Belgium has a grand history, not all of it glorious. Much of Flanders, including the once-great city of Ypres. was flattened in World War I or World War II.

Oostende, where Silver Cloud docked this morning, was leveled by Allied air raids against the German occupiers in World War II and was rebuilt–but the result is mostly a city of the 1950s and 1960s, which is not my favorite architectural period.

The trick in Oostende is to look carefully between the featureless box buildings for the relatively few surviving old facades.

In Ypres, the city was reduced to rubble by shelling in the awful Great War. But here, the core of the medieval city was painstakingly recreated. It is quite easy to forget that the spectacular Gothic structures–some from the 15th century–were reconstructed less than 100 years ago.

And there is beautiful Bruges, one of the most magnificent cities of the world. It is very much a veritcal town; visitors who keep their eyes at street level miss half of the sights. 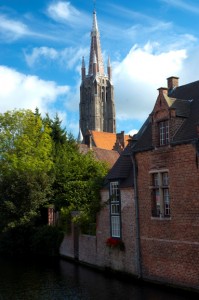 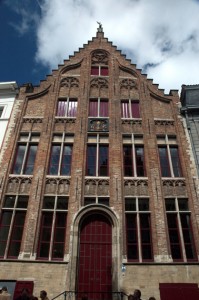 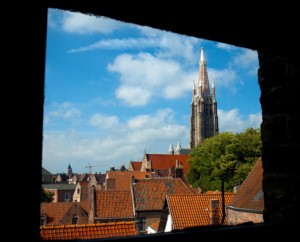 Oostende is a place where you need to look between to see history. The Belgian port was heavily bombed in World War II by the Allies, and also by the retreating German forces. It was not rebuilt in its old style, and so you must instead look for vestiges sandwiched between modern (and undistinguished) structures of the 1950s and later. 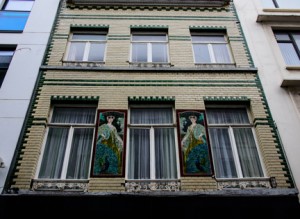 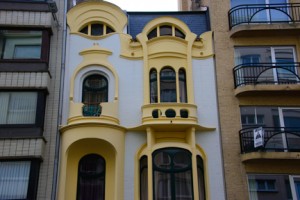 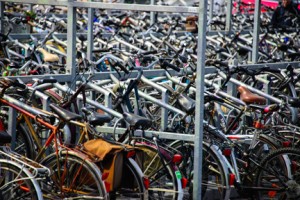 Parking lot in Oostende outside the Central Station. Trains run to Bruges and Ghent. There’s also a coastal tram that does north and south to the Netherlands and France.

I made a visit to Ypres in the Flanders region of Belgium. These were the almost indescribaly horrific killing fields of World War I.

Just as one example, more than 400,000 soldiers were killed in 100 days in fighting over a few miles of mud near the insignificant village of Passchendaele (now known as Passendale). 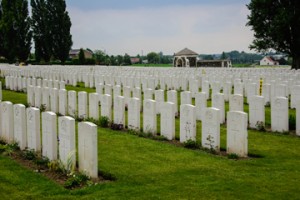 Part of the Tyne Cot cemetery near Passendale, where more than 11,500 soldiers from Commonweath nations are buried.

After the Second Battle of Ypres in 1915, when German forces unleased a lethal barrage of explosive and gas weapons, the Canadian doctor John McCare wrote a poem that has lived on as a truly evocative memorial to World War I. The poem was, “In Flanders Fields.”

In Flanders fields the poppies blow,

Between the crosses, row on row,

That mark our place; and in the sky,

Scarce heard amid the guns below.

Ypres itself is an astounding place. About five million British and Commonwealth soldiers pased through Ypres on their way to the Salient–a wrinkle in the front line that the Allies were determined to straighten while the German Forces were trying to encircle and cut off the troops who were there.

The city, home of some great structures that date back to the 14th and 15th century, was almost completely destroyed by German shelling. And yet, today, it is there to be seen.

It is hard not to forget that nearly everything in Ypres has been reconstructed in the last hundred years. Some buildings were not completed until the late 1960s. And even today, hundreds of tons of century-old weapons are still being found in the fields of Flanders; every few years an unfortunate farmer or a misguided collector becomes yet another victim of the truly misnamed Great War.

Here are parts of Ypers today. 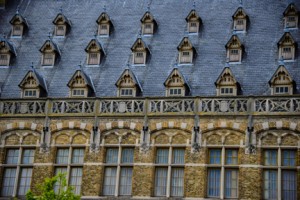 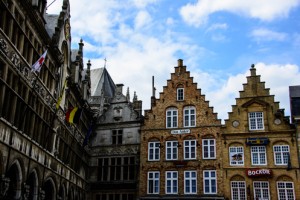 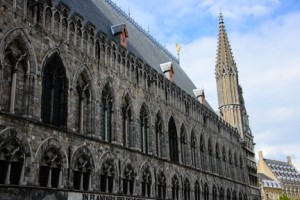