We have arrived at the end of our cruise from Iceland, reaching the glorious cosmopolitan city of Montreal, one of the most diverse and vibrant places on the planet.

Under a spectacular blue sky, we went for a hike up The Main, Boulevard Saint-Laurent. Here are some of the sights of today:

The singer-songwriter Cheryl Wheeler has a lovely song called “When Fall Comes to New England.” It is a piece of musical poetry about the spectacular colors and atmosphere of this part of the world in autumn,

The nights are sharp with starlight

And the days are cool and clean

And in the blue sky overhead

The northern geese fly south instead

And leaves are Irish Setter red

It is next-to-impossible to predict when the leaves will turn from green to red and yellow, or when the first frost will add icing to the fields. But we can hope.

This part of the world is where we live when we are not aboard ship, and we are very partial to this place and this time of year.

This cruise begins in Montreal, and then we are due to stop in Quebec City and Tadoussac on the Saint Lawrence River before beginning to head down the coast.

We will call at Charlottetown, Prince Edward Island and then nip into Les Iles-de-la-Madeleine, the Magdalen Islands. This isolated archipelago is not quite French, not quite Anglophone, still holding on to some of its Acadian and colonial past.

From there we head over to Nova Scotia for calls at Louisbourg, the site of a massive French fortification that failed to prevent the British advance into Canada. And then to the big city of Halifax on that island.

Entering into New England proper, we are due to visit Bar Harbor, Maine and then make an appearance in Salem, Massachusetts which does not often receive cruise ships.

Our ship is due to sail into Cape Cod Bay and then transit the Cape Cod Canal to make a call at Oak Bluffs on the resort island of Martha’s Vineyard.

And then at the end of the cruise, an early morning all hands on deck sail-in to New York City.

We’re back in the great cosmopolitan city of Montreal, a city that on its face is very French.

But it is truly Quebec’s melting pot.

In the most recent census, Francophones were estimated as 49.8 percent of the population, followed by English at 22.8 percent. And the rest? Just about every language, ethnic group, race, and heritage cheek-to-jowl.

The diversity brings a wonderful vibrance to the culture: music, theater, and food.

Here in the province of Quebec, we have learned the local definition of autumn: it means winter is coming soon. Temperatures are already below freezing by night and just barely above by day. But few places are as vibrant this time of the year.

For those guests leaving us here, safe travels. And welcome aboard to new friends. 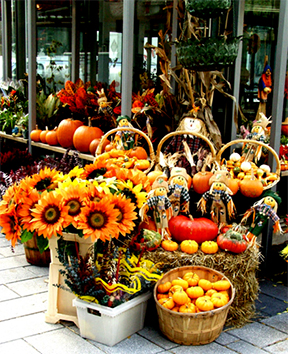 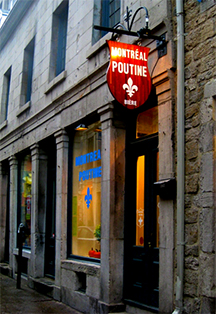 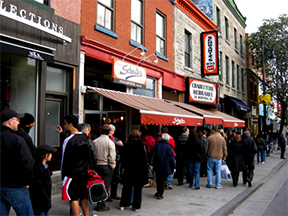 We are set to make one more journey eastbound on the Saint Lawrence River and then down the northeast coast of Canada and the United States and once more into New York harbor. 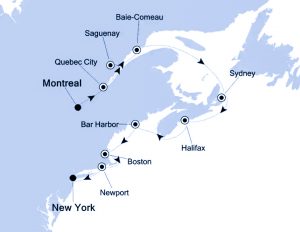 We have arrived at the riparian end of our river-to-ocean-to-river cruise, from New York to Montreal.

Montreal is a bustling, handsome, cosmopolitan city on the Saint Lawrence where they happen to speak French. Mostly, that is. They also speak English along with a dozen or more languages of immigrant populations plus those of a few indigenous people. 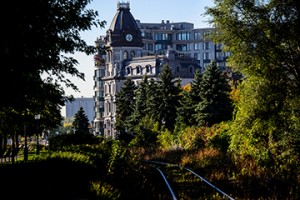 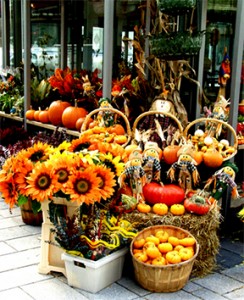 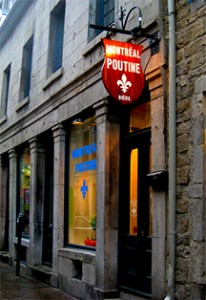 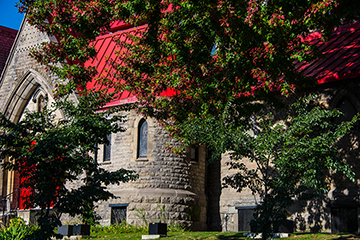 To guests leaving us here, à la prochaine fois. Until the next time we meet. Or, as an Italian vessel in Canadian waters, arrivederci.

And welcome aboard to new friends. We leave tonight heading east on the Saint Lawrence River and then back out into the North Atlantic and around the corner to the Hudson River and New York City. Here’s our plan: 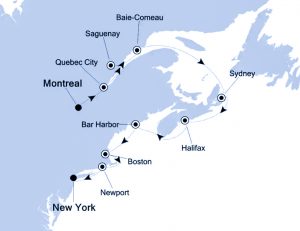 Quebec is one of the most glorious cities in the world, a mix of the heritage of New France of the 18th century with modern French arts, couture, and cuisine…put through the blender of the Quebecois culture.[whohit]-MONTEAL2 TURNAROUND-[/whohit] 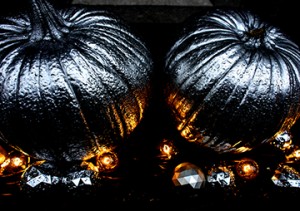 It rained a bit in the morning, then turned clear and cool in the afternoon. No one seemed to mind getting a bit wet or a bit cold: Quebec City fills us all with warmth. 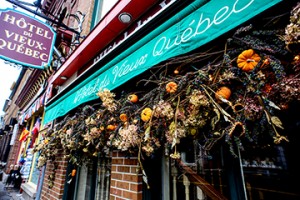 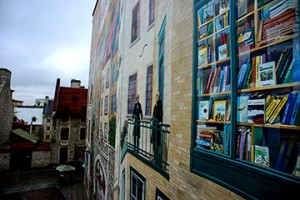 Between (Canadian) Thanksgiving and Halloween in Quebec City. Photo by Corey Sandler

Today, we say goodbye to many new and old friends who are disembarking in Montreal. And we say welcome aboard to a new group as we prepare to head back out of the Saint Lawrence.

With this call in Montreal, Silver Whisper begins the final leg of 2013 fall colors tours in New England and the Canadian Maritimes. We are headed back to Quebec City, then up the Saguenay River to La Baie, and on to Charlottetown, Sydney, Halifax, Bar Harbor, Boston, and Martha’s Vineyard. We’ll finish up with a grand procession on the Hudson River to the New York Cruise Terminal. 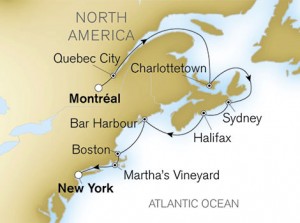 Food in Montreal is always a treat, although not all cuisine is haute. At left, the line forms in front of Chez Schwartz for smoked brisket on rye. At right, the peculiar Quebec favorite of poutine: french fries, cheese curds, and unidentified brown sauce. I’ll take Schwartz’s anytime. Photos by Corey Sandler

I hope you’ll join me here in the pages of my blog.

All text and photos copyright 2013, Corey Sandler. If you would like to purchase a photo, please contact me.

We arrived this morning in Montreal to a second consecutive spectacular fall day. We deserve it.

About 300 our guests will be disembarking and heading home. More than 50 will stay with us as we head back out on the Saint Lawrence and then turn south toward Nova Scotia, Boston, and then west to New York. [whohit]-MONTREAL-[/whohit]

Safe travels for those heading home…happy to see friends who are staying, and welcome aboard to our new guests.

Here’s our next cruise: from Montreal to New York by way of Charlottetown, Halifax, Boston, and Martha’s Vineyard.

Montreal is the second largest French-speaking city in the world, after Paris.

You can quibble about a few francophone cities in Africa that have more residents—Algiers and Kinshasa amongst them—but French is not the mother tongue there.

The metropolis of Montreal is truly cosmopolitan.

Think of it as a large, exciting city where most of the inhabitants happen to speak French.

Pointe a Calliere, near the Old Port of Montreal where we are docked. Photo by Corey Sandler

Montreal is Canada’s has about four million habitants in its metropolitan area; it is the second largest city of Canada, after Toronto.

The French language is spoken at home by about 66 percent of Montreal residents, followed by English at 13 percent.

I have described Montreal as a cosmopolitan city, though, and that is very much true. 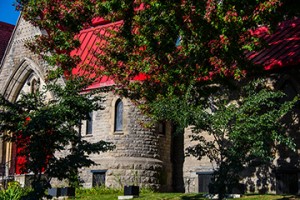 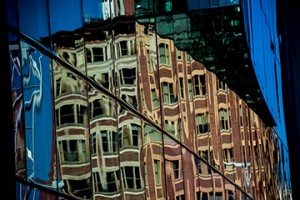 Reflections of autumn in Montreal. Photos by Corey Sandler

Quebec is Canada’s largest province. Only Nunavut, which is governed as a territory, is larger.

When you walk the streets of downtown Quebec, there are more than 1,200 miles between you and the province’s northern boundary along Hudson Strait.

Unlike most Canadians I’ve been up there, and let me tell you: Ivujivik looks nothing at all like Montreal.

And they don’t speak much French up there, either: northern Quebec is the home of the Inuit and a lot of caribou, seals, and polar bears.

For us, we’ll enjoy haute cuisine aboard our five-star hotel as we sail from French Canada to Acadia, New England, and New York. There are more than a few languages, accents, and local peculiarities ahead: stay tuned.