From Europe to North Africa.

And there we find not one but two pieces of Spain hanging on—against logic and against protest—to the bottom of Morocco. Ceuta and Melilla are the last vestiges of Spanish Colonial rule in northern Morocco. 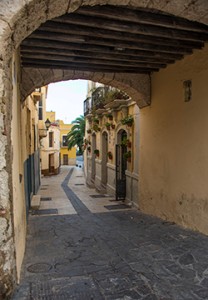 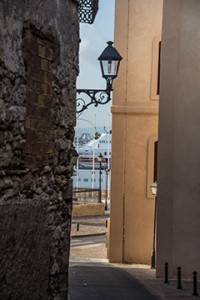 The winding alleys of the old city above modern Melilla. At right, Silver Wind can be seen at the dock below. Photos by Corey Sandler

Melilla is on the north coast of Morocco, about twice the size of Gibraltar but still a very small place: about 12 square kilometers or 5 square miles. Ceuta, closer to Casablanca and to Gibraltar on the other side of the strait, is slightly larger. Between them they are home to about 120,000 people.

They have been exclaves of Spain for more than 500 years.

And Madrid insists it will not relinquish control of either.

Gibraltar and Spain’s Ceuta and Melilla are not exactly mirrors of each other, but they are in some ways similar.

Centuries of colonial rule has resulted in communities that are markedly different from the countries to which they are attached.

And in both place politics and nationalism long ago trumped any attempt at logic and diplomacy.

Melilla has a population of nearly 79,000 people, a mix of Christians, Hindus, and Muslims with a small Jewish population. 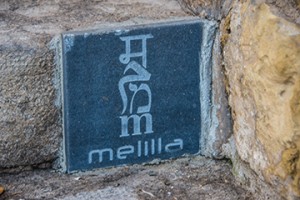 The symbol of Melilla is the letter “M” in Hindi, Arabic, Hebrew, and Roman characters. Photo by Corey Sandler

This is Spain, so Spanish is the official language.

But many also speak Tarifit or Rifeño, a Berber dialect of the Riffians.

There’s a bit of French, too, that has leaked across the border from Morocco.

Riffian is a Northern Berber language, spoken by about 4 million mostly Muslim people in North Morocco and nearby Algeria as well as a few tens of thousands in Melilla. 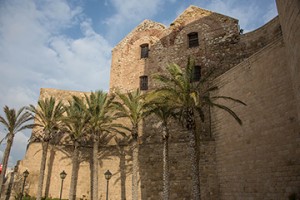 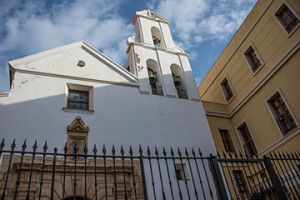 Old Melilla is on the high ground, overlooking the modern city and port. Photos by Corey Sandler

Northern Morocco and Melilla includes an unusual mix of DNA, including Viking or Nordic lineage. Many Riffians have lighter skin, lighter colored eyes, and other traits that are not common in Africa and different from Sicily, Sardinia, and other parts of southern Europe. Blond hair is relatively common, and red hair also found in higher numbers than might be expected.

Melilla has a history of its own, somewhat different from Morocco and Spain.

It was a Phoenician and later Punic settlement under the name of Rusadir.

From the Greeks it passed to the Romans as a part of the Roman province of Mauretania Tingitana.

Successive rulers included the Vandals, the Byzantines, and the Visigoths.

As Muslim tribes came to the area and then crossed over to Andalucia in Europe, Melilla became part of the Kingdom of Fez.

Which brings us to the 1490s, when the Catholic Monarchs Isabella I of Castile and Ferdinand II of Aragon sought to take the city. In 1497, a few years after Spain had ousted the Nasrid Kingdom of Granada—the last Muslim stronghold of Al-Andalus—an invasion force conquered Melilla with little resistance.

But the Muslims in Africa sought to take back the lands they had held in the Magrehb. Melilla was under siege from 1694 to 1696 and again from 1774 to 1775. But Spain held on. The current limits of the Spanish territory around the fortress were fixed by a series of treaties with Morocco in the second half of the 19th century. 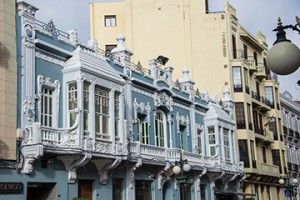 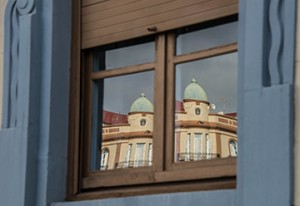 Modernism on the street and as reflected in the windows of the Spanish Ministry of Defense. Photos by Corey Sandler

Melilla and other parts of Spanish Morocco were used by General Francisco Franco as staging grounds for the Nationalist rebellion in 1936, starting the Spanish Civil War. A statue of Franco—said to be last like it in Spain—is still prominent in Melilla.

Since Melilla is part of Spain, emigrants regularly try crossing the border to stake a claim in the European Union.

Spain has spent a huge amount of money for border fences, crosspoints, and patrols. The Melilla double border fences are six-meters or 20 feet tall. Yet refugees frequently manage to cross it illegally.

Detection wires, tear gas dispensers, radar, and night vision cameras are planned to increase security and prevent illegal immigration.On the day of our visit, we heard warning gunfire and saw low-flying fighter jets above the border. 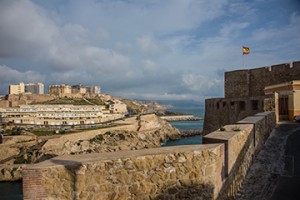 A section of the border fence is visible from the ramparts below the old city. Photo by Corey Sandler

There is a similar border fence between Morocco and the other Spanish city at Ceuta.

With the land side now sealed off more securely, refugees have instead been crossing the Mediterranean in ramshackle boats.

They originally started going via the Canary Islands, but patrols increased there too and now they end up landing primarily in Italy—including Lampedusa Island—and Malta.

Although we certainly are welcome in Melilla, tourism is not the heart of the economy. The principal industry is fishing. 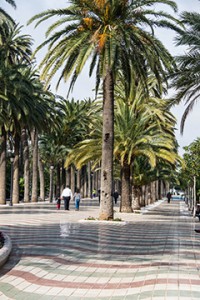 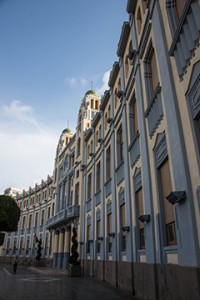 We have our sea legs. Elsewise the tile pavement at Parque Hernandez could have caused a problem. At right, the grand Ministry of Defense. Photos by Corey Sandler

As a prosperous port with a lot of interaction with the mother country, Melilla was built up in the first part of the 20th century with many Modernist structures, the Catalan version of Art Nouveau.

The small exclave is said to have the highest concentration of Modernist works in Spain after Barcelona. Architect Enrique Nieto designed the main Synagogue, the Central Mosque, and various Catholic Churches. 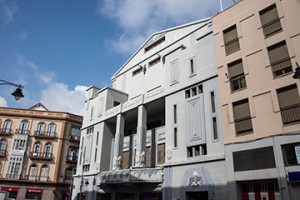 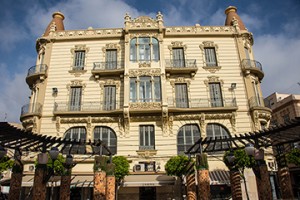 Some of the Modernist architecture of Melilla. Photos by Corey Sandler

Some of the best Modermismo architecture can be found on calle López Moreno and calle del Rey Juan Carlos.

Melilla has been spoken of as a multicultural exemplar, a small city in Africa with three major religions represented. However, the Christian majority of the past—about 65 percent at one point, has been shrinking—while the number of Muslims has steadily increased to about 45 percent.

Jews, who had lived in Melilla for centuries, were about 20 percent of the population before World War II. Now Jews are less than 5 percent, departed for Israel, South America, and elsewhere. There is also a small, commercially important Hindu community.

Cross-border trade is an important part of the economy of Melilla, even though the border is tightly guarded. Nearly every day, dozens of women pass through the pedestrian-only border crossing at Barrio Chino.

They are known as the Mule Women of Melilla, or more kindly as porteadoras.

As long as a porteadora can physically carry her load, it is classed as personal luggage, so Morocco lets it in duty-free.

The women have the right to visit Melilla because they live in the Moroccan province of Nador. But they are not allowed to reside in the Spanish territory.

Traders in Melilla prepare huge bundles to go to North Africa: second-hand clothing, bolts of fabric, toiletries, and household items. The bales are wrapped in cardboard, cloth and sacking and fastened with tape and rope. A typical load might be 60 kilograms or 132 pounds; some as much as 80 kilos or 172 pounds.

For carrying the bundle across the border, a porteadora might be paid 3 Euros; some make three or four trips before the gates close at midday. This is not small business; one estimate is that the trade is worth about 300 million euros to Melilla.

And now the tradition of women as mules is under threat from unemployed Moroccan men. The women are objecting, but losing that battle.