We sailed into the dramatic harbor of Marmaris is the predawn darkness and then saw that even with the sun above the horizon the skies were dark and threatening.

I consulted the maritime weather forecast, full of details about satellite imagery, barometric pressure, and reports from throughout the region and as a modern human I was convinced that we were in for a 100 percent chance of a dismal day.

By the end of the day, I was convinced that life 4,000 years ago had been so much simpler. Forget about Accuweather and fancy scientific tools. I love animals, and I’m not about to sacrifice a goat (or a cat–of which there were thousands wandering about–but I did bring an umbrella and a raincoat and a box full of disposable ponchos for the guests. And because of all that preparation, we were treated to a bright and mostly sunny day.

Here are some photos I took on our visit: 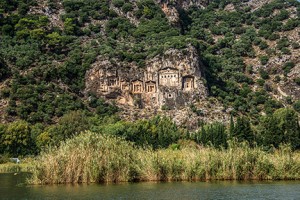 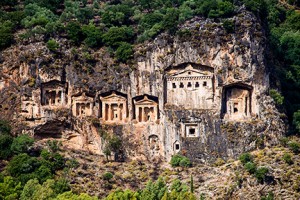 The Rock Tombs of Dalyan. Photos by Corey Sandler

About an hour away is the town of Dalyan, and the rock tombs near Caunos. At Caunos you can see Hellenistic fortifications, remains of tower and a gateway on Acropolis Hill, a Palaestra, Theatre, and Byzantine Church. And most dramatic, a set of tombs carved into the rocks near the town. 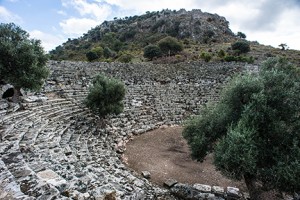 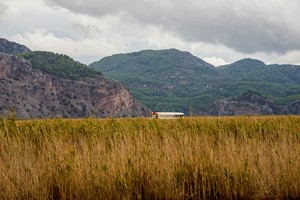 The ancient Greek theatre of Kaunos, and a river boat passing through the reeds of the Dalyan River below. Like many cities of antiquity in this part of the world, this had once been the seafront. Photos by Corey Sandler

All photos by Corey Sandler. All rights reserved. If you would like to purchase a high-resolution copy, please contact me.