When we start a cruise, the captain is given his instructions. The navigator prepares charts (mostly electronic these days) that are intended to take us to each of the ports of call. And a computer program calculates the necessary speed for the ship to make it from point to point.

And then stuff happens.

High winds, rough seas, whales in our path, the occasional mechanical problem, and traffic getting in and out of ports.

It’s all part of the adventure of going to sea.

We were scheduled to go to Natal, up on the shoulder of Brazil. But a few days ahead of our call, our captain was informed that the port was doing some work on the pier and we had no place to dock.

So instead, we headed for Maceió, a dot on the map of the huge country of Brazil. Few of us had even heard of the place.

Brazil is the largest country in South America, and home to more than 208 million people.

That dot on the map that is Maceió, is home to more than a million people.

Oh, and one more thing. A few days ago in the small seaside village of Buzios, the chain attached to one of our ship’s 7-ton anchors snapped. The chain and the anchor disappeared into the silt on the bottom of the harbor and despite several hours of searching by divers they could not be found.

We sailed on without the anchor and hundreds of feet of chain.

We have a second anchor and chain, on the port side. And we carry a spare anchor on the foredeck of the ship.

And so part of the day in Maceió—for the crew—was devoted to working with a shoreside crane to lift the extra crane onto the pier and then attach it to the chain.

The process is much, much more complex than changing a flat tire. 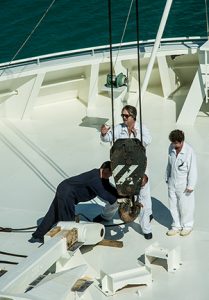 A crane on the dock attaches to the spare anchor on the foredeck. 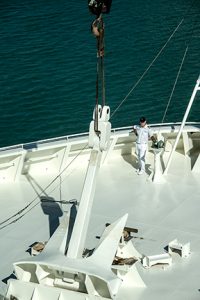 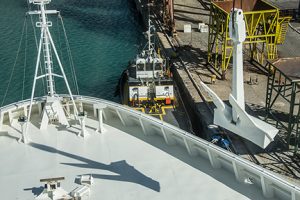 Over the side to the dock, where the anchor was attached to chain from within the ship,

All photos by Corey Sandler, 2017. All rights reserved.

Maceió is an indigenous word that means puddles or ponds of water, and there are many.

Some form lagoons and others flow into the sea.

The reason for the water is prodigious rainfall up in the hills.

The reason for Maceió and Natal was location, a straight shot southwest about 1,800 miles from Dakar, Senegal.

The Dutch moved south from Suriname and set up sugar plantations and mills in the early 1600s. They also attacked and occupied parts of Natal and Fortaleza,

And the story is that local Portuguese settlers took to the hills to avoid the attack.

And then came a prodigious rainfall, which caused landslides and flooding and pushed the Dutch away.

Along the coast are local sailing boats, called Jangada, which once existed in most of Brazil before the Europeans arrived.

They have a high, curved bow which allows them to breach high seas, and a sail—similar to a lateen—that allows sailing very close to the wind.

They are very advanced in that feature but that design dates back all the way to Ancient Greece.

When the Portuguese came to Brazil they banned the use of the jangada because they were deemed to be a threat to the colonial power’s ability to govern. The only area to hold onto the design was norther Brazil, a region that went back and forth between Portuguese and Dutch control many times in the early 17th century.

Later today—we hope with a new anchor in place—we plan to move on to our final destination in Brazil, Fortaleza.

Another dot on the map: more than 2.3 million residents, the largest of Brazil’s northern cities.