Travemünde is a borough of Lübeck, Germany, at the mouth of the river Trave, with a population of about 13,500 residents and many thousands more summer tourists.

The settlement began as a fortress built in the 12th century by Henry the Lion, Duke of Saxony, to guard the mouth of the Trave, which leads inland to the city of Lubeck.

The Danes subsequently strengthened it. Those fortifications were taken down in 1807 as Travemunde became a popular seaside resort.

And so today, what had been a fishing port and then a Hansa trading port is mostly luring tourists.

Excluding the interruptions of the two world wars, that role continued even during the years of a divided Germany. It is not quite at the mega-yacht level of Saint-Tropez, and that is a good thing because the city has retained or restored its old-world appearance.

At the end of World War II, Germany was split into two quasi nations, the Federal Republic of Germany—known to the outside world as West Germany, and the German Democratic Republic, or East Germany, a puppet state of the Soviet Union.

And Travemunde ended up right on the line.

Until 1989 the border between East and West German was behind the Priwall, the spit of beach across from the town. Most of Priwall was a military area and off-limits to the public.

Most of the world’s attention was focused on the concrete and barbed wire wall erected between the Russian and the other sectors of Berlin, the capital city that sat like an island inside of East Germany.

Here at Travemunde, the border fencing and walls were erected much earlier, beginning in 1952. It was referred to as the Inner German Border, no less real than the Berlin Wall but not much noticed outside the region.

Nearly 50,000 East German guards were charged with watching – day and night – what East Berlin termed the “anti-fascist protection wall” (although all fortifications were directed against the east).

On the other side, another 20,000 West German border police and customs officials monitored the “zone border”, a name reflecting Bonn’s official position of refusing to recognize the division or the other German state to the east.

Before you could reach the metal fence that was the official line there were a number of other barriers.

Towns and roads from one to five kilometers away from the border, half a mile to three miles away, were considered restricted zones and free travel was difficult. People considered “politically unreliable” or likely to flee, were removed from the restricted zone in two waves of forcible resettlement, in 1952 and 1961.

Then came a control strip, a signal or trip wire fence, and then a 500-meter or 1,800-foot-wide protective strip monitored by armed guards in watchtowers equipped with high-intensity floodlights.

By one estimate, nearly a thousand people were killed trying to escape from East Germany across the inner border.

Up the river Trave, about 15 miles away, is Lübeck in the Schleswig-Holstein region. It was the leading city of the Hanseatic League, and became a very wealthy place through trade.

Mostly rebuilt after the war, it includes a large collection of Brick Gothic structures, and the entire city—population about 219,000—is on the UNESCO World Heritage Site list.

I went today with guests for a revisit, and after enduring a rain storm of biblical proportions, we enjoyed a stroll through the wet streets and coffee and marzipan at the famed Niederegger cafe.

All photos and text Copyright 2019 by Corey Sandler, all rights reserved. See more photos on my website at http://www.coreysandler.com

Actually, there’s a wonderful musical coincidence here: “Hello, Goodbye” was the name of one of the many hits by a rough-and-tumble rock-and-roll band from Liverpool.

You know them as The Beatles, but they went by a number of names from 1960 to 1962 when they underwent an intensive round of hardscrabble engagements in the Red Light District of Hamburg.

They played the Star-Club, Kaiserkeller, Top Ten, and Indra.

The Beatles: John Lennon, Paul McCartney, George Harrison, Stu Sutcliffe, and Pete Best played at strip clubs and dank beer joints in Hamburg. (Sutcliffe would leave the band to pursue a career in art, and Best would be replaced by Ringo Starr once the group began iuts ascendancy to the Rock Pantheon.)

The clubs (and the “sex workers”) are still there, joined by a modern sculpture immortalizing the band, at Beatlesplaatz.

The symbolic heart of the city is the Rathaus or Town Hall.

It is a substantial, in-your-face neo-Renaissance structure completed in 1897. Like much of central Hamburg, the Rathaus was heavily damaged in World War II air raids, but was restored by 1957.

It still holds the office of the Mayor and the meeting places for Hamburg’s parliament and senate.

The immense building has about 647 rooms (six more than Buckingham Palace). I say “about” 647 rooms because it’s apparently hard to keep count.

In 1971 a room in the tower was discovered accidentally during a search for a document that had fallen behind a filing cabinet.

Hamburg was nearly flattened by bombing by the Allies seeking to destroy the industrial facilities including shipbuilding and submarine pens, as well as other industries.

And there was also the Neuengamme concentration camp, about 15 kilometers or 10 miles southeast of the center of the city.

By the end of the war, more than half of its estimated 106,000 prisoners had died: about 50,000 dead. The camp served the needs of the German war machine and also carried out exterminations through labor.

As if that was not enough, consider this: on April 26, 1945, about 10,000 surviving prisoners from Neuengamme were loaded into four ships: the passenger liners Deutschland and Cap Arcona and two large steamers, SS Thielbek and Athen.

The prisoners were in the ships’ holds for several days without food or water.

On May 3, 1945, the ships were attacked by three squadrons of Royal Air Force Hawker Typhoons. The RAF believed the ships carried SS personnel who were being transferred to Norway.

Intelligence that the ships carried concentration camp prisoners did not reach the squadrons in time to halt the attack.

On May 8, 1945—five days later—most German forces surrendered and the war in Europe was over.

I spent the day on a shore excursion in Lübeck, about an hour from Hamburg up the Elbe River.

The entire town is a UNESCO World Heritage Site, with nearly 2,000 landmark buildings including St. Mary’s Church from the late 12th century and home to the world’s largest mechanical organ.

It is a handsome place, the City of Seven Spires. There are many more churches than that–some dating back five hundred or more years–but seven steeples remain. 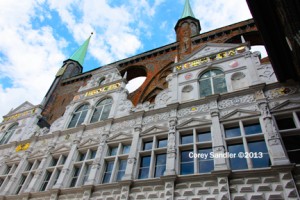 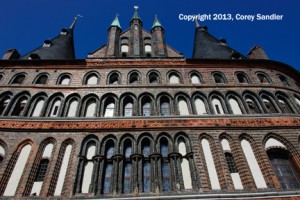 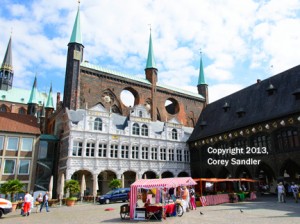 Around town in Lubeck 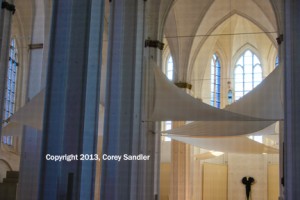 Inside the shell of St. Petri Church 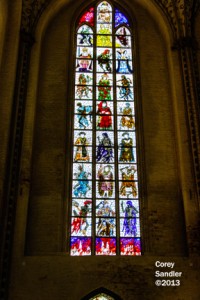 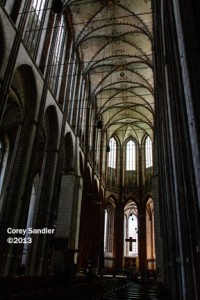 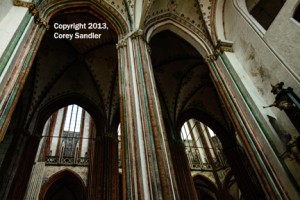 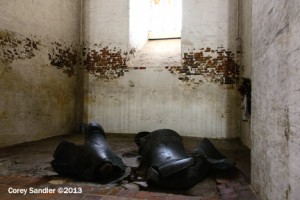 St. Mary’s Church was the pride of the town. It was all but destroyed in an air rad in 1942–those big clumps of metal above are the remains of the original bells, preserved within a chapel.

The stained glass windows are a modern version of the Dance of Death or the Danse Macabre of Bernt Nottke. At the bottom were added two scenes of St. Mary’s in flames. 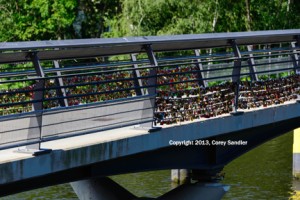 Lovers’ Locks mounted on a pedestrian bridge in Lubeck. The idea is for a couple to get a lock, paint or chisel their names on it, and then toss the key in the river. I imagine there has to be an occasional re-visit with a jeweler’s saw or mechanical cutter for good love, gone bad.

(And I also thought of the bridges in Venice, I was there a few weeks ago, and the locks are weighing down the ancient bridges.)