Izmir is Turkey’s third-largest city, home to more than four million people in its metropolitan area.

Depending on political or religious or historical points of view, some call Izmir “The Infidel City.”

That is a reference to its former history, when it was known as Smyrna, and to the Ottomans it was very much not an Islamic city.

Today, some residents wear that old nickname as a badge of honor for a relatively progressive city in modern Turkey.

Known for most of its history as Smyrna, in Ottoman times it was a melting pot that included substantial numbers of Greeks, Armenians, Jews, French and Italians.

Smyrna was renamed as İzmir in 1930, and today is predominantly Turkish. The modern name derives from the phrase εις_Σμύρνην or “is Smirnin”), which means “to Smyrna” in Greek.

Here are some photos I took today in Izmir, along the Kordon and in the ancient bazaar. 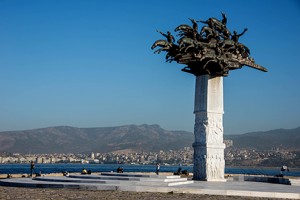 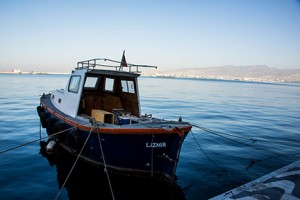 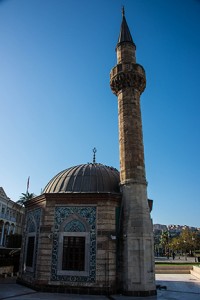 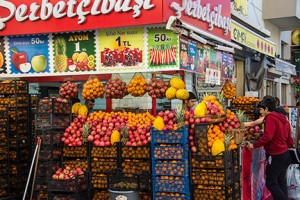 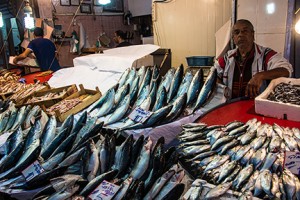 One great way to appreciate life in Izmir is to stroll the Kordon, the seaside promenade, lined with cafés, bars, and shops. You’ll pass the neo-Classical Ataturk Museum, a grand battlefield statue of Ataturk, in Cumhuriye _Square and Ottoman-era buildings.

It’s a pier, not a tower. But it was originally designed by Gustave Eiffel in 1890 for French interests. Konak Pier was a long wharf and warehouse of stone with glass and steel coverings. A 2003 restoration made it into a relatively upscale shopping mall with boutiques and cafés.

Nearby at Konak Square is the Clock Tower, a delicate minaret-like structure. Four fountains surround the base; the columns are inspired by Moorish themes.

Designed in 1901 by French architect Raymond Charles Père, another symbol of Izmir’s longstanding ties to the West, it commemorates the 25th anniversary of Abdülhamid II’s accession to the throne. He reigned from 1876 to 1909 when he was deposed by the Young Turks, near the end of the Ottoman Empire.

On the other side of the square is the second tower of Konak, the mini-minaret of the 18th century Yali Mosque. The small octagonal building is decorated within by ornate blue porcelain tiles.

If you would like to purchase a high-resolution copy of any of my photos please contact me.