Harstad may not be quite what you imagine when you think of a visit within the Arctic Circle.

And yes, even on Midsummer Day in late June you can see the memory of winter past up on the mountains and feel in the air the hint of winter to come.

The Northern Lights are spectacular, and this is one of the best places in the world to see them. Except, of course, at this time of the year because the sun never sets.

For the next eight days we will not see true darkness.

Harstad developed as a herring and fishing port in the 19th century.

Population about 24,000, Harstad is located on Hinnoya, the largest island in Norway.

One of its more famous sights is the Trondenes Church, the northernmost medieval stone church of Norway.

There is a bit of uncertainty about exactly how old it is; some call it a 13th century structure while modern scientists date its construction to about 1434.

This relatively small parish church was the main religious center of Northern Norway for a period during Medieval times.

The church is especially known for its rich decorations, including three gothic triptychs, one of which was made by the German Hanseatic artist Bernt Notke or by his workshop.

If you’ve traveled in Scandinavia or the Baltic you’ve likely seen other works by Notke, not nearly as hidden-away as this one.

Notke’s most famous work is his sculpture of Saint George and the Dragon) for the Storkyrkan in Stockholm. There’s a copy in Lübeck.

Parts of his Danse Macabre for Reval are on display at Saint Nicholas’ Church in Tallinn, Estonia.

The baroque pulpit is equipped with an hourglass to allow the minister to time long sermons, or perhaps to enforce a limit. 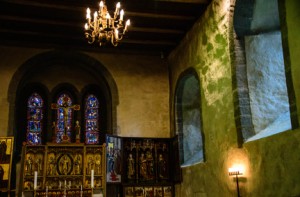 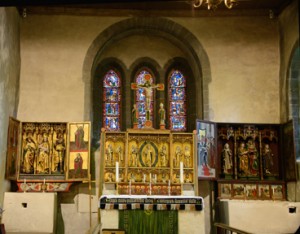 She allowed me to hold it for a moment, but not to stray. Apparently there is only one key still in existence. 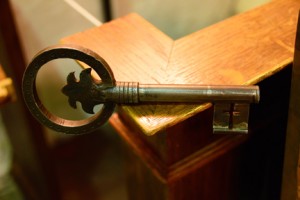 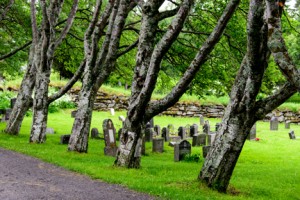 Harstad was another obscure battle site of World War II.

British and Free French naval forces battled German occupiers who were holding the port of Narvik in early 1940.

And from Harstad, Norwegian General Carl Gustav Fleischer led the Norwegian Armed Forces in a successful retaking of Narvik in May of that year.

However, Norway would eventually fall fully under control of the Nazis.

As part of the Axis defenses, Germany installed four of its huge Schnelladekanone guns, also known as the Adolfkanone or Adolf Gun.

After 1941, when Germany invaded the Soviet Union and pushed Russia back onto the side of the Allies, Harstad became the seemingly unlikely place for a prisoner-of-war camp.

Some 3,000 Soviet soldiers were held in a very difficult and unsanitary compound near the Trondenes Church.

They were forced to work on the construction of the massive platforms for the huge guns. And 800 of them died in the process.

The Russians were at first buried in the churchyard, but later moved elsewhere in Norway—never returned home. A few decades ago, the Soviet Union erected a monument in their memory here. 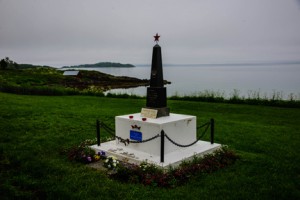 Back in Harstad, we happened upon the Festival of the Norwegian North, which coincides with Midsummer Week.

There were melancholy rock bands (Goths in the land of the Vikings?).

We were also entertained by the youngest marching band I have ever seen. They were, uh, enthusiastic.

And I believe I saw Professor Harold Hill of The Music Man at the front of the somewhat ragged march. 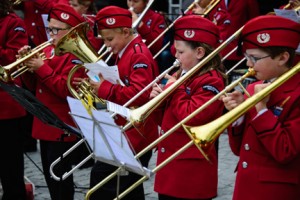 And then for something completely different: the Pink Invasion.

I’ll let my pictures speak for themselves, except to say that they made Cirque du Soleil seem quite tame.

They were a different Mood of Norway. 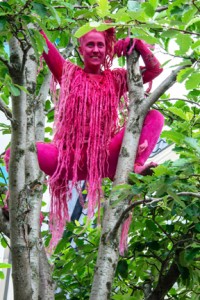 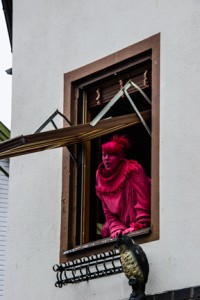 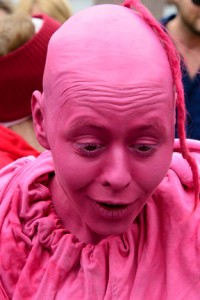 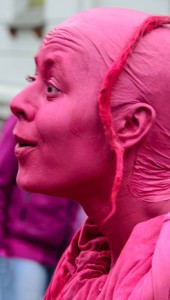 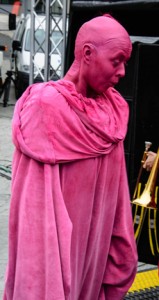 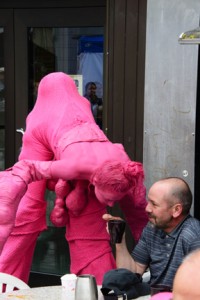 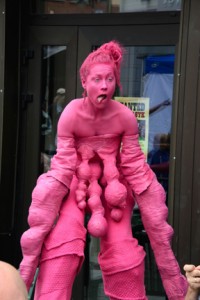 All photos Copyright 2013, Corey Sandler. If you would like a copy, please contact me through the Order a Print tab on this blog.