Deeper into the Fjords of Norway

We head inland from the Norwegian Sea on one of the most spectacular watery highways into the interior of coastal Norway.[whohit]-Geiranger 30Jun-[/whohit]

Silver Whisper followed a twisting and turning pathway along the big Storfjorden, then into the smaller Sunnylvsfjorden, and finally the even narrower Geirangerfjorden.

On our way in, we made a brief stop in Hellesylt to allow guests to debark for an overland shore excursion that reunited with the ship at Geiranger, at the dead end of the fjord. The fjord, which includes sheer cliffs, impressive waterfalls, and patches of green and white, is one of Norway’s most visited tourist sites, a UNESCO World Heritage Site. 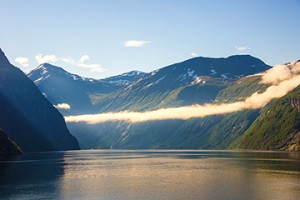 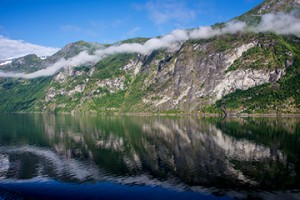 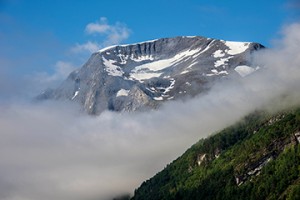 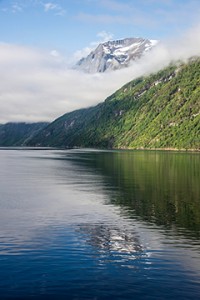 In the fjords near Hellesylt. Photos by Corey Sandler 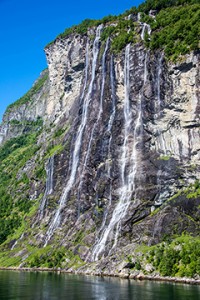 The Seven Sisters waterfall between Hellesylt and Geiranger. Photo by Corey Sandler

The town of Geiranger is a pleasant little place in a spectacular setting.

This isolated little town is the third-busiest cruise ship port in Norway. As many as 180 ships visit during the four-month tourist season, depositing as many as 300,000 passengers—not all at once—in Geiranger, which has a permanent population of about 250.

As I said, it’s a beautiful set of fjords and a handsome, peaceful place.

Except: it is under constant threat of severe damage or even total extinction. Scientists worry that a big piece of a mountain called Åkerneset could one day collapse into the fjord.

And, they say, this would cause a tsunami that could destroy downtown Geiranger. Studies indicate as much as 100 million cubic meters or 130 million cubic yards of rock and earth could collapse. They estimate the tsunami would be about 30 meters or 98 feet high.

We hope the people of the fjord (and those of us aboard ship) are spared that particular bit of excitement. 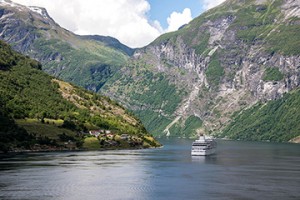 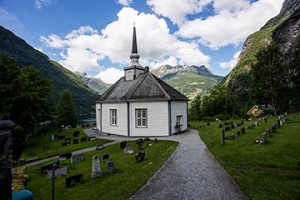 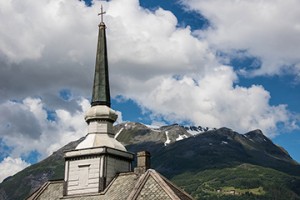 Silver Whisper at anchor in Geiranger. We climbed up the hill for a better viewpoint, stopping at the picture-perfect Geiranger Church, built in 1842. Photos by Corey Sandler

It was a day of clouds and cloudberries, of mist and fog and a glimpse of one of the stranger stories of World War II.

We saw more waterfalls and lakes and peaks than I could count, and there were also long stretches where all we saw was a whiter shade of pale.

Silversea Silver Cloud entered into the great Storfjord north of Bergen early in the morning and then pulled into a dock at the tiny town of Helleysylt. There about 90 guests (about one-third of the passengers on our small luxury ship) debarked for a journey to the Roof of Norway. 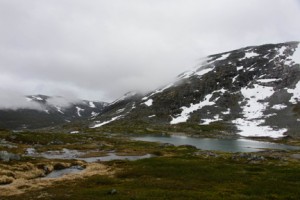 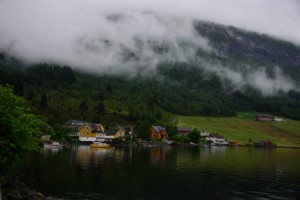 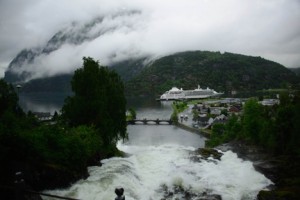 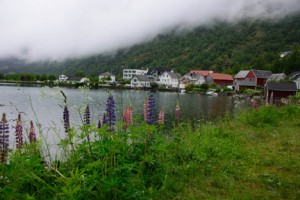 We were heading for Honningsdalen Lake—said to be the deepest lake in all of Europe—and then on to the town of Stryn and then Grottli before ascending up the impossible road to Dalsnibba.

For us, though, we would rise 1,500 meters or more than 4,700 feet to a world of rivers and waterfalls and massive glaciers including the huge Jostedal Glacier which helped carve the Storfjord and still is the source of much of the water that was almost everywhere as we traveled.

On this day before Midsummer, we would even pass through a summer downhill skiing station.

Norway—and especially the central fjords and glaciers—is the land of the trolls. Speaking for myself, I could not see them, although our guide tried his best to convince us that they were all around. 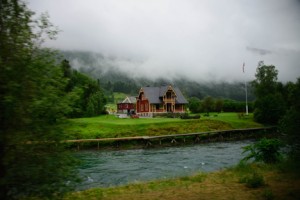 A Royal summer house in Stryn. The King was expected later in the day, but we had to leave our regrets

We saw mostly fog and mist; for all we knew, we were indeed surrounded by trolls. These fearsome but ultimately rather slow creatures are said to be thick in these mountains. Why are there troll stories? My best explanation is this: in the cold and dark winters up here near the Arctic Circle, momma and grandma had a lot of time on their hands to entertain—or frighten—the kids. And the landscape is so rocky and craggy. The stories they created brought the rocks and waterfalls to life.

At Stryn we saw a sudden glimpse of pink. Pink tractors to be precise. This town up in the mountains above the fjord was the birthplace of what is now an international retail fashion empire: Moods of Norway. Two locals founded the company there and it has now spread through Scandinavia, Europe, and to the United States. I believe they employ trolls in their knitting factories.

Jostedal Glacier still is huge, but the snows of yesterday seem to have gone away. At the Stryn Summer Ski area, thirty years ago a typical winter would bring as much as 19 meters or 60 feet of snow to the base. This past winter: only about half a meter, or 20 inches fell. 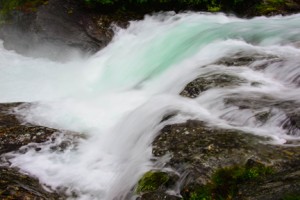 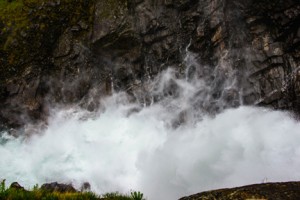 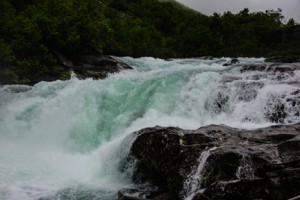 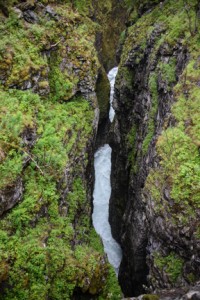 When we stopped at the ski hill, we saw skiers loading onto the bottommost chairlift from a field that was mostly mud. There were two more chairlifts to take, far above us and hidden in the clouds, before skiers could make runs on the snow above the glacier.

I wish we had time to make a few runs; my knees were aching in anticipation. But we pressed on. 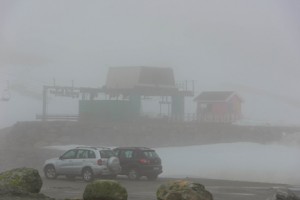 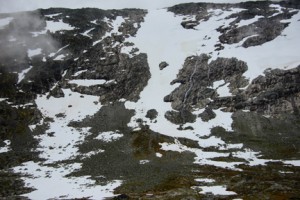 We arrived in Grotli, near the end of a long valley that runs hundreds of miles up the spine of Norway. And there we found, crunched against a snowbank, a reminder of the odd events that happen in war.

On April 27, 1940, a German Luftwaffe medium bomber (a Heinkel He 111) was shot down near Grotli by an RAF Fleet Air Arm Blackburn Skua fighter (a carrier-based dive bomber.)

The German plane made a crash landing near where it still stands.

The British plane also fell to earth, landing in the cold water of Breidalsvatnet Lake.

Both pilots somehow survived, and once on land began shooting at each other with sidearms. But they also needed to find a way to survive the harsh conditions and they ended up sharing the same mountain cabin in what began as a tense standoff but ended up as an unlikely friendship that continued after the war.

If all this sounds like the plot of a movie, well you’re right. The 2012 film, “Into the White” was based on the true story and partly made at Grotli. 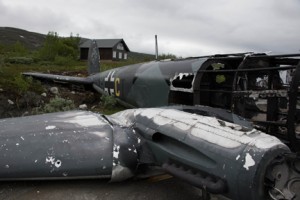 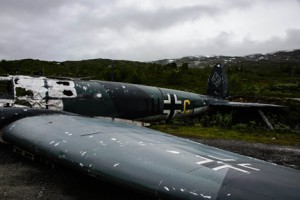 After Grotli, we rose up on the Dalsnibba Road to the actual Roof of Norway, or at least the highest point of Norway that can be reached on a tourist motor coach. The Dalsnibba Road is an unpaved, vertiginous set of switchbacks with no guardrails.

Our driver deftly navigated the bus up the road, we reached 1,500 feet above fjord and sea level where there was an observation platform with a spectacular view of Geirangerfjord below and the glaciers all around. Except of course, on a day like we were experiencing.

“Welcome to the Roof of Norway,” our guide announced, “where we can see absolutely nothing.”

That was not technically true. All around we could see trolls…or at least rocks that look a bit like trolls. The legend says that trolls live below bridges, emerging only to collect tolls from passersby. Or to eat them if they are not paid or if there are bad little girls or boys in the vicinity.

The other thing we saw were thousands upon thousands of rock piles. They look sorta-kinda like the Inukshuks of the Inuit and other Arctic tribes. Inukshuks are erected to mark pathways or hunting grounds; the word means “something that acts as if it were a person.”

But the rock piles in Norway have nothing to do with Norwegian culture, I was told. Instead they have all been created by tourists passing through. “I have been here,” they say. The Norwegians just shrug. 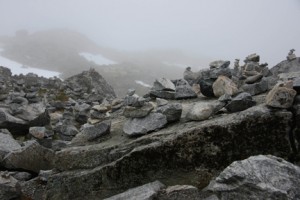 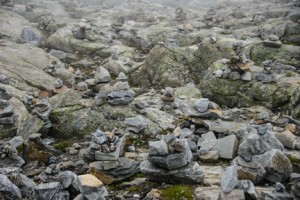 And then we carefully descended on the Geiranger Road, one of the engineering wonders of the 19th century. It was completed in 1889, after 11 years of construction. (The workers could only dig in the short summer.) It has 78 curves in 20 kilometers or 12.5 miles, including 22 bends of 180 degrees.

When we finally descended to near the level of the fjord, we caught a glimpse of Silver Cloud, which had gone on ahead of us to put down an anchor in Geirangerfjord. We took the tender back to the ship, and back into the crystal-clear world of high luxury. Champagne and lobster, thank you very much. No trolls aboard. 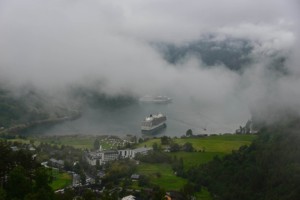 All photos Copyright 2013 Corey Sandler. To obtain a copy, please visit the Order a Photo tab.