A bit less than 3,000 residents, most of them holding full British citizenship.

About 600,000 sheep, and many thousands of Gentoo, Magellanic, and King penguins.

And scarcely a tree to hide behind. 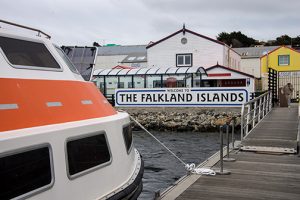 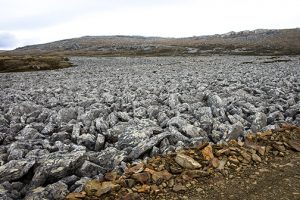 For this trophy, a significant naval, air, and ground war was fought in 1982 after Argentina gambled–incorrectly–that it could reassert its claim to the specks of land off its eastern shore and more than 8,000 miles or 13,000 kilometers from its current claimant, the United Kingdom. 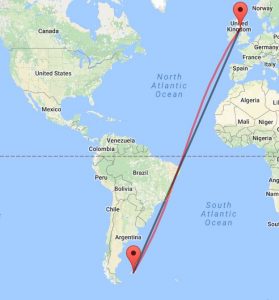 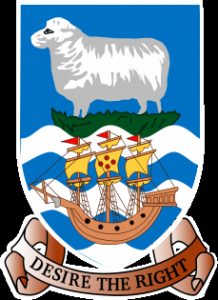 The British backed up their claim to the Falklands, though at a loss of blood and treasure. The Argentines failed to regain what they call Las Malvinas although they still bang the drums from time to time. 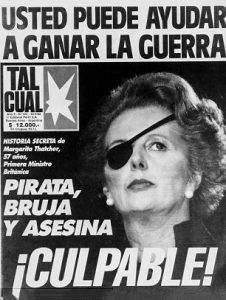 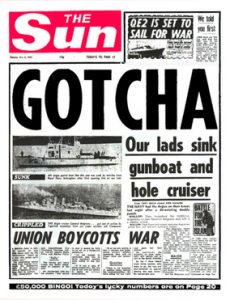 It is worth noting, though, that our ship is sailing from Ushuaia, Argentina to the Falklands/Malvinas and will depart from there to Buenos Aires, Argentina by way of Montevideo, Uruguay.

It’s a demonstration of Peace Through Tourism. (There’s a corollary put forth by writer Thomas Friedman, called the McDonald’s Theory that says that no two countries that each have a McDonald’s have ever gone to war. The theory is not perfect, and The Falklands does not have a branch of the Golden Arches, but the point remains: a healthy trade in tourist dollars generally soothes the savage breast.)

So whose islands are they, anyway?

The English made the first known landing in 1690. France established a colony in 1764 but quickly departed.

In 1765, the British returned and claimed the islands. Five years later, a Spanish commander arrived from Argentina with five ships and 1,400 soldiers and forced the British to leave.

Britain and Spain almost went to war, but Britain decided it had other more important issues, like the pesky uprising in the American Colonies.

Spain administered the island from Montevideo, Uruguay until 1811 when it became distracted by the Peninsular War back home, part of the Napoleonic Wars.

In 1833, the British returned to the Falkland Islands, acting like they never had left.

The invasion by the Argentines in 1982 was the result of a wobbly grasp on power by a military junta. wobbled in power back home, Argentina invaded the islands they call Las Malvinas. They lost.

Arcos Dorados is McDonald’s largest restaurant operator in Latin America and the Caribbean and its largest franchisee in the world. And they operate the Arcos Dorados (the Golden Arches) in Argentina. They opened their first McDonald’s in Argentina in 1986, four years after the war.

There’s no McDonald’s in the Falkland Islands. But many back home in the United Kingdom.

A VISIT TO BLUFF COVE

I went with guests today to Bluff Cove, a windswept beach and lagoon that is home to several hundred locals: Gentoo and King penguins, mostly.

It was obviously a formal day on the island, since they all were decked out in tuxedos. 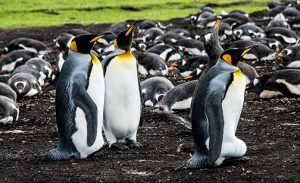 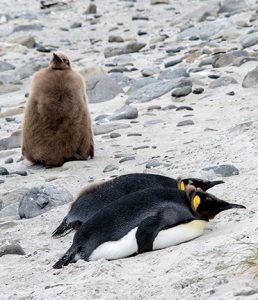 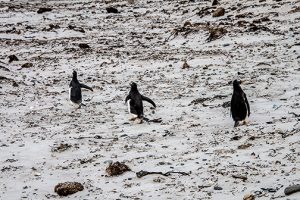 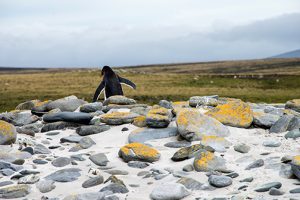 We are off this afternoon for two days at sea, headed to Montevideo, Uruguay and then on to Buenos Aires, Argentina.