Cardiff is in the southwest of Wales, a bit closer to England than Holyhead in both geography and culture.

If London is New York, then Wales is the American midwest.

The tourism bureau would have us believe Cardiff has the largest concentration of castles of any city in the world, a claim I cannot easily verify.

In addition to Cardiff Castle, there are numerous other grand homes scattered about.

Until the Roman conquest of Britain, Cardiff was part of the territory of the Silures, a Celtic British tribe that flourished in the Iron Age.

The Romans built a 3.2-hectare (8-acre) fort established by the Romans near the mouth of the River Taff in 75 AD (four years before the eruption of Vesuvius on the Italian peninsula.)

In 1081 William I, King of England, began work on the castle keep within the walls of the old Roman fort.

Cardiff Castle has been at the heart of the city ever since. The castle was substantially altered and extended during the Victorian era. Small portions of the original Roman work can still be distinguished in the wall facings.

I spent the day exploring the apartments built within the castle in the 18th and 19th century by the Bute family, which amassed a huge fortune in the coal export business.

The most spectacular enhancements were made by the third Marquess of Bute, John Crichton-Stuart.

Here is some of what I saw: 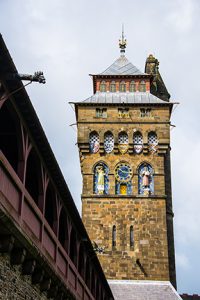 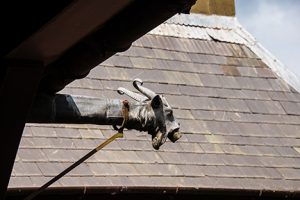 A wondrous goat of a downspout at the castle 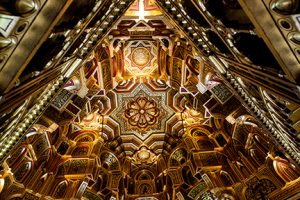 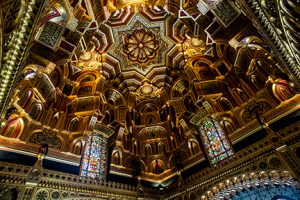 The spectacular Arab Room in the living quarters 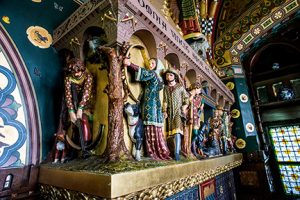 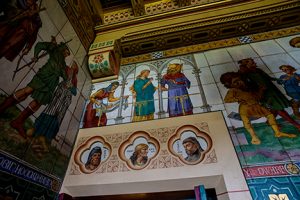 The children’s room, decorated with great tales and portraits (left to right) of Aesop, Sheherazade, and Chaucer. 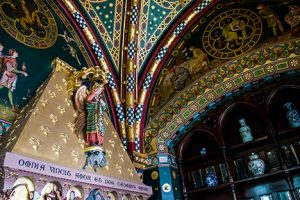 The gentlemen’s smoking room, with a nod to the ladies: the inscription reads in Latin: “Love Conquers All, and We All Surrender to Love.” 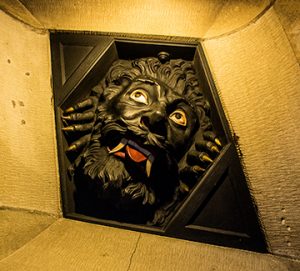 But outside the gentlemen’s smoking room, a depiction of Typhon, the most awful of Greek monsters, intended perhaps to keep women away 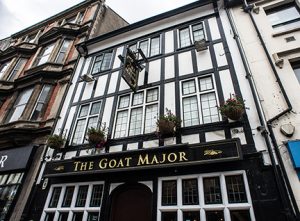 Outside in Cardiff, a pub named after the officer keeper of the mascot of the Royal Welsh Regiment. The Goat Major tends to the needs of the goat, who has his own title, rank, and salary 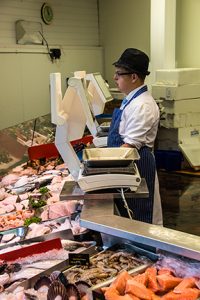 A fishmonger at the Central Market 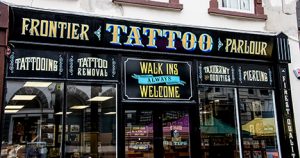 And finally, a one-stop shop where you can get a tattoo, have it removed, or give yourself over to taxidermy

All photos copyright 2017 by Corey Sandler, all rights reserved

One of the most striking modern structures in Cardiff is the Millennium Centre, home to the Welsh National Opera, the BBC National Orchestra of Wales, and the Cardiff Bay Visitor Centre.

The finished building by architect Jonathan Adams was meant to express “Welshness.” Its construction uses local metal, wood, and glass, and 1,350 tons of local slate in purple, blue, green, gray, and black colors.

Inscribed on the front of the dome, above the main entrance, are two poetic lines, written by Welsh poet Gwyneth Lewis in Welsh and English.

IN THESE STONES
HORIZONS
SING

Which somehow brings us to Doctor Who, which I’m sure means quite a lot to many of you and nothing whatsoever to others.

The Doctor, from a race called the Time Lords whose home planet is Gallifrey, travels through time and space in his ship the TARDIS (an acronym for Time and Relative Dimensions In Space) with various companions.

From time to time he regenerates into a new form (which is how the show has been running since 1963).

The show, in its current form, is produced and filmed by BBC Wales.

His time-traveling space ship, the Tardis, appears from the exterior to be a blue British police box, which was a common sight in Britain in 1963 when the series first aired. Not so much anymore.

Much of the series is filmed in and around Cardiff—not because of a particular Welsh reason, but as a stand-in for London and other places.