We arrived early this morning at the port of Callao, Peru’s principal outlet to the sea, about ten miles from the capital city of Lima.

Lima is the third-largest city of the Americas: São Paulo in Brazil has about 12 million inhabitants, and then Mexico City just barely edges into second place with about 9 million residents. Lima counts 8.9 million in its sprawling city, and millions more in the surrounding urban sprawl.

I’ve been to Lima a number of times and have enjoyed strolling its Plaza de Armas with a handsome collection of Spanish Colonial structures.

Today, though, I went with a group of guests for an unusual inside view of one of the most impressive private museum collections in the world: the Larco Herrera Museum.

Rafael Larco Herrera, from a wealthy family with sugar cane holdings, devoted much of his life to collecting artifacts from the rich prehistory of Peru. By some estimates, there are about 87 different known tribes and peoples who inhabited the west coast of South America in and around what is now Peru.

Larco’s collection, amassed between about 1925 and 1966, is astounding, with thousands of objects on display. But the real thrill for me was to get a glimpse of the museum’s storage closet, home to perhaps another 50,000 more pieces of pottery, jewelry and other adornment, and textiles. We were led through the collection by one of the curators.

I performed no looting, taking home only memories and photos. Here are a few:

The Garden of Earthly Delights and Monsters

Almost every piece on the shelves of the storage area of the Larco Herrera would be a treasure at another museum.

All content by Corey Sandler, all rights reserved 2019. If you would like a print of any photo, please contact me using the links on this blog.

We flew south all through the night from New York to Santiago, Chile. We left the wintry East Coast of the United States and landed in summery South America.

Viking’s Viking Sun will spend the next 28 days heading northwest and then north, calling at ports in Chile, Peru, Ecuador, Panama, Costa Rica, Guatemala, Mexico, and then San Diego and Los Angeles in the United States.

This is just one month in a record-setting eight-month-long World Cruise. We will cross the Equator as we sail along the appropriately named nation of Ecuador. In fact, across the eight months of this cruise, this ship will cross the Equator four times heading south then north then south then north again. A hearty few dozen guests will be aboard for the entire journey, while others will partake of various segments.

I’ll be posting photos and comments here throughout this cruise. I hope you’ll join me here.

Here’s the answer to a question for team trivia: residents of the major Peruvian port of Callao are known as chalacos.

The city was founded by the Spanish in 1537, just two years after Lima. It soon became the main port for Spanish commerce in the Pacific.

At the height of the Viceroyalty, virtually all goods produced or plundered in Peru, Bolivia, and Argentina were carried over the Andes by mule to Callao.

From there the cargo was shipped to Panama. It was nearly four centuries too early for a passage through the canal, so a land route was used instead.

Cargo was carried overland across the isthmus, and then loaded onto galleons to be transported to Spain. The Spanish maintained strongholds in Cuba and in Cartagena in what is now Colombia. 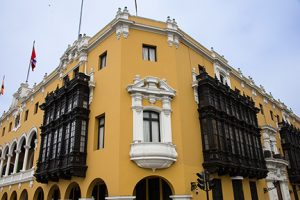 Today I went with a group of guests on a tour concentrating on the Spanish  Colonial history of Lima.

Our first stop was at the amazing Casa Aliaga, a home which has been in the hands of the Aliaga family for more than 17 generations from 1535 through today. It is furnished with items including some dating back to the times of the Viceroyalty of Peru. 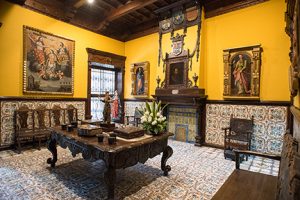 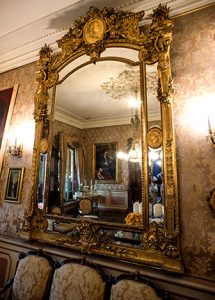 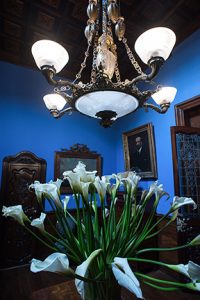 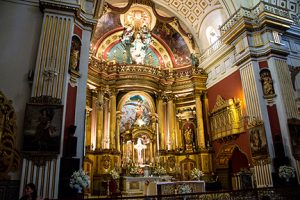 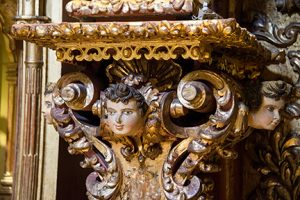 Nearby was Presidential Palace of Peru, guarded by a squad of ramrod straight soldiers: 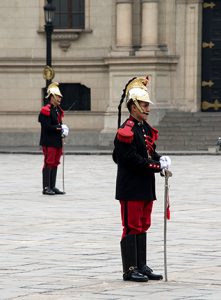 And then we visited a small portion of the sprawling San Marco University, the oldest university in the Americas, dating from 1551. We were greeted by several actors in period dress, including a young woman who showed the connection between Peru and Colonial Spain and the Moorish influence in Andalusia.

And she did so in a very coy way. 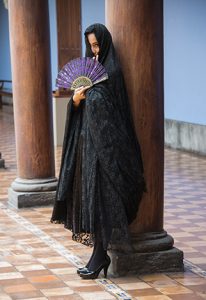 Norwegian explorer and author Thor Heyerdahl believed that people from South American could have settled Polynesia in pre-Columbian times.

Norwegian explorer and author Thor Heyerdahl believed that people from South American could have settled Polynesia in pre-Columbian times.

In 1947, it was from Callao that Norwegian explorer and author Thor Heyerdahl set sail in his balsa wood raft Kon Tiki, on a successful voyage to Polynesia to support his theaoty that people from South American could have settled Polynesia in pre-Columbian times.

Today that theory is subject to some questioning, but no one questions the seamanship and bravery of Heyerdahl and his crew.

Lima, the capital and the largest city of Peru, lies about 9 miles or 15 kilometers to the south.

With a population of almost 10 million, Lima is the second-largest city in the Americas, behind São Paulo and before Mexico City.

That puts about one-third of the entire nation’s population in and around Lima, a handsome and bustling city that brings together things colonial and modern.

UP TO MACHU PICCHU

Up in the interior of Peru, along a magnificent mountain pass from the city of Cusco, lies the mystical city of Machu Picchu. You cannot sail there by cruise ship (or any other waterway).

Some of our guests headed there on an extended land excursion. Here is some of what I saw when last we made a pilgrimage there: