Welcome aboard. I am happy to share some of my photographs taken aboard Viking Sky on our journey from Miami to the Panama Canal and back.

SATURDAY, JANUARY 13, 2018: Along the Tortuguero near Puerto Limón, Costa Rica

We arrived early this morning at Colón, Panama on the Atlantic Ocean and spent the afternoon in Panama City on the Pacific. Although I have made the transit of the isthmus more times than I can remember, this was the first time I did so by rail.

The Panama Canal Railway was begun in 1850 and completed in 1855 as the first mass transit across the isthmus of Panama, replacing the very difficult trails through the jungle. And then the railway became an essential part of the construction of the Panama Canal itself, when work was begun first by the French in 1881 and then redone and completed by the Americans in 1914

The American effort required the rebuilding and relocating of some of the track because the American design was based on damming the Chagres River and creating a manmade lake as the means of transit between the seas. The track today includes some of its 1850 route and some of the 1914 relocated path which parallels the Panama  Canal.

Today the railway serves mostly as a “dry canal”, carrying freight from the Atlantic to the Pacific in containers mounted on flatbed train cars, but it also runs a few passenger trips for tourists each day.

We arrived early this morning at the Gatun Locks of the Panama Canal and then rose up three locks to Gatun Lake, which today was at its maximum level of 86.7 feet above sea level.

Once we reached the lake, we made a U-turn and then made our way back down to the Atlantic Ocean. In modern cruising language, this is known as a “partial transit”, which sounds like an oxymoron to me.

I have been through the Panama Canal more times than I can remember, and it is always a thrill. I spent the day up on the navigational bridge offering commentary about our partial transit. Call it an up and down excursion…

Cartagena in Colombia is one of the best preserved old Spanish colonial cities in the new world.

We had a lovely day in Cartagena, although we were not alone: four cruise ships in port, thousands of tourists in the streets, and painful traffic jams.

The best time to visit: after hours, when the vendors and the selfie-sticks have gone home.

So, we weren’t supposed to be here in Nassau, Bahamas this morning. But a combination of bad weather and other factors in the Western Caribbean caused us to cancel calls scheduled for Montego Bay, Jamaica and then George Town on Grand Cayman Island.

We sailed two days eastward along the south side of Cuba and then turned north toward Nassau for a final port of call.

Nassau is an interesting place, mostly because of its history as a British colony somewhat similar to Bermuda and the Turks and Caicos. It was a place of plantations (and therefore slaves), and its success drew in pirates and privateers and attacks by the Spanish who contested some of the same waters.

Today, the English are still here with a Royal Governor and the police force look more like British Bobbies than the ones in London. The Spanish and the pirates are gone, and in their place hordes of tourists. Many of them arrive by cruise ship at the huge port which can accommodate five and sometimes more large ships.

One of our favorite places to visit is Christ Church Cathedral, an Anglican/Episcopal church at the corner of King and George streets. The structure is handsome, with the current building dating from 1841 on a base that dates back to the mid-1600s.

But it is the collection of plaques and other remembrances that line the walls of the church that fascinate. Any one of them could generate a novel, or at least a lecture for me.

A bit of old Nassau, hidden in plain sight

Safe travels to all.

Belize is a 35-year-old nation that strives for economic and political stability; it still has a way to go.

It’s a hot place, but you’ve got to love a people who chose as their national motto: “Sub Umbra Floreo”.

“Under the shade I flourish.”

Belize is not quite as advanced in tourist infrastructure as Costa Rica—few places in this part of the world are—but that seems to be its goal.

And Belize has the added attraction of several significant Mayan sites and some spectacular offshore reefs.

One is the Classic Mayan political center of Lamanai, a word in Yucatec Mayan meaning “submerged crocodile.”

Lamanai has only been explored in the last 40 or so years, and it is still mostly covered and rather difficult to get to. It was occupied as early as the 16th century BC, and continued to be used up to the 17th century of the modern era.

How difficult? Our ship had to put down its anchor about a mile offshore to avoid damaging the spectacular offshore barrier reef (second only to the reef in Australia in size).

So,  my trip to Lamanai (ancient Mayan for submerged crocodile) began with a long tender ride to shore. Then a 90-minute drive in a superannuated bus on a minimal road to the headwaters of the New River. 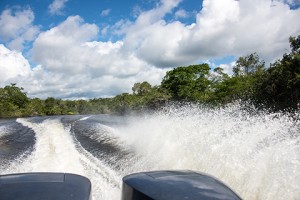 From there by open speedboat another 90 minutes into the deep jungle.

The good news: Lamanai was worth all the effort, and we had the place almost to our own,  along with the bold and loud howler monkeys. 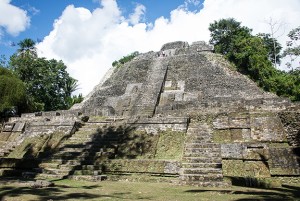 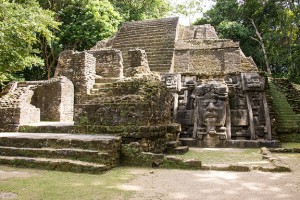 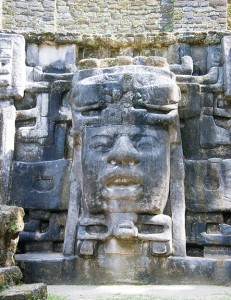 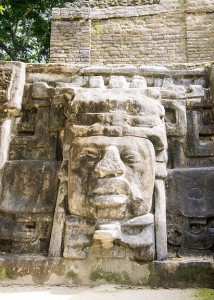 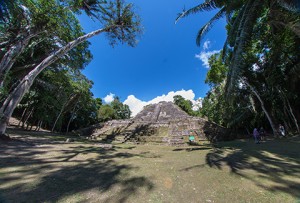 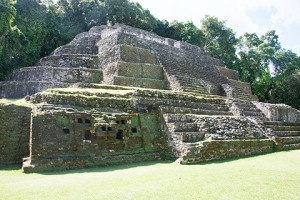 During the Spanish conquest of Yucatán, Spanish friars established two Roman Catholic churches here, but a Mayan revolt drove them out. When the British settled in Lamanai, they installed a sugar mill at the site.

Archaeological work has concentrated on the larger structures, most notably the Temple of the Masks, the Jaguar Temple, and High Temple.

A significant portion of the site remains under grassy earth or is covered in dense jungle growth.