Alanya is today a beach resort city on what some call the Turkish Riviera, with about 250,000 people in the region.

We arrived at dawn to a beautiful morning. Clouds and rain storms followed, but somehow we managed to avoid them as we explored the region. 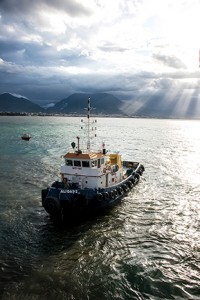 Coming in to Alanya.

The city is on a small peninsula that juts out into the Mediterranean Sea below the Taurus Mountains. Because of that defensible location, Alanya has served as a fortress or stronghold for many peoples, including Ptolemaic, Seleucid, Roman, Byzantine, and Ottoman Empires.

Finds in the nearby Karain Cave indicate occupation during the Paleolithic era as far back as 20,000 BC, and archeological evidence shows a port existed at Syedra, south of the modern city, during the Bronze Age around 3,000 BC.

The Roman Republic fought local Cilician pirates in 102 BC. After the fall of the Roman Empire, the city remained under Byzantine influence. 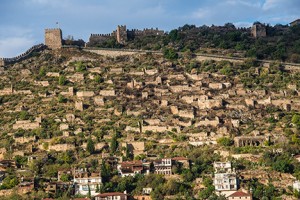 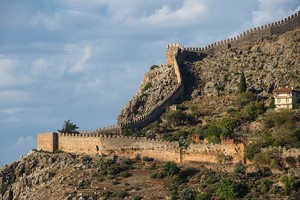 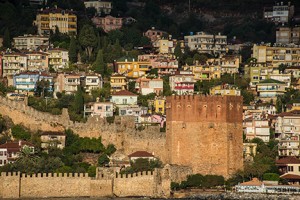 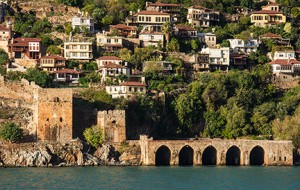 The Seljuk fortifications and an Ottoman-era dockyard are still in place in the harbor of Alanya. Photos by Corey Sandler

Islam arrived in the 7th century with Arab raids, which led to the construction of new fortifications and periods of back-and-forth between Byzantine and Seljuk control. The Seljuks renamed the city Alaiye, a derivative of Sultan Alaeddin Kayqubad I’s name.

Fast-forward to 1935 when Turkish ruler Mustafa Kemal Atatürk came for a visit.

As part of Ataturk’s modernization of Turkey, he decreed a change from Arabic and old Turkish alphabets and adopted the Latin script. According to legend, a mistake in a telegram to Ataturk resulted in changing Alaiye to Alanya, and that is the name we have today.

Local cuisine is built around seafood, including sea bass, red mullet, and other fish.

The Kızıl Kule or Red Tower stands at the harbor below the castle. The last of Alanya Castle’s 83 towers, it was built to protected the Tersane (dockyard), one of the finest examples of medieval military architecture still in existence. Built by the Seljuk Turks in 1221, the dockyard has five vaulted bays.

About 90 minutes away from Alanya are the impressive remains of two great Greco-Roman cities: Aspendos and Side (pronounced SEE-deh).

The theatre at Aspendos is one of the larger nearly intact buildings of two millennia ago. 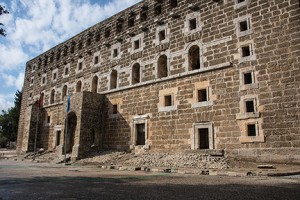 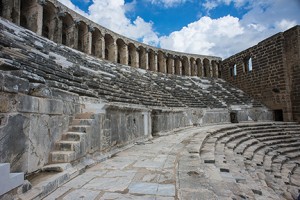 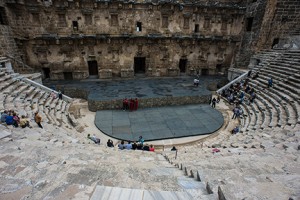 And the theatre at Side overlooks the remains of a once-great seaside city. 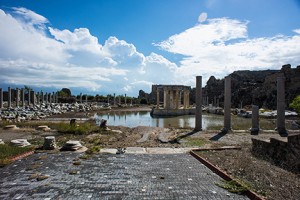 All photos by Corey Sandler, all rights reserved. If you would like to purchase a high-resolution copy of an image, please contact me.