Crete is the largest Greek island, at the southern edge of the Aegean Sea.

In ancient times, from about 2000 BC to 1500 BC, it was the center of the great Minoan civilization, home of the Palace of Knossos which influenced places as far away as Spain and the Middle East, with outposts in places like the Greek island of Santorini.

Around 1500 BC, the Minoan civilization centered on Crete collapsed.

Santorini blew its top: one of the largest volcanic explosions in the history of the planet.

In addition to destroying most of the island of Thera or Santorini, the explosion rose up a tsunami that moved about 90 miles across the Aegean sea to reach Crete.

Agios Nikolaos is Greek for Saint Nicholas. Nicholas is the patron saint of those who sail at sea, which I suppose includes us.

(In some places, he is also the patron saint of merchants…and thieves. Which I suppose says something about something.)

Actually, there’s a connection. Nikolaos was a fourth-century Bishop in Myra which was part of Greece but now part of Turkey. He had a reputation for secret gift-giving, such as putting coins in shoes. Saint Nicholas became the model for Santa Claus, with his modern name coming out of the Dutch version, Sinterklaas.

Agios Nikolaos was settled in the late Bronze Age by Dorian Greeks. 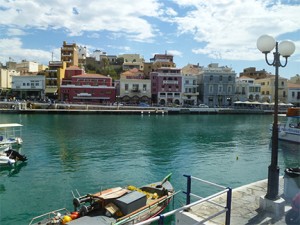 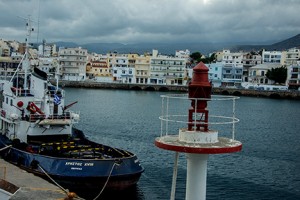 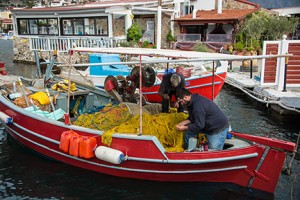 The inner harbor at Agios Nikolaos and scenes around the island. Photos by Corey Sandler

The island of Spinalonga, officially known as Kalydon, is about 11 kilometers or 7 miles north of Agios Nikolaos.

Spinalonga was not always an island. During Venetian occupation in the 15th century the island was carved out of the coast for defense purposes and a fort was built there to fend off Arab pirate attacks that intensified after the fall of Constantinople.

What is it about Venetians and canals?

The Venetians were said to be unable to understand the Greek name for the town, stin Elounda (meaning “to Elounda”) and so they came up with their own version: spina lunga, meaning long thorn. They were borrowing from the name of an island with that name near Venice called Spinalunga; today it is believed to be the island of Giudecca. 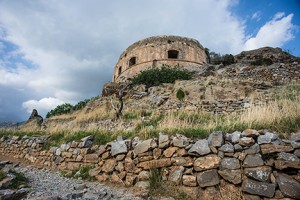 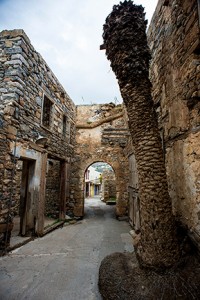 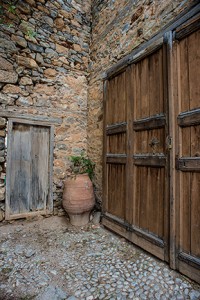 Spinalonga remained in Venetian hands even after the rest of Crete fell to the Ottomans in the Cretan War of 1645 to 1669. These three forts defended Venetian trade routes and were later used by Christians escaping persecution from the Ottoman Turks.

The Venetians held on to the small territories on Crete until 1715, when the Ottomans finally prevailed. Although they lost control of the island in the 1860s, a small community of Turks remained on the island until 1903.

The island was subsequently used as a leper colony from 1903 to 1957, one of the last active leper colonies in Europe. The lepers’ entrance was a tunnel known as “Dante’s Gate”, because the patients did not know what was going to happen to them once they arrived.

The facilities were apparently decent, a great improvement over living in caves, which had been the lot of lepers before the colony was opened. Today, the island is unoccupied.

The Monastery of Kera Kardiotissa is northwest of Agios Nikolaos, in the direction of Heraklion. It is believed the monastery was built in connection with what was said to be a 9th century icon of Panagia, the Virgin Mary.

According to the tradition, during the iconoclastic era when works like this were being deliberately destroyed, this particular icon was moved to Constantinople. Somehow, though, it returned to Crete: a miracle, or at least a mystery.

Then, during the period of the Venetian rule, the icon was stolen from a wine merchant and taken to Italy, where it is now at the Church of San Alfonso in Rome.

The beautiful little stone church has been expanded and elaborated over the years; 14th century frescoes only hint at their one-time magnificence. Today Kera has changed from a monastery to a nunnery.

The surrounding region of Lassithi is one of the more beautiful places in the Aegean, and home to the remains of a number of ancient towns and slowly decaying fields of windmills. 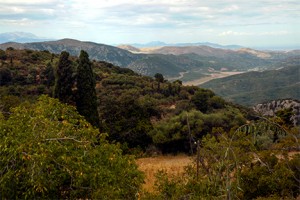 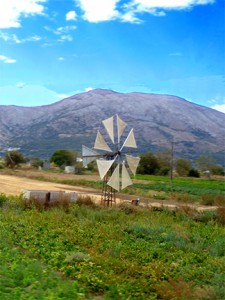 Up on the Lassithi Plateau of Crete. Photos by Corey Sandler

But for some the most intriguing site of Crete is the ancient ruins of Knossos near Heraklion.

Knossos—the Labyrinth—is the largest Bronze Age archaeological site on Crete. The ancient Minoans are believed to have built the palace of Knossos about 2000 BC.

The site has been partly restored and rebuilt—we’re not sure how accurately.

The palace appears as a maze of workrooms, living spaces, and store rooms close to a central square. Some of the walls bear detailed images of ancient life. 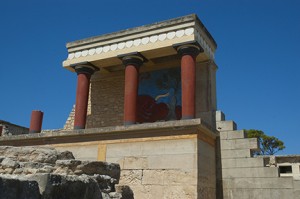 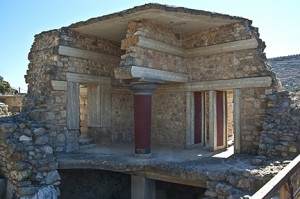 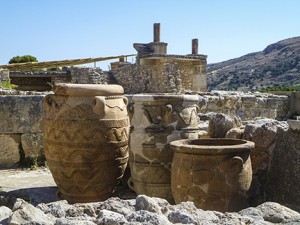 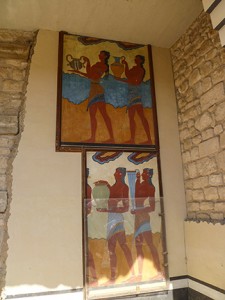 The Palace of Knossos. Photos by Corey Sandler

The site was substantially restored by archaeologist Arthur Evans, an English gentleman of independent means who purchased the site about 1900. Some of the wall paintings and some of the restoration was entirely of Evans’ creation without historical evidence, at least according to some modern archeologists.

What we do know is that Knossos was an intricate collection of more than a thousand interlocking rooms, some of which served as artisans’ workrooms and food processing centers.

The site has had a very long history of human habitation, beginning with the founding of the first Neolithic settlement about 7000 BC.

All photos by Corey Sandler. All rights reserved. If you want to purchase a high-resolution image, please contact me.