Here in Bridgetown, one cruise comes to an end and another begins. We are headed south from Barbados to the fragrant island of Grenada and the infamous Devil’s Island before entering into the South American continent and sailing up the Amazon River to the forest city of Manaus. Here’s our plan: 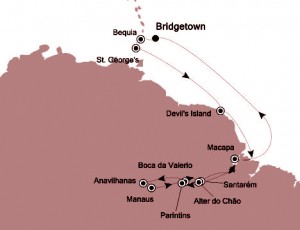 To guests leaving us here in Bridgetown, safe travels. And to new guests, welcome aboard.

Barbados, along with Jamaica, is one of the most English-like islands in the Caribbean.

That stands to reason…since its first permanent settlers arrived from England in 1627 and to some extent never left…although the population today are mostly descendants of African slaves or indentured servants from India.

And so on Barbados they love their cricket and their rum, often combining the both under the Caribbean sun. Sometimes with a break for tea.

About 90 percent of Bajans are of African or mixed descent, with small groups from India, China, Ireland, and the Jewish diaspora.

Here in Barbados, the big party is not Carnival. Instead it is the Crop Over festival, held for most of the month of July into early August. The origins of Crop Over can be traced back to the 1780’s, a time when Barbados was the world’s largest producer of sugar.

Nearly everyone gets into the parade or the musical performances, colorfully dressed (or barely dressed) for the occasion.

In recent years, a guest at Crop Over is a hometown girl who made good: the pop singer Rihanna. She was born in Saint Michael, Barbados in 1988, which means that most of us have shoes older than she is.

Rihanna grew up in a three-bedroom bungalow in Bridgetown and sold clothes with her father in a stall on the street. Forbes estimated her 2012 earnings at about $53 million, which would be about $106 million Barbadian dollars, in a place where the per capita income is about $16,000.

Good for her, I suppose. To her credit, at least some of those tens of millions of dollars have made their way back home.