Londonderry is the second-largest city in Northern Ireland, home to about 93,000; well behind the 483,000 in the capital city of Belfast.

The name Derry is an anglicisation of the Irish name Daire or Doire meaning “oak grove”.

In 1613, the city was granted a Royal Charter by King James I and as a reflection of the funding it received from the London guilds, it added London to Derry in its name.

But like many, many things in this part of the world it depends on who you are talking to.

In general, Nationalists—those who would prefer a unified Ireland bringing together Northern Ireland and the Republic of Ireland and who are predominantly Roman Catholic—drop the “London” and call the city “Derry.”

Many Unionists—those who want to maintain Northern Ireland as a part of the United Kingdom and who are predominantly but not exclusively Protestant—subtly, or not-so-subtly, keep the link to the UK out front by calling the place “Londonderry.”

A local broadcaster tried to popularize the nickname of Stroke City as in Derry-Stroke-Londonderry.

An older nickname is the Maiden City, a nod to the fact that its old walls were never breached in three separate sieges in the 17th century, including the Siege of Derry of 1688 to 1689.

The Siege of Derry was the first major event in the Williamite War in Ireland, also called in Irish the War of the Two Kings.

The siege is commemorated yearly in August by the Apprentice Boys of Derry, a Protestant fraternal society, founded in 1814.

During the troubles, marches by the Apprentice Boys were often the flashpoint for violent opposition by the city’s Irish nationalist majority.

The parades still take place, but in recent years most of the Troubles are more like well-rehearsed Kabuki theater. Let us hope they remain that way, or go away completely.

These days Derry or Londonderry is mostly peaceful, with conflict moved into the political realm. The British election is scheduled for less than a week from now, and Sinn Fein is now a recognized political party 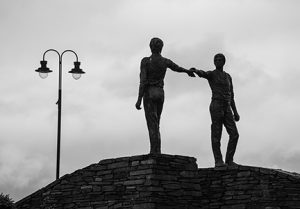 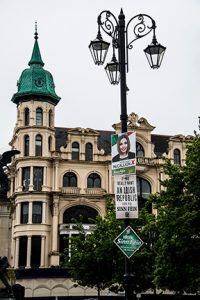 Today we went for a walk within the walls of the old city to visit the Guildhall, paid for, constructed, and decorated by the London Guilds who aimed to make Derry British…and who added London as a prefix to its name. Here are some of the stunning glass windows of the Main Hall: 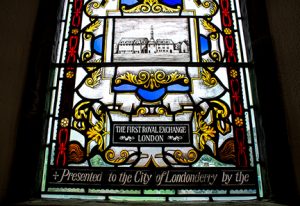 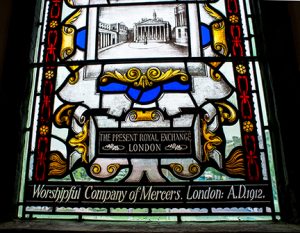 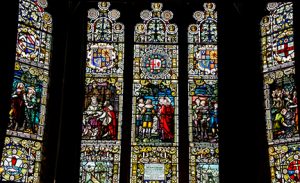 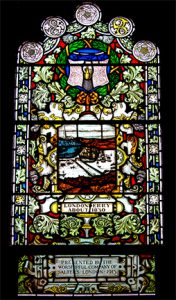 From the Guildhall we exited the old city walls and walked a short distance to Bogside, a mostly Catholic area that was involved in many of the major events of The Troubles, including Bloody Sunday. 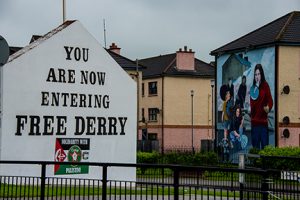 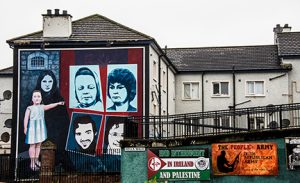 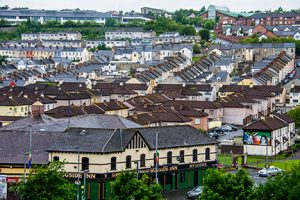