From our ship, the city of San Juan is at our feet.

But Puerto Rico, the Rich Port, is so much more than just that handsome Old Spanish city.

Puerto Rico is one of the gems of the Caribbean, a green and mountainous island with handsome beaches and a tropical rainforest, a now-cosmopolitan capital city with one of the most impressive fortresses of the new world, several other significant cities each with its own allure, and a vibrant culture of music, literature, and food. 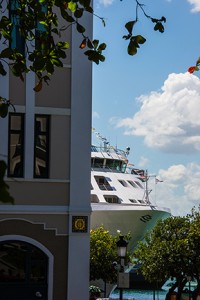 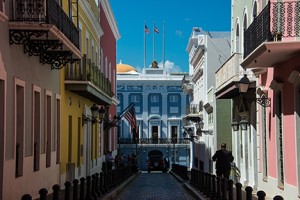 Puerto Ricans sometimes call the island Borinquen, a version of Borikén, its indigenous Taíno name, which means “Land of the Valiant Lord”.

And if you want to venture into the realm of hyperbole and tourism, the island is also popularly known in Spanish as la isla del encanto, meaning “the island of enchantment.”

The most dominant structure in San Juan is Morro Castle, El Castillo San Felipe del Morro. This citadel was begun in 1539 on orders of King Charles V of Spain. 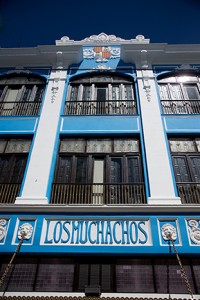 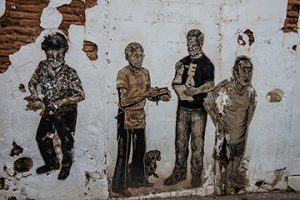 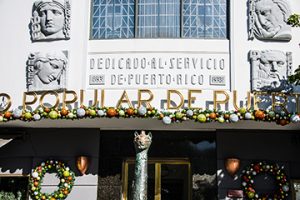 The first part of its name comes, Felipe, comes from King Philip II of Spain. The second half, el Morro, means the “nose”, or in this context, ‘the promontory.’

The fort was designed to guard the entrance to the San Juan Bay, and defend the colonial port city of San Juan from seaborne enemies.

Flagpoles on El Morro today customarily fly the United States flag, the Puerto Rican flag and las Aspas de Borgoña, the Cross of Burgundy Flag, a standard which was widely used by Spanish armies around the world from 1506 to 1785.

And although Puerto Ricans can vote in Presidential primaries of American political parties, they do not have the right to vote for candidates in the presidential election itself.

They do not have full representation in the U.S. Congress: they elect a delegate who can participate in committees but does not have a vote on the floor of the House of Representatives. All of this is very much on the minds of Puerto Ricans today as they face serious economic issues without the full ability to deal with them by themselves.