The Corinth Canal is the strange passage between the seas, one of the most interesting and challenging little canals in the world.

It connects the Gulf of Corinth in the Ionian Sea to the Saronic Gulf in the Aegean Sea, a straight four-mile (six-kilometer) line across the top of Peloponnesia in Greece.

It’s an obvious place for a canal, since it cuts off 185 nautical miles (213 statute miles) or 343 kilometers of sailing between the Aegean and Adriatic.

Not having to go down and around the bottom of Peloppenesia saves almost a full day for a sailing vessel or about half a day for a ship like ours.

The idea of having a canal here was so obvious that it was pursued way before modern times. The first serious consideration of a canal cutting across the Isthmus of Corinth was in 602 BC, when Periander, the Tyrant of Corinth and one of the Seven Sages of Antiquity proposed it as a public works project.

But he was not sage enough to figure out how to dig the ditch.

In 66 A.D., the Emperor Nero sent war prisoners from the Aegean islands and six thousand Jewish slaves to work on the canal. Nero himself started the work, digging with a golden hoe, while music played.

Nero’s slaves dug a ditch three kilometers or two miles in length and 40 meters or 131 feet wide before Nero had to rush back to Rome to quell the Galva mutiny.

In Rome, Nero was arrested on charges of treason and sentenced to death in 68 A.D. That unfinished canal was never used.

The 19th century, the Industrial Age, was the also the Age of the Canal. The modern pathway, begun in 1881, follows—almost to the inch—Nero’s plans. The Corinth Canal was completed and opened on July 25, 1893.

The canal was never a huge financial success. It was (and is) too narrow for big ships, too difficult in bad weather or tides, and too prone to landslides.

Earthen or rock cliffs flank both sides, reaching a maximum height of 63 meters or 207 feet above water.

Within that V-shaped cut, the canal is very narrow: 80.7 feet wide (24.6 meters) at sea level. That’s less than two tour buses or coaches in width.

Our ship, Silver Cloud, is just about the widest vessel permitted through the canal.

And we need help: a tug boat at the bow, an experienced local pilot and two spotters, and some white knuckles up on the bridge. 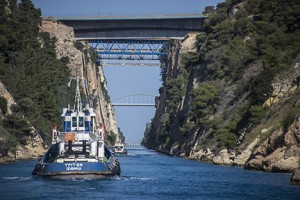 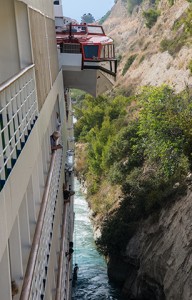