Itea is on the mainland of Greece, at its southern flank on the Gulf of Corinth.

Athens is about 75 miles or 125 kilometers southeast, easily reached by car.

Not so easily by ship.

Before 1893, ships had to go down and around Peloponnesia to get from the Adriatic to the Aegean.

But we have ahead of us this afternoon one of those “tick-the-boxes” treats for world travelers: a passage through the strange, narrow Corinth Canal.

But first, we have a morning in Itea.

There’s not all that much in the port: a few taverns and cafés and a bank. There’s a little beach in town; as is the case most everywhere, the better beaches are away from the harbor.

Pleasant enough, but that’s not the reason we’re here.

Just east of Itea is Kirra, which was the ancient port of Delphi.

And 15 kilometers, or 10 miles northeast are the partly restored ruins of Delphi itself.

The ancient and the modern town of Delphi are on the southwestern section of Mount Parnassus in the valley of Phocis.

It was here that Apollo slew the Python, a dragon who lived there and protected the navel of the Earth.

Yes, there is a place in Delphi the ancients believed to be the belly button of the planet, the Omphalos. 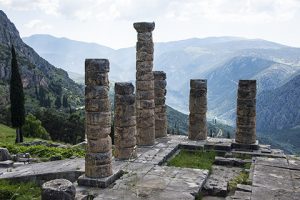 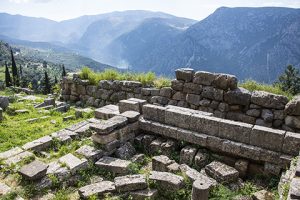 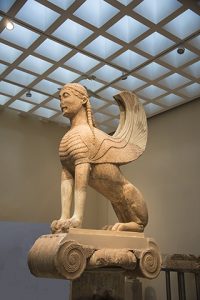 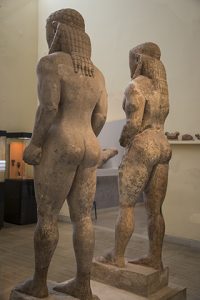 This was also the site of the Oracle of Delphi, the most important of the classical Greek world.

An oracle was a person—or sometimes a group of people—considered to be a source of wise counsel or prophecy.

Oracles were considered portals through which the gods spoke directly to people.

The most important oracles of Greek antiquity were the Sybil or Pythia priestess to Apollo at Delphi, and the oracle of Dione and Zeus at Dodona in Epirus.

In some ways, not too bad a job.

Chosen from among the peasants of the area, she was required to be an older woman of blameless life.

She only gave prophecies the seventh day of each month, seven being the number most associated with Apollo, and only during the nine warmer months of the year.

Hordes of people came to consult with Pythia and her successors.

Some wealthier individuals were said to have tried to jump the line with special offerings. Bribes, you might say.

An acquaintance of mine who is a professor of antiquities in Istanbul described the oracles of ancient Greece as borderline crazies who spoke in tongues.

Actually, he may be on to something.

Observers wrote that the Pythia seemed to be in a trance, speaking gibberish.

She sat on a tripod seat over an opening in the earth.

Vapors rose from a cleft in the rock at the navel of the earth.

According to one version of the story, when Apollo slew Python, its body fell into this fissure, giving rise to the fumes.

Intoxicated by the vapors, the Oracle would fall into a trance, allowing Apollo to possess her spirit.

One line of thinking is that some sort of natural gas—perhaps ethylene or methane or carbon dioxide or even hydrogen sulfide might have been coming from the earth.

That might have been enough to intoxicate the oracle, if not kill her.

And it would have smelled pretty bad.

People consulted the Delphic oracle on everything from personal affairs to important matters of public policy.

The ravings of the Oracle were “translated” by the priests of the temple.

If it sounds like that might be source of some of the campaign planks of some of our current politicians…you just might be on to something. 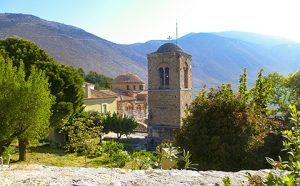 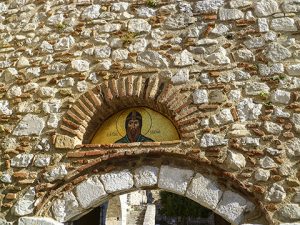 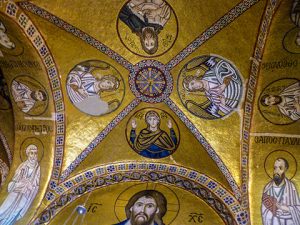