We are sailing out of Venice, one of the world’s most famous places, headed for Pula, Croatia, which is—to many people—quite obscure. 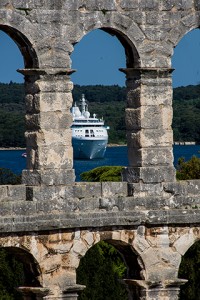 Above, Silver Cloud at anchor in Pula today, seen through one of the arches of the Roman amphitheater, and below, beyond orange rooftops in town 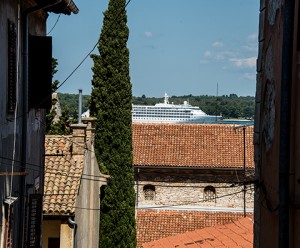 But Pula has had its moments.

Some will tell you it all began with Jason and the Argonauts.

According to legend, and a few inconclusive smidgens of archeological evidence, Pula was founded almost three thousand years ago by some of the crew of the Argo.

In the many-times told story, the son of the King of Colchis chased Jason and the crew of the Argo—the Argonauts—after they stole the Golden Fleece.

Colchis was an ancient nation on the east coast of the Black Sea. Today it is western Georgia, extending into Russia at Sochi.

Somewhere around what is now Pula, the story goes, the son of the king of Colchis was killed in battle.

Killing a king—or his son—is usually not something that pleases the ruling powers. And so, Jason’s men sought refuge…and founded Pula.

Now, remember: Jason and the Argonauts is a legend.

But some group did found Pula at about the time of the story.

The truly ancient story of the region includes evidence of ­homo erectus from about 1 million years ago caves near Pula.

Archeologists and anthropologists believe the settlers of the Bronze Age are connected to sites found along the Danube. 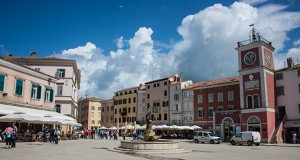 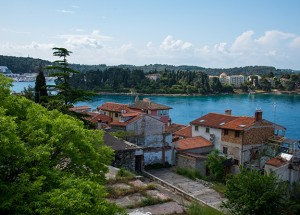 When the Romans conquered the Istrian Peninsula in the 2nd century BC, Pula became a military stronghold and from an important commercial port.

The Romans used the fine harbor as a landing place for conquests of the surrounding areas after 177BC. The Romans also added water supply and sewage systems and fortified the city with a wall and ten gates.

Some of those gates still stand: the triumphal Arch of the Sergii, funded by Salvia Postuma Sergia in 30 BC, was a monument to three members of her family. The arch was so spectacular it was said to have lured Michelangelo to sketch it during a visit to Pula in the 16th century.

ARCH OF THE SERGII 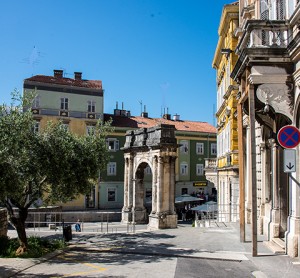 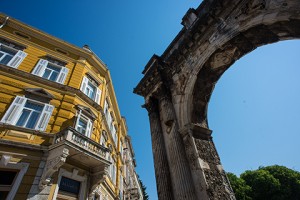 In the yellow building along the Arch of the Sergii, the great Irish writer James Joyce taught English in 1904.

The Twin Gates (Porta Gemina) date from the mid-2nd century, replacing an earlier gate; a small section of the old city wall survives nearby.

The Gate of Hercules dates from the 1st century. At the top of the single arch is a sculpture of the bearded head of Hercules, and the names of some of the founders—or at least wealthy contributors—of the town.

The large amphitheater, with accommodations for 20,000 spectators, was built between 27BC and 68AD. In Roman times it was surrounded by temples of Jupiter, Juno and Minerva.

Today, it is the sixth-largest preserved amphitheater in the world.

THE AMPHITHEATER OF PULA 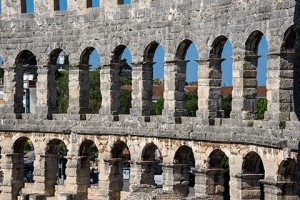 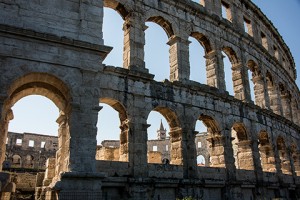 In the 20th century, in the time of the Italian fascist administration, plans were made to disassemble the arena and move it to mainland Italy, but that huge task was never undertaken.

Instead, you can catch a glimpse of it up a city street above the port.

The Monastery of Saint Francis was said to have been established by Saint Antony of Padua in 1227. 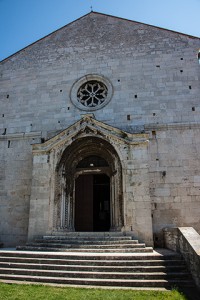 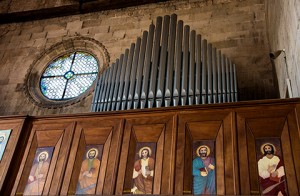 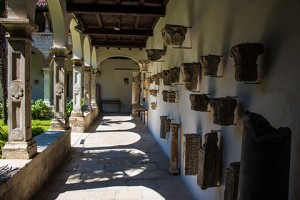 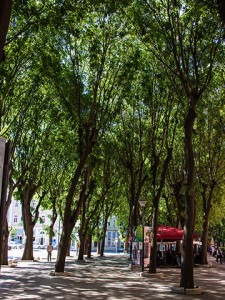 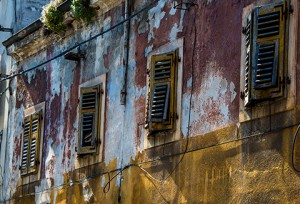