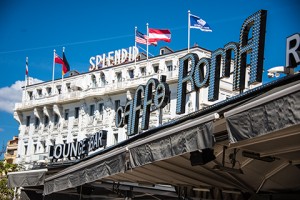 The Splendid is one of a dozen luxe hotels along La Croisette, the seaside promenade of Cannes

The Grande Dame of Cannes, along the La Croisette promenade facing the beach, is the InterContinental Carlton Cannes. The 343-room luxury hotel was built in 1911.

Which brings us to Agustina Otero Iglesias, born in Galicia, Spain in 1868.

As a young woman, she became a celebrated dancer, adopting her character La Belle Otero, a version of an Andalusian gypsy.

She became a star of Les Folies Bèrgere in Paris. And along the way she became one of the most popular—and celebrated—courtesans of France.

She was said to be close friends with the likes of Prince Albert I of Monaco, King Edward VII of the United Kingdom, several Kings of Serbia and Spain, the Russian Grand Dukes Peter and Nicholas, and others.

She did quite well, accumulating a fortune of about $25 million dollars. But she was said to have gambled away nearly all of it, dying in 1965 in a modest one-room apartment at the Hotel Novelty in Nice.

Which brings us back to the, uh, cupolas of the Carlton.

According to some, the Carlton’s distinctive domes were designed to resemble the upper architecture of La Belle Otero.

Which is kind of frightening, except that La Belle Otero often wore conical, pointed devices. 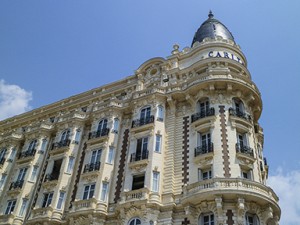 The Carlton Hotel in Cannes 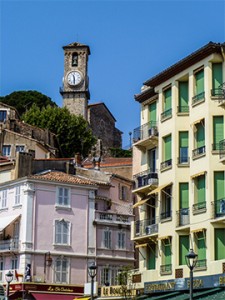 Out in the bay are two interesting specks of lands, Les Îles de Lérins.

The smaller island is Saint Honorat, which has a monastery and ruined castle.

Monks have inhabited the island since 410 and, at the height of their powers, owned Cannes, Mougins and Vallauris.

Medieval vestiges remain in the stark church, which is open to the public, and in the ruins of the 11th-century monastery on the sea’s edge.

The Cistercian monks sell their own wine and a strong liqueur called Lérina.

The larger island is Sainte Marguerite which also has a castle, shops, bars, and restaurants, and some beaches.

And on Sainte Marguerite is a prison said to have been one of several places that held the “Man in the Iron Mask” in the 17th century.

The prisoner may have been the illegitimate older brother of Louis XIV, or in the writer Alexandre Dumas’ version, the king’s identical twin. 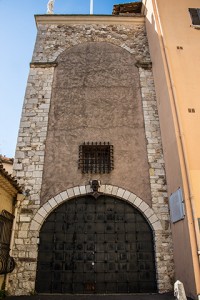 On Le Suquet hill,  the old town of Cannes,  the Tour du Masque, the Mask Tower, is the ancient watchtower.  A plaque there notes how the valiant militia of Le Suquet defended the place across the centuries against Barbary pirates and others.

And then it goes on to reference the Man in the Iron Mask, and it says in florid French: “Passers-by,  suspend your race and meditate on the suffering of the tortured, whose ghosts haunt these places. ” 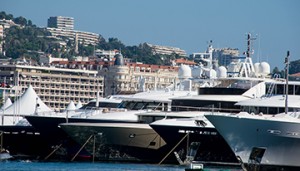 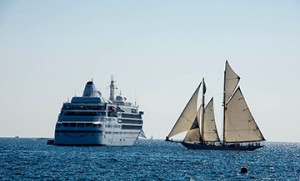 We were also here most recently on April 4; you can read my blog entry for that visit for more pointed commentary.