We’re back in Tortola, the largest and most populated of the British Virgin Islands, which are neither large nor well-populated.

British Virgin Islanders are classed as British Overseas Territories citizens, and since 2002 have had full British citizenship. Although the territory is not part of the European Union and not directly subject to EU law, its citizens are deemed to be citizens of the EU as well.

Just to make things confusing—or easier, if you prefer—the official currency of BVI is the U.S. dollar. 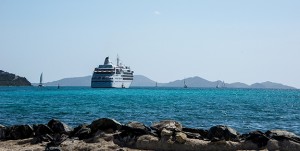 In previous posts about Tortola, I’ve mentioned that the Spanish–initially the most obvious of suspects, Christopher Columbus–were here first. Then came the Dutch, who named the place after an island in The Netherlands.

In the late 16th century, the English displaced the Dutch and established a sugar cane plantation colony on Tortola and the surrounding islands. Wherever there was sugar cane, there were slaves, because the industry was very labor-intensive.

In the late eighteenth century, new settlers arrived: Loyalists from the Thirteen Colonies after the American Revolutionary War who were given land grants by the Crown to encourage development. They brought their African-American slaves with them, outnumbering the British colonists.

The sugar industry dominated Tortola economic history for more than a century.

We are visiting Tortola three times this season. We came first on February 2, and again on February 11. You can read my posts for those days for more commentary and photos about Tortola.