Antigua, located on the major sailing route from Europe to the West Indies, was considered Britain’s “Gateway to the Caribbean.”

And it was for that reason in the late 18th century the Admiralty decided to beef up its resources on the island.

Nelson did not much like Antigua, calling it a “vile place” and a “dreadful hole.” He spent most of his time in the cramped quarters of his ship, H.M.S. Boreas, during his stay from 1784 to 1787.

Serving under Nelson at the time was Prince William Henry, later to be King William IV of England; he had much nicer accommodations on shore, Clarence House. 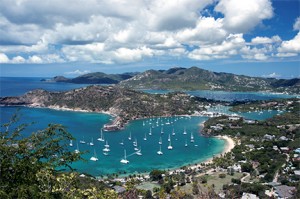 We were here most recently on February 10, and I invite you read that blog for more details of the sugar mill history of Antigua.

The old Boat House and Sail Loft was severely damaged by an earthquake in 1843 and then by a hurricane in 1871. All that remains are the massive boat house pillars.

The Naval Officers House was put up in 1855. It has a small set of exhibits including some artifacts of the shipyard and some of the vessels and men who visited. 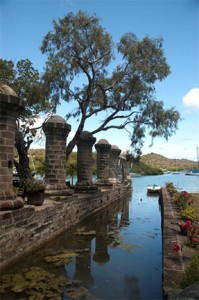