Hispaniola is the second largest island in the Caribbean. Three-quarters the size of Cuba, it has about twice the population.

On the mostly lush and well-situated island of Hispaniola are two sovereign nations: the Dominican Republic, about 19,000 square miles or 48,000 square kilometers,

As I mentioned in my welcome to this cruise in my post of 29 January…and I discussed in more detail in my lecture aboard ship…the island of Hispaniola is fertile ground for anthropological, political, economic, religious, and just about any other form of social science analysis and argument.

The Dominican Republic has the most successful economy in the Caribbean and is on the cusp of first world status. While its neighbor Haiti is among the world’s poorest countries, and the poorest anywhere in the Americas, beset by corruption, lack of health care and education, and poor infrastructure.

We called at the tourist enclave of Samana, a fine port in a still-developing part of the island.

For most of its history, up until its independence from Haiti in 1844, the country was known as Santo Domingo—the name of its present capital. Both were named after the nation’s patron saint, Saint Dominic, the founder of the Dominican Order in the 12th century.

On this visit we went for a hike off the tourist path to see St. Peter’s Evangelical Church.

This church was brought from America in the early 19th century by freed and escaped slaves who were invited to resettle on Hispaniola by the government which was the first in the new world to throw off their slave holders.  There was also aid by American abolitionists who sought a place to resettle African slaves.

About 6,000 came to Hispaniola;  most did not stay,  but a community of descendants live in and around Samana. 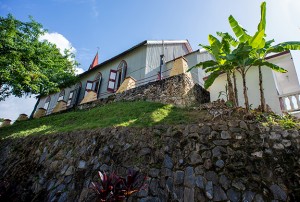 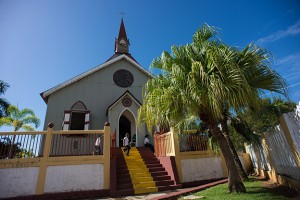 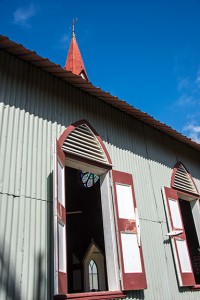 Los Haitises National Park is on the southern side of Samana Bay, about 15 kilometers or 10 miles from Samana. This is a protected virgin forest, accessible primarily by boat from Samana, with little road access.

Haitis means highland or mountain range in the Taino language, although the hills aren’t that tall: about 20 to 40 meters or 100 to 130 feet.

You’ll find many sea caverns, some with ancient pictographs and petroglyphs. The area was formed in the Miocene epoch, about 23 to 5 million years ago.

Included within the park is San Lorenzo Bay with numerous islets and mangroves.

The Cayo de los Pájaros, or Bird Key, is populated by frigate birds and pelicans. It is located near the enticingly named Boca del Infierno, or Mouth of Hell.

And the spectacular waterfall, El Limon, was used for the opening scenes of the original Jurassic Park movie.

We are arriving in the Dominican Republic during the humpback whale season, from January to March.

Now, please: no guarantees. These are live creatures and they do not consult the calendar…or the Silversea itinerary…before deciding whether to make an appearance. But we have good chance.

That’s about the size of a tourist bus, with some added weight…and no tourists aboard.