The name of this place should give it away, don’t you think?

Beautiful Island in the Sea.

And that it is.

In fact the local nickname for the island extends to La Bien Nommée, the Well-Named.

Belle-Ile, Brittany’s largest island, lies about 9 miles or 15 kilometers off the coast of Morbihan.

It is a place of beautiful beaches—about 60 of them, spectacular craggy coastline, and lovely pastoral interior.

At the island’s main town of Le Palais, the first thing you’ll notice is the star-shaped Citadelle Vauban, which was built by the famous French military engineer in the 18th century.

It was called by some, “The Battleship of the Atlantic.”

The fort now houses a luxury hotel-restaurant and a museum about the island’s history.

Many of Belle-Île’s residents are descended from the 78 Acadian families who returned from French Canada as part of Le Grand Dérangement, the expulsion of the Acadians, in 1765.

The dramatic landscape of the island has long drawn artists.

The most famous work was that of Claude Monet in the 1880s who was drawn to the wild north coast. According to local history he had to have an assistant hold down his canvas he worked to keep the wind from flinging it into the sea.

It is said that within an hour after first setting foot on Belle-Ile-en-Mer in August 1894, the French actress Sarah Bernhardt purchased an abandoned fort on the cliff top at La Pointe des Poulins.

She would spend parts of her last thirty years there. Bernhardt ended up creating a compound for friends and family, which she called her “menagerie.”

Bernhardt is buried in Paris. And here on Belle-Ile there is no sign of her other coffin, the one she often used as a place to sleep. She claimed it helped her understand her many tragic roles.

Here are some photos I took on our visit to the beautiful island in the sea, also including a peek at the museum chez Bernhardt. 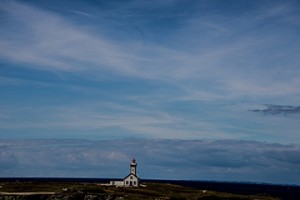 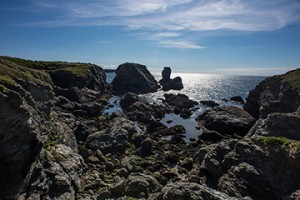 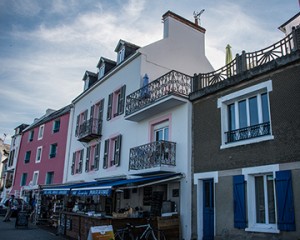 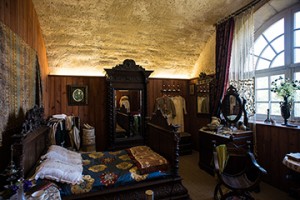