We begin our cruise with three days in the Dutch Caribbean, just above the top of South America. Things used to be a bit simpler in this part of the world, as simple as A-B-C, as in Aruba, Bonaire, and Curacao. Until 2010, the three islands were together an autonomous country within the Kingdom of the Netherlands.

Now, Aruba and Curacao have gone one small step toward independence: each is a constituent country of the Netherlands. They remain neighbors, but are autonomous of each other. And the smaller island of Bonaire has taken on a position as a “special municipality” of the mother country, tied in with Sint Eustasius and Saba.

And then next week, we will call at Phillipsburg on the Dutch side of the two-island nation of SInt Maarten.

To visitors, the political adjustments don’t matter all that much. The islands are still Dutch, in a Caribbean and African kind of way.

All three of the islands lie on the continental shelf of South America and are considered part of that continent. To their north, the sea floor drops away steeply. They call it the “blue edge” and it greatly prized by divers and snorklers. 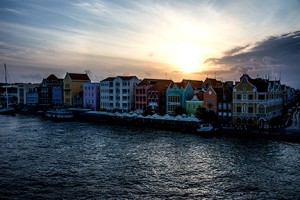 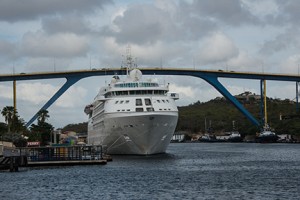 Sunrise at Willemsted,  and then the Silver Cloud came to the dock

Curacao, in the middle, sits about 40 miles north of Venezuela. Curaçao had been ignored by Spanish colonists because they found no gold.

But its natural harbor was ideal for trade.

In 1634, after the Netherlands achieved independence from Spain, Dutch colonists arrived.

In the 17th century, the Dutch West India Company used the islands as military and trade bases. 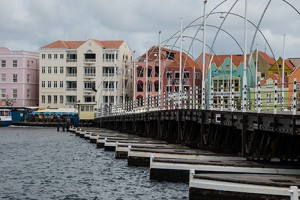 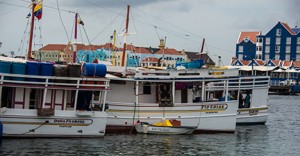 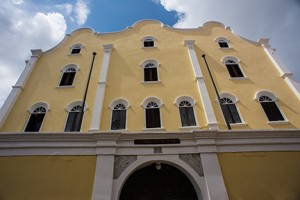 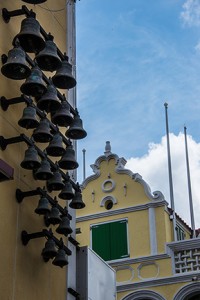 The Mikve Israel Synagogue from the 1750s, and a modern street scene in Willemsted

Although a few plantations were established in Curaçao, the first profitable industry established by the Dutch was salt mining.

Then in 1662 the Dutch West India Company made Curaçao a center for the Atlantic slave trade, often bringing slaves for sale elsewhere in the Caribbean.

Many Dutch colonists grew affluent from the slave trade, and the city built impressive colonial buildings.

The architecture in Willemstad blends Dutch and Spanish colonial styles. 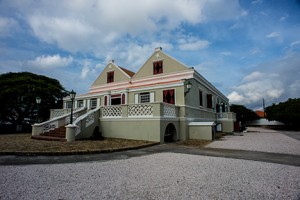 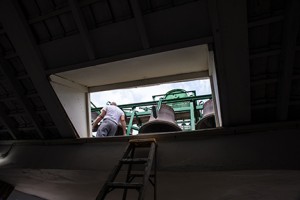 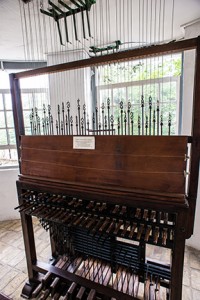 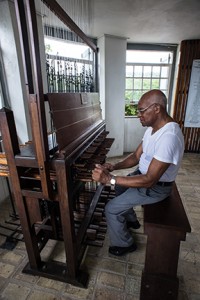 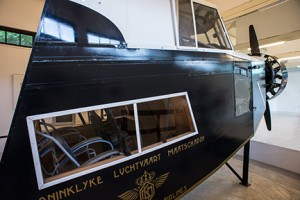 At the Curaçao Museum,  an old 47-bell carillon and the cockpit of a 1930s KLM tri-engine plane that served the island from Amsterdam

Out in the country are landhouses or plantation estates as well as former slave dwellings of West African style.

In 1795, a major slave revolt took place on the island, with as many as four thousand slaves fighting for about a month before being suppressed.

Slavery was abolished in 1863, which everyone would agree was a good thing.

But the economies of Curacao and neighboring Aruba were all but destroyed with the end of slavery.

Some of the slaves stayed on as tenant farmers, trading most of their crop for the right to farm. 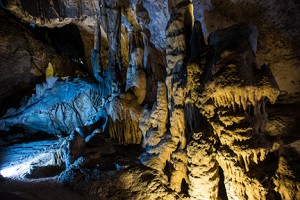 Flamingos on a salt pan,  and inside the Hato Cave

The islands only began to recover in the early 20th century with the construction of oil refineries to service newly discovered oil fields of nearby Venezuela.

Tourism plays a major role in Curaçao’s economy, although to a slightly lesser extent than other Caribbean countries because of oil refineries and other industries.

The Queen Emma pontoon pedestrian bridge crosses the harbor between the Punda and Otrobanda districts.

The 67 meter or 220 foot-long bridge swings open to allow ships to pass. 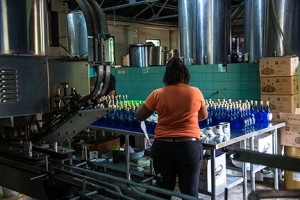 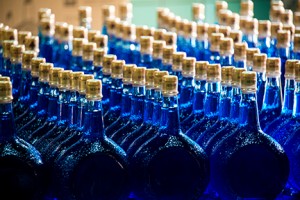 Aruba, the westernmost island, is just 15 miles off the coast of Venezuela.

Aruba is about 20 miles or 32 kilometers long, and at its widest point 6 miles or 10 kilometers.

Unlike much of the Caribbean, Aruba has a dry climate; sections are desert-like landscapes with cactus and there are no rivers. 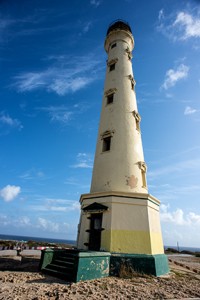 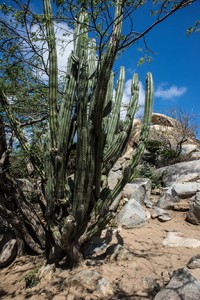 It has white sandy beaches on the western and southern coasts of the island, relatively sheltered from fierce ocean currents. This is where most tourist development has occurred.

The northern and eastern coasts, lacking this protection, are considerably more battered by the sea and are mostly untouched.

One of its natural wonders was the Natural Bridge, a large naturally formed limestone bridge on the north shore.

It wasn’t that large, actually. Or all that wondrous. But every tour of the island went there.

Not so much anymore. The Natural Bridge collapsed in 2005.

THE COAST OF ARUBA 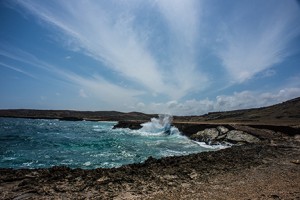 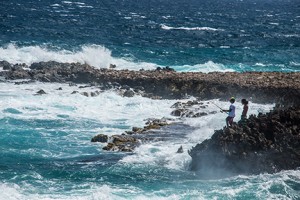 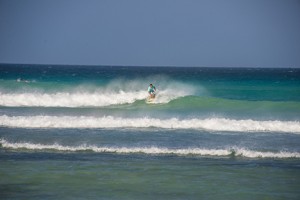 The capital and port is Oranjestad.

The Arawak heritage is stronger on Aruba than on most Caribbean islands. Although no full-blooded aboriginals remain, the features of many islanders clearly indicate their genetic heritage.

Most of the population is descended from Caquetio Indians, Africans, and Dutch, and to a lesser extent Spanish, Portuguese, English, French, and Sephardic Jewish ancestors.

THE WRECK OF THE ANTILLA

Just offshore of the island lies the wreck of the German merchant vessel Antilla,which was intentionally scuttled by her captain and crew in April of 1940 to avoid being seized by what remained of the Dutch government at Aruba and by American and British forces in the Caribbean. The 400-foot-long freighter lies about 50 feet down, patrolled now by fish, scuba divers, and visitors in a semi-submersible vessel like the one I used. 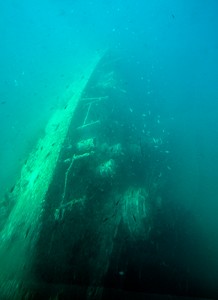 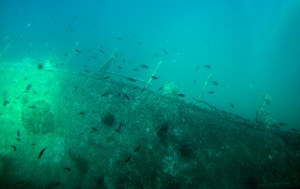 The easternmost of what once were the ABCs, Bonaire is 50 miles above Venezuela.

Bonaire is the smallest of the A-B-Cs, with a population about 18,000.

The Spanish thought Bonaire could be used as a cattle plantation, and so they also imported domesticated animals from Spain, including cows, donkeys, goats, horses, pigs, and sheep.

Beginning in 1623, ships of the Dutch West India Company called at Bonaire to obtain meat, water, and wood.

In 1633, the Dutch, having temporarily lost Sint Maarten to the Spanish, retaliated by attacking Curaçao, Bonaire, and Aruba.

Curaçao emerged as a center of the slave trade, while Bonaire became a plantation island. A small number of African slaves were put to work alongside Indians and convicts, cultivating dyewood and maize and harvesting salt.

We arrived in Bonaire on the last day of their Carnival. This is a small island, but this is the big day and the sense of anticipation grew from morning until afternoon and the scheduled start of the parade. This being the Caribbean, the official starting time was “maybe 2:30 but probably 3pm”, which meant it kicked off in a remarkably timely fashion at 3:42.

Here are some photos I took: 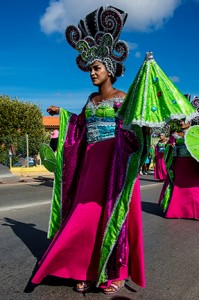 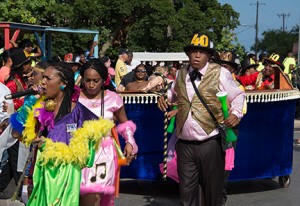 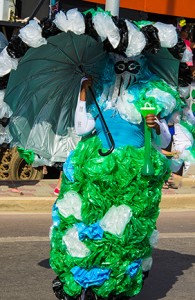 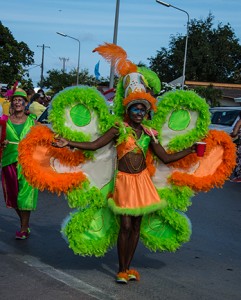