When most of us think of the Apocalypse, we think in dire and dramatic biblical terms.

Or perhaps in explosive, cataclysmic end-of-the-world-as-we-know-it Hollywood blockbusters. Bruce Willis, Arnold Schwarzenegger, War of the Worlds, Planet of the Apes, Celebrity Apprentice. You tell me which one frightens you most.

Patmos is a lovely, peaceful small island in the Aegean Sea, one of the northernmost of the Dodecanese islands of Greece. 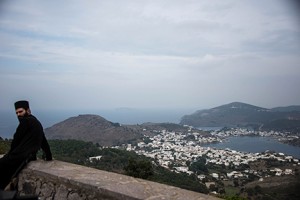 Above Skala, the port of Patmos. Photo by Corey Sandler

It lies just off the coast of Turkey and the continent of Asia, west of the ancient Greek and Christian site of Ephesus. It’s only about 34 square kilometers or 13 square miles, and the population hovers around 3,000, give or take a few additional thousands when a major cruise ship comes in.

The earliest remains of human settlements, pottery shards at Kastelli, date to the Middle Bronze Age (about 2000 BC).

Jumping forward to the time of the Ancient Greeks, the Patmians identified themselves as Dorians descended from the families of Argos, Sparta and Epidaurus. Later came those from Ionian Greek tribes. 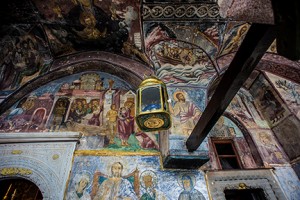 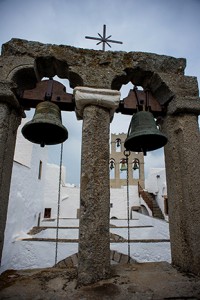 The Monastery of St. John the Theologian. Photos by Corey Sandler

So why is this the island of Apocalypse?

Because it is believed that it was here that the final book of the New Testament was written. And that book, written in Koine Greek, received its title from its first word: apokalypsis.

It does not mean “The end of time” or “the destruction of life as we know it. Literally translated, APO-KALYPSIS means “un-covering.”

Over time and through countless religious analyses, it has come to mean unveiling of a hidden truth, a revelation. And that is the name in many cultures for that last book of the New Testament: the Book of Revelation

The book’s introduction states that its author, John, was on Patmos when he was received a vision from Jesus and wrote it down; in some recountings John had a helper, Prochorus, who did the transcribing.

John says that it was on Patmos that he “heard … a great voice, as of a trumpet,” commanding him to write a book and “send it unto the seven churches.” Most modern scholars believe it was written around AD 95, although some date it from around AD 60.

And for good measure, he is also identified in some places—including here in Patmos—as John the Theologian.

It is worth noting that this last book of the New Testament is a bit out there.

It is full of very rich, very extravagant, and very obscure references: the Whore of Babylon, the Beast. Its final section details a core Christian belief, the Second Coming of Jesus Christ, the anticipated return of Jesus to Earth.

Some theologians treat the Book of Revelation as just that, a description of some pretty unusual future events.

Others see in it a hopeful allegory of the fall of the Roman Empire. And then there are those who think of it as more symbolic: a reference to the spiritual path and the ongoing struggle between good and evil.

Meanwhile, the people of Patmos enjoy their special place in the world, a mix of things sacred and secular. 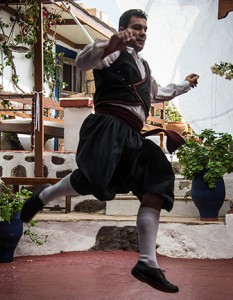 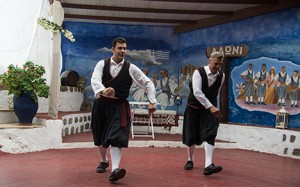 Dancers at a taverna in Patmos. Photos by Corey Sandler