Even our wondrous small ship cannot sail into Syntagma Square in Athens.

We instead dock  the port of Piraeus, about 10 traffic-clogged miles from Athens.

On this cruise, we are just passing through, in the middle of our cruise. And so we docked at the outer harbor at a set of quays built for the 2004 Olympics.

Piraeus is not a place where many tourists come to linger; it’s a very busy port for ferries to the Greek Isles and elsewhere, and also much used as a cruise ship port.

Think of it as a Greek version of Civitavecchia—the port for Rome—and you’re on the right track.

Piraeus is the chief port in Greece, the largest passenger port in Europe, and by some estimates the third busiest in the world, servicing about 20 million passengers per year—most of them on ferries.

The Acropolis, the fortified citadel and the state sanctuary of the ancient city of Athens, is fully deserving of a spot on anyone’s bucket list. 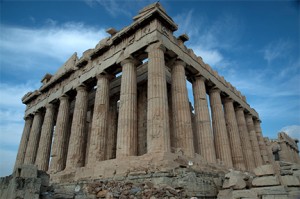 The Parthenon. Photo by Corey Sandler

The Acropolis is perched on a flat-topped rock that rises 150 m (490 ft) above sea level in what is now the heart of the city of Athens.

In the Late Bronze Age, the Acropolis was surrounded by a massive fortification wall like those at Mycenae and Tiryns in southern Greece. This wall remained in use long after the collapse of Mycenaean civilization, and functioned as the fortifications of the Acropolis for several centuries.

By the middle of the 8th century B.C., at least part of the Acropolis had been redeveloped into the sanctuary of the goddess Athena, the patroness of the city. Athena, as in Athens.

In the 6th century B.C., the first monumental stone, Doric temple of Athena is built on the Acropolis.

However, the Acropolis was captured and destroyed by the Persians in 480 B.C. But the Athenians were persuaded by the statesman Pericles to rebuild the temples on the Acropolis on a grand scale.

It was during the second half of the 5th century B.C. that the most famous buildings on the Acropolis — the Parthenon, the Erechtheion, the Propylaia, and the temple of Athena Nike, were constructed. 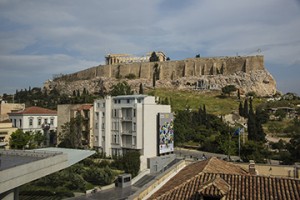 The Acropolis, seen from the new museum at its base. Photo by Corey Sandler

For more than a millennia, the structures on the hill stood there—crumbling, shaken by earthquakes, an explosion in an Ottoman arms dump, and sometimes looted for building materials or souvenirs.

The first modern archaeological studies and excavations, and the necessary conservation, study, and publication of the monuments, were begun in the 1830s soon after Greek independence. Work continues to the present day

Today the Parthenon is considered the most important surviving building of Classical Greece, the culmination of the development of the Doric order.

In 1806, in an act some Greeks consider vandalism, Thomas Bruce, the 7th Earl of Elgin (the British ambassador to the Ottoman Empire from 1799–1803), was given permission by the Ottoman Turks to remove some of the surviving sculptures and friezes.

Elgin’s agents removed about half of the surviving sculptures of the Parthenon, as well as architectural members and sculpture from the Propylaea and Erechtheum.

Elgin at first used many of the pieces to decorate his mansion in Scotland. Later, he decided to sell off his holdings to pay debts.

Following a public debate in Parliament and subsequent exoneration of Elgin’s actions, what are now known as the Elgin Marbles or the Parthenon Marbles were purchased by the British government in 1816 and placed on display in the British Museum, where they can still be seen.

The Greek government has been seeking the return of the sculptures for decades.  And even if you’ve been to Athens before, the Greeks—never mind all of their financial foibles—have done an extraordinary job with the design and construction of the New Acropolis Museum, which opened in June of 2009. 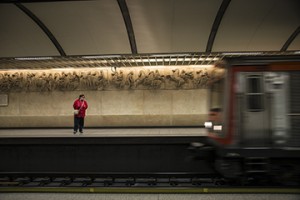 The Athens Metro at the Acropolis. The commuter train connects to Piraeus. Photo by Corey Sandler

More than four thousand items are on display, including a portion of the frieze of the Parthenon—the part that is not in the British Museum, they will remind you. 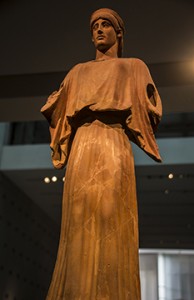 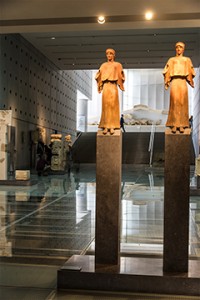 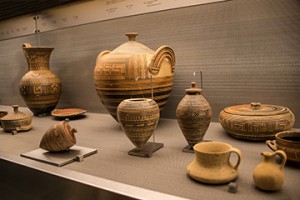 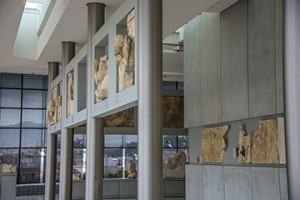 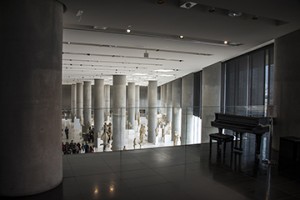 Inside the Acropolis Museum. Photos by Corey Sandler 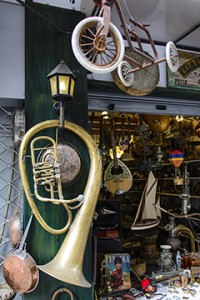 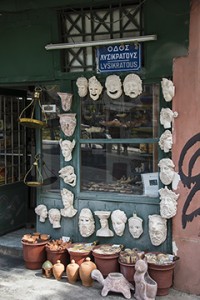 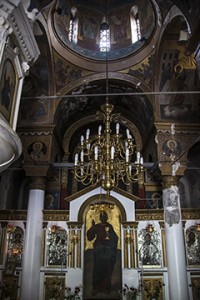 Athens at the base of the Acropolis. Photos by Corey Sandler