Volos a place known for its Milk, a much-sought-after Fleece, and its Hard Rock cafés.

Milk, as in Milk of Magnesia.

Fleece, as in the Golden sheepskin sought after by Jason.

And many of the cafés—and half a dozen spectacular monasteries—of this region are perched on rocks, seemingly defying God and nature to return them to earth.

According to legend, it was here—from Iolkos—that Jason set sail on the Argo in search of the Golden Fleece; the Argonauts intended to bring back the booty from Colchis, which is today the Black Sea coast of Georgia.

Modern Volos has one of the largest cargo ports of Greece, a fishing fleet, plus ferry and hydrofoil to the nearby Sporades Islands, which include Skiathos, Skopelos and Alonissos.

We eat rather well here aboard ship. But if you somehow become peckish while ashore, the local specialty are “Tsipouradika” shops, more than 400 spread through the city.

These are basically bars that sell tsipouro. Then choose an accompaniment: a tasty tidbit of fish, meat, nuts, olives, dried fruits, halva, or paximadi (rusk or twice-baked bread.) Think of Mezes from Turkey, or Tapas from Spain.

Tsipouro is a pomace brandy, particular to this part of Greece as well as Crete.

It’s a strong distiled spirit, about 40 to 45 percent alcohol by volume, and is produced from the pomace (the residue of the wine press). The anise-flavored version is similar in taste and effect of ouzo, although the two drinks are made very differently.

Metéora is one of the largest and most important groups of Eastern Orthodox monasteries in Greece. 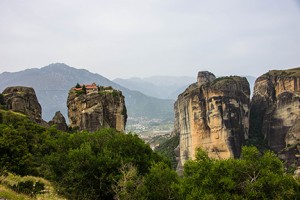 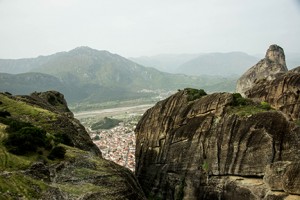 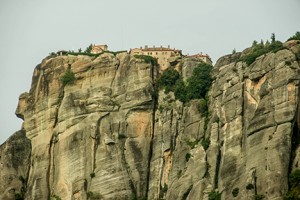 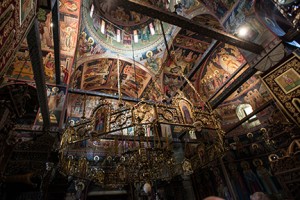 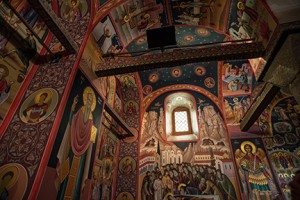 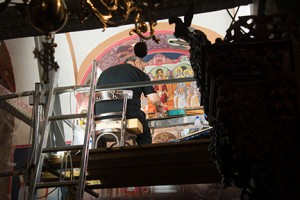 They are also some of the most spectacular places in this part of the world, on the UNESCO World Heritage List.

The word Metéora is derived from old Greek meaning “middle of the sky”. From the same origin we have the words “meteor” and “meteorite”, rocky asteroids that enter into the earth’s atmosphere and burn up or explode.

These cosmic events were certainly noticed by the ancients, unexpected changes in the middle of the sky. The name for the monasteries, therefore, is self-evident.

The monasteries are built on natural sandstone rock pillars, at the northwestern edge of the Plain of Thessaly near the Pindus Mountains, in central Greece about two-and-a-half hours away from Volos by car or coach.

The pinnacles are believed to be about 60 million years old, the remnants of an ancient sea.

In modern times, the 9th century, an ascetic group of hermit m­onks moved up to the ancient pinnacles to live in caves and cutouts in the rocks as much as 1800 feet or 550 meters above the plain. They were not much disturbed by visitors.

By the late 11th and early 12th centuries, a rudimentary monastic state had formed, centered around the still-standing church of Theotokos (mother of God).

More than 20 monasteries were built; six remain today: four were inhabited by men, and two by women, each with fewer than 10 inhabitants.

Originally, the only means of reaching the monasteries was by climbing a long ladder, which was drawn up whenever the monks felt threatened. Food and supplies and occasionally people were hauled up in large nets.

According to oral history, the ropes were replaced only “when the Lord let them break”.

It was only in the 1920s that steps were cut into the rock, making the complex accessible by bridge from the nearby plateau.

Two of the buildings are open to tourists. The Agios Stephanos Convent, which is relatively easy to reach, and the Varlaam Monastery which requires ascent of stairs.

And today you can drive there–most of the way–by motor coach or private car. If you’re concerned about heights, have a shot of tsipouro. Give the driver a bottle of cool water.

Photos by Corey Sandler. If you would like to purchase a high-resolution copy of an image, please contact me.