In the Hall of the Mountain Data Farm

Our northernmost call on this cruise is at Kristiansund.

It’s a small place, much less populated than the confusingly named Kristiansand which is one of the most southerly points of Norway.

Kristiansand was named in honor of King Christian IV, who founded that southerly city in 1641, on a spit of SAND.

As should be very obvious, Kristiansund was named after King Christian VI in 1742. It gets the second half of its name from SUND as in STRAIT. A Strait is a long body of water that connects two larger bodies: sea to sea, for example. 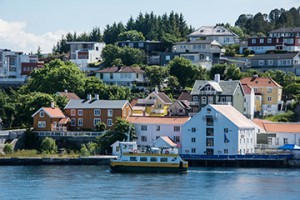 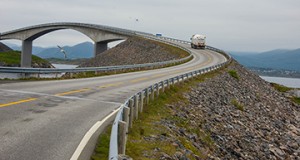 The ferry, claimed to be the oldest continually operated mechanized transportation in the world, crosses the harbor at Kristiansund to the various islands that make up the remote town. Just outside of town is a stretch of the spectacular Atlantic Road which connects many of the small communities along the western coast of Norway. Photos by Corey Sandler

So Kristiansund is where we are headed, about one-third of the way up the Norwegian coast at about 63 degrees north latitude.

That’s pretty far north, but not quite within the Arctic Circle, which is an arbitrary demarcation at 66 degrees 33 minutes and 44 seconds north, about 384 kilometers or 239 miles further north than Kristiansund.

The position of the Arctic Circle is not fixed.

It directly depends on the Earth’s axial tilt, which fluctuates within a margin of 2 degrees over a 40,000-year period, mostly due to tidal forces resulting from the orbit of the Moon.

The Arctic Circle is currently drifting northwards at a speed of about 15 meters or 49 feet per year.[whohit]-Kristiansund 1Jul-[/whohit]

Because it exists on small islands, Kristiansund is one of the most densely populated cities of Norway. 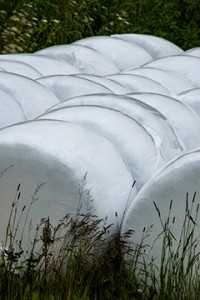 Bales of hay and other food for livestock, stored for the short summer and the long winter ahead. Photo by Corey Sandler

So what do they do in the winter? Sing, I guess.

The splendid Art-Nouveau Kristiansund Opera House, completed in 1914, is the oldest opera house in Norway and one of the few that survived World War II. Each year Kristiansund puts on Opera Festival Weeks in cold February: Norway’s largest opera and musical theater festivals, one of the largest in all of Scandinavia.

I’ve been to Norway and Kristiansund many times, but always have concentrated on the mountains and the fjords. This time, I dug deeper–underground to the Naas marble mine between Kristiansund and Molde. 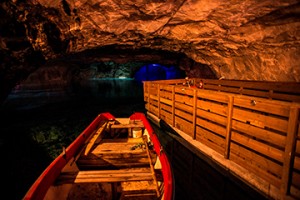 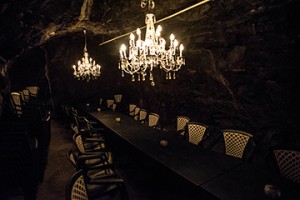 The barges to the interior of the cave, and a banquet hall 500 meters below ground. Photos by Corey Sandler

The mine has been in operation for decades, a family affair. It began as a source of slabs of marble and cemetery markers. In more modern times, the marble has been used for industrial purposes: ground up for use in other products including as a principal ingredient in the high-gloss paper used in some magazines and books.

But the global consumption of paper for books and magazines has been in decline since the advent of the personal computer and especially reading tablets like the Kindle and the iPad. And so the Naas marble mine has looked for something else to do with its mountain and the 60 or so kilometers of roads and caverns within.

Ironically, it may be computers that saves the business they are threatening.

The owners of the mine are installing high-power electrical lines and fiber optic cables and hope to rent out the caverns for use as data farms, holding huge amounts of information for companies all around the world.

Why in a mine? Because it offers a controlled and stable environment with inexpensive cooling for the thousands or millions of disk drives and memory chips.

That’s the plan. In the meantime, we took a tour by raft and on foot in what I would expect Norwegian composer Edvard Grieg would call the Hall of the Mountain Data Farm. 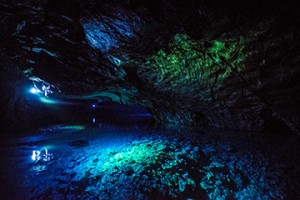 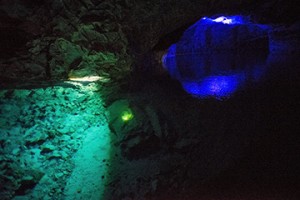 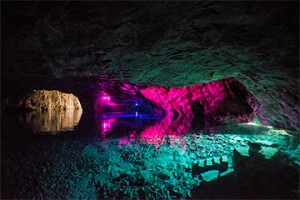 Inside the Naas marble mine. Photos by Corey Sandler