Two Millennia of Ups and Downs

The penultimate port call on our superb cruise in the Baltic Sea was Tallinn. On this cruise we had just about everything: history, culture, art, music, great food, and good company. The only thing we lacked was a touch of summer: we finished our tour in near-wintry temperatures and winds.

Tallinn is one of the best preserved medieval towns in Europe, a UNESCO World Heritage Site.[whohit]-Tallinn 18Jun-[/whohit]

Over the centuries Estonia has been assaulted, occupied, liberated, and reoccupied by: Crusaders, Danes, early Germans, Swedes, Russians, Lithuanians, the Soviets, Nazi Germany, the Soviet Union again, modern Russia, electronic pirates of the Internet, and tourists. 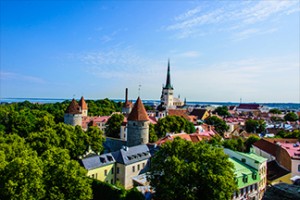 The Lower Town of Tallinn on Toompea Hill. Photo by Corey Sandler

Combatants included the armies of Ivan the Terrible of Russia, Denmark, and Poland. The winner was Sweden, but battles with Poland continued for decades.

The Swedish period in Estonian history was a time of great cultural advancement. The University of Tartu—still in existence—opened in 1632.

In the Great Northern War—the same conflict that led Peter the Great to found Saint Petersburg—Sweden fought Russia, Denmark, and Poland. Russia claimed Estonia in 1710, and for the next two centuries its people were powerless serfs to the Tsars.

The Russian empire brought its own customs, architecture, and the Russian Orthodox religion. 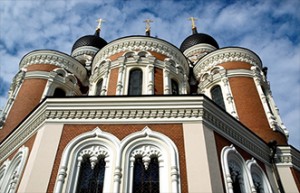 The Alexander Nevsky Cathedral in the upper town of Tallinn, a reminder of the Russian presence in old Estonia. Photo by Corey Sandler

Peter I began building the magnificent Kadriorg palace in 1718. Nicolo Michetti (who later designed Peterhof in Petersburg) created a Baroque version of an Italian villa for the Russian Emperor. 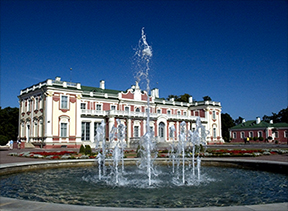 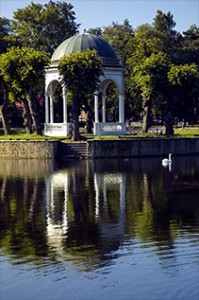 Kadriorg in Tallinn; across the park is the elegant Swannery. Photos by Corey Sandler

It’s not always possible to start out with a palace; sometimes you need more modest accommodations during construction.

Peter bought a little cottage nearby. The house, with a kitchen and four rooms, is pretty much the way it was when Peter used it. His extra-tall chair dominates the tiny dining room.

Outside Kadriorg is Swan Lake. Some of the trees were supposed to be replanted in gardens in Saint Petersburg. After the death of Peter I, the horse chestnuts and the swans stayed in Kadriorg.

In the 19th Century came the National Awakening, spread by schools, literacy, books, and newspapers.

In Tartu in 1869, a song festival launched a movement to revive the Estonian national identity.

Tsar Alexander III, the repressive ruler who took the Russian throne in 1881 after the assassination of his father in Saint Petersburg sent troops to Estonia to enforce Russification.

Alexander Nevsky Cathedral is Tallinn’s largest and grandest cathedral. The richly decorated Orthodox church was built on Toompea Hill in 1900.

Taking advantage of the chaos in Russia caused by World War I and the Bolshevik Revolution, Estonia declared independence on February 24, 1918.

That did not last long. Within days, Germany took over. And then in November of the same year, Germany capitulated and the Soviets moved back in.

But the Estonians fought back while the Soviets tried to sort out their own internal conflicts.

In the Tartu Peace Treaty, signed February 2, 1920, Soviet Russia renounced claims to Estonia and Finland “for all time.” In 1921 the Republic of Estonia was accepted into the League of Nations. Social and political reforms were enacted and the country became a presence in the Baltic.

But as war again raged across Europe in 1939, Hitler and Stalin engineered the Molotov-Ribbentropp Pact, carving Eastern Europe into spheres of influence between Germany and the Soviet Union.

On June 16, 1940, Stalin accused the Baltic states of aggression and demanded the right to occupy them. Elections took place in July, with Soviet-approved candidates.

The peace between Hitler and Stalin ended abruptly on June 22, 1941 when Germany invaded Russia and its occupied states. Germany held Estonia for three years.

Few Estonians speak well of the Soviets, who exercised tight control over almost every aspect of life. 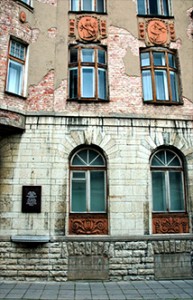 The former KGB headquarters in Tallinn; a plaque out front tells passersby that this was at the core of the Soviet oppression. Photo by Corey Sandler

Over the coming decades, hundreds of thousands of ethnic Russians were sent to live in the Estonian territory: Russification once again.

And Estonia lost more Jews during the Soviet times than the German occupation. The Jews were doctors, lawyers, teachers; the Soviets considered them class enemies and they were deported, many to Siberia.

Estonia would not regain its independence for fifty years, a mostly unwilling member of the USSR until 1991.

On February 24, 1977 a small act of rebellion: the blue-black-white Estonian flag was briefly raised in Tartu to mark the 59th anniversary of the first Estonian Republic. 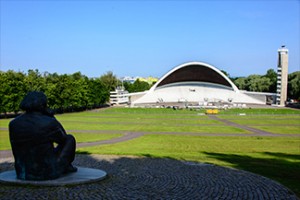 The Song Festival Grounds in Tallinn. Photo by Corey Sandler

In June 1988, more than a hundred thousand people packed the Song Festival Grounds, across the harbor from the heart of Tallinn. A few months later came the first public demand for independence. 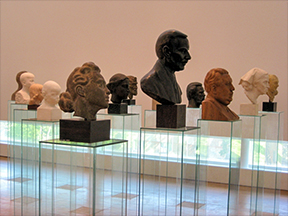 The very avante-gard Kumu museum, near Kadriorg, includes a room full of busts with a hidden speaker system; they murmur to each other. Photo by Corey Sandler 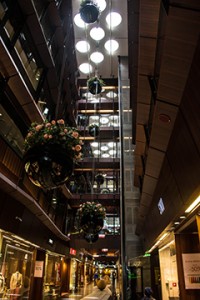 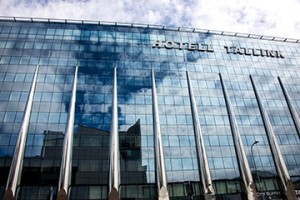 The very modern side of Tallinn, across from the old city. Photos by Corey Sandler