Sochi was a place little known outside of Russia until just months ago.

Vladimir Putin, the Russian government, and some of the companies and institutions under his thumb spent something on the order of $60 billion to create a show demonstrating the emergence of a “new Russia.”

And then just days after the Olympics came to a successful conclusion, Putin demonstrated a return to what many consider the “old Russia.”

And so today, while the world’s attention is riveted on the events in Crimea and The Ukraine, in Sochi the people are left to wonder, “what’s next?” 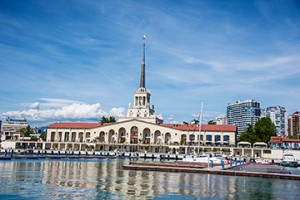 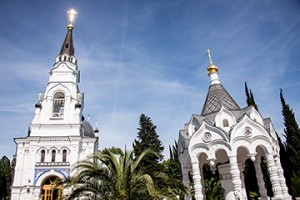 The Maritime Terminal of Sochi and the historic Cathedral of Saint Michael, the first a vestige of Soviet times and the second one of the few remnants of the Czars. Saint Michaels was completed in 1890, left neglected during the Soviet Era and restored in 1993. Photos by Corey Sandler

When Sochi took the world spotlight in February, it put on display a place very much symbolic of the enigma that was Russia, then the Soviet Union, and now the Russian Federation.

Putin spent a huge amount of money on a project that may never turn a profit, but that word—even in modern Russia—does not always enter discussions.

But before Putin, another Russian ruler made his mark on Sochi.

The Winter Games might not have come to Sochi were it not for Joseph Stalin. From 1937 until his death 16 years later, Stalin came down from Moscow to the Black Sea for rest and recuperation and the other things he did as ruler.

And with Stalin came others in the Communist political elite.

Vladimir Putin has his own presidential residence not far from where Stalin stayed.

Putin came for the waters, and what was at first a rather primitive ski resort. 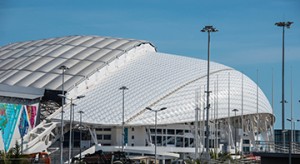 The stadium built for the opening and closing ceremonies of the Sochi Olympics. It was located in Adler, about 20 miles south of Sochi. Today, like much of the sites, it stands empty, in search of a new use. Photo by Corey Sandler

Sochi, is the unofficial “Summer Capital” of Russia.

Russia is a wintry country. It’s hard to find a place where there isn’t snow and winter sports in January and February.

But Vladimir Putin, who does often play by his own rules, chose Sochi. 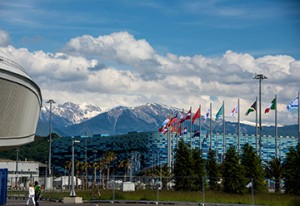 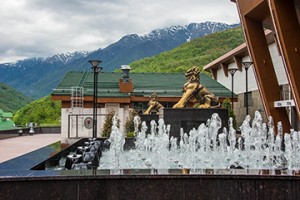 Up in the mountains about 40 minutes above Sochi is Krasnaya Polyana and the Rosa Khutor ski areas. It is a spectacular site, and the snow cover in late April was still there although that is not a certainty every year. Photos by Corey Sandler

As Czarist and then Soviet Russia began to use Sochi as a summer resort, the city built attractions like the Arboretum and Riviera Park. Intensive resort construction began in the 1920s. During World War II, most of the city was given over to rehabilitation hospitals for wounded soldiers.

While coastal Sochi was developed, up in the Caucasus Mountains, Krasnaya Polyana was mostly left alone. But after the fall of the Soviet Union, some locals developed a small and very rough ski area. Pure capitalism and sweat equity.

Things began to change in 2000, when new president Vladimir Putin tried it out. He returned many times.

In July 2007, Putin went to Guatemala City to speak—in English, something he does not do often in public—to the International Olympic Committee.

In 2008, the Gazprom oil company bought the ski area. According to some, this was not a friendly takeover. 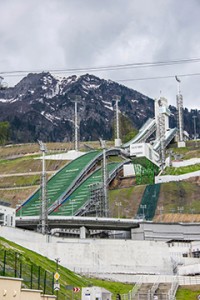 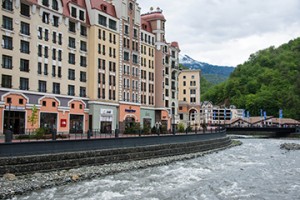 The ski jump hill at the mountain cluster and the Rosa Khutor Olympic Village. Photos by Corey Sandler 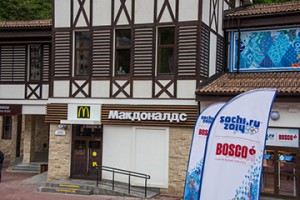 A branch of the American embassy at the Olympic site. Want to supersize those fries? Photos by Corey Sandler

Depending on how you choose to look at it, the 2014 Winter Olympic were one or more of the following: Vladimir Putin’s extravagant personal party and financial bonanza for his closest buddies, a sincere effort to regenerate the economy of the Russian Black Sea Coast, a signal that Czar Putin is on the throne, restoring Russia to its former greatness. At least until the bills come due. 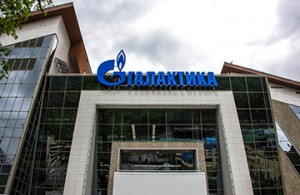 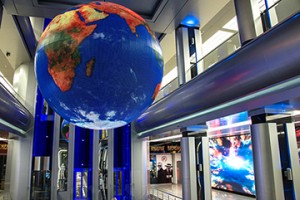 Gazprom, the Russian Oil monopoly about 50 percent owned by the state, developed much of the mountain cluster for the Sochi Olympics. They also built the huge Gazprom Galaktika Center as a reception area for VIPs and guests. Two months after the Olympics it stands mostly empty; we toured theaters and halls and displays about the Russian Space program completely unmolested by other visitors. Photos by Corey Sandler

But in the end, as Putin has demonstrated in Crimea, he does not really care much about what the outside world thinks of him: only those within the (expanded) Russian borders.