Dear readers: an update on our visit to Batumi.

Although guests who booked this cruise thought we were going to be making a call in the Republic of Georgia, I am sorry to tell you that is not correct.

We actually arrived in the Autonomous Republic of Adjara. 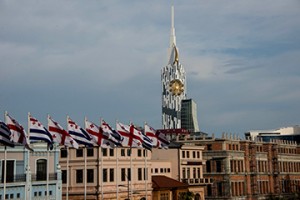 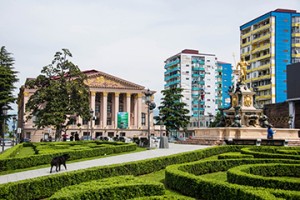 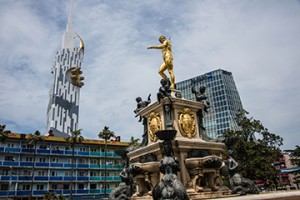 Old Batumi includes an impressive–and gaudy theater, set on a grand square with a gilded statue. Photos by Corey Sandler

Batumi is the regional capital of the Autonomous Republic of Adjara.

So it’s not Georgia?

No, except when it is Georgia. 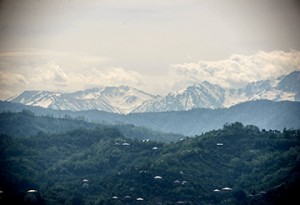 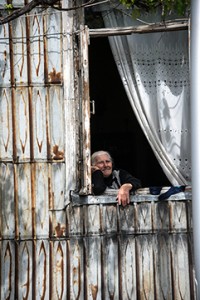 Adjara has its own constitution, and its own Parliament.

Adjara is in southwestern Georgia, extending from the Black Sea to the wooded foothills and mountains of the Lesser Caucasus. The highest mountains rise more than 3,000 meters (9,840 feet) above sea level.

The ancient Greek colony of Colchis had a settlement called Bathus, from the Greek phrase bathus limen meaning “deep harbor.”

Under Hadrian, it was converted into a fortified Roman port. Roman-Byzantine forces held it for most of the next eight centuries.

At the end of the 10th century, Batumi came under the unified kingdom of Georgia.

In the 15th century, the Ottoman Turks briefly conquered the town. The Ottomans returned and took the region in 1614.

Under the Ottomans most of the people of Adjara converted to Islam. And then in 1878, the Ottomans were forced to cede Adjara to the expanding Russian Empire, part of Russia’s push into the eastern end of the Black Sea.

Russia installed a railway in 1900 from Batumi to Tilibilisi and on to Baku, the capital and port city of Azerbaijan on the Caspian Sea.

Soon afterwards, an oil pipeline was completed from Baku to Batumi. Oil and politics and lots of money; little has changed in the past century.

As Russia fell apart during its Civil War, Adjara was occupied by Turkish and British troops from 1918 to 1920.

In 1921, the Turkish government ceded Adjara to the newborn Democratic Republic of Georgia on condition that autonomy be guaranteed for its Muslim population.

And then under the rising Soviet Union came the establishment of the Adjar Autonomous Soviet Socialist Republic.

For the next 70 years, it was an autonomous part of the autonomous Republic of Georgia, which was in turn a puppet state of the Soviet Union with only limited autonomy. 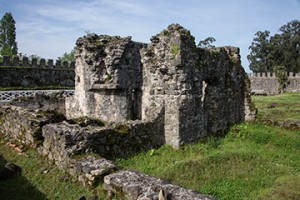 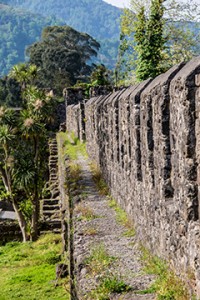 Gonio-Apsaros Fortress is about 15 kilometers or 10 miles south of Batumi, very close to the border with Turkey. The settlement of Gonio was a fortified Roman city within Colchis, dating from the 1st century or earlier.

The walls are younger, dating from the Byzantine era, and the parapets or merlons were added during Turkish occupation.

Skyscraper City, some call it.

Kazakh investors reportedly invested $100 million to purchase more than 20 hotels in Adjara. Other money comes from the Middle East. 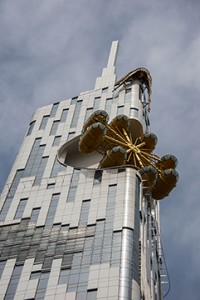 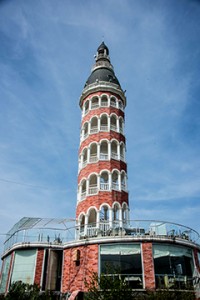 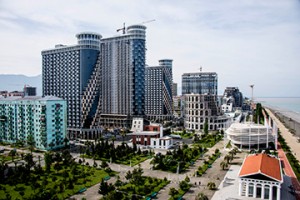 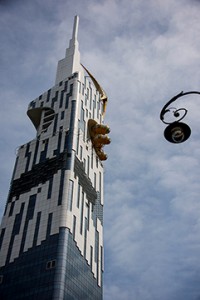 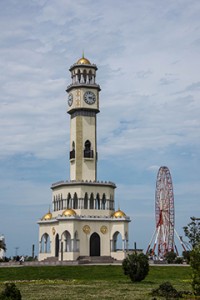 They love extravagant, unusual, sometimes gaudy, and often downright odd architecture in modern Batumi. Think of Las Vegas and Disneyworld, without the high culture. And yes, that is a Ferris wheel of sorts, built into the side of a technical institute along the seafront. Photos by Corey Sandler

For an outsider, the easiest thing about the Georgian language is its name: Kartuli. Other than that, speaking for myself at least, all is lost.

Their alphabet looks to me like a mashup of Farsi, Sanskrit, and an explosion at a noodle factory.

The Georgian language is not related to any major language. 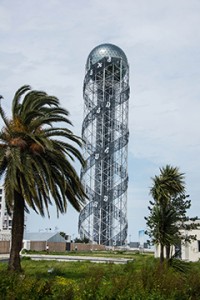 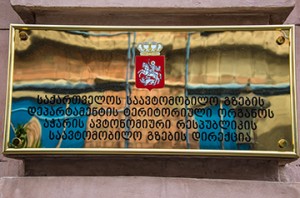 All photos and text copyright 2014 by Corey Sandler. If you would like to purchase a copy of a photo, please contact me.