Silversea Silver Wind is making a grand tour of the Balearics: three of the five major islands. We start with Ibiza, the principal town on the island of the same name. 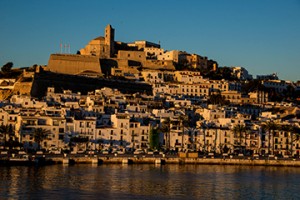 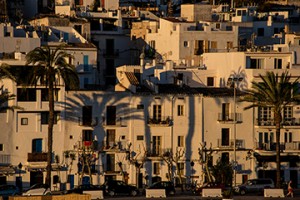 The Balearic Islands sit offshore of Spain, very attractive in many ways:

Safe harbors, on the ancient trading routes for long-vanished peoples, as well as for wave upon wave of empire builders including the Carthaginians, the Romans, the Byzantines, the Vikings, the Spanish, and the English.

And then right along the watery highway for incoming Islamic tribes, and then for outgoing Crusaders.

And today, close enough for invading holiday makers to hop on a ferry or a flight from the mainland to the beach. 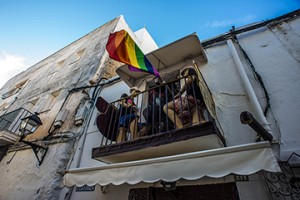 They party hearty in Ibiza, deep into the night. We arrived on Sunday, the morning after the night before. Photo by Corey Sandler

In the 16th and 17th centuries—under the Habsburg Dynasty—the Spanish Empire was the world’s greatest power. It held dominion over Spain, the Low Countries of Europe, as well as parts of France, Germany, and Italy.

In Northern Africa, Spain held Morocco and the surrounding area. In the New World, Spain held Louisiana. The Viceroyalty of New Spain included Alta California and all of Mexico and Central America. Plus South America from Venezuela to Peru on the western half of the continent and the Falkland Islands on the eastern side.

In the Caribbean it held the significant islands of Puerto Rico, Hispaniola, and Cuba. 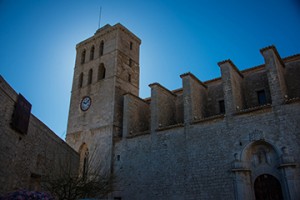 From 1580 to 1640, in dynastic union with Portugal, it included territories in Malta, Africa, India, the Middle East, Ceylon, and Brazil. A bit later on, the Spanish were as far north as Vancouver and the panhandle of Alaska.

From the mainland of Spain at Porto Denia to Ibiza, it is about 75 miles or 120km. On some summer weekends the Balearics seem like a suburb of Valencia…mixed in with jet-setters from around the world.

Ibiza is one of the two western “Pityuses” or “Pine Islands”, along with Formentera. The island’s largest cities are Ibiza Town; in Catalan called Vila d’Eivissa, or simply Vila, as well as Santa Eulària des Riu and Sant Antoni de Portmany. 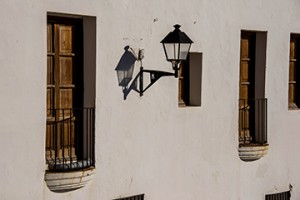 The morning light casts a shadow just outside the city walls. Photo by Corey Sandler

Modern Ibiza is very much a party town for the young. But it does have an ancient past.

In 654 BC, Phoenician settlers founded a port they called Ibossim. The Phoenicians—great traders and travelers—had adopted an Egyptian deity, the god of music and dance Bes. The Romans later adjusted the name to “Ebusus.” Ibiza next came under control of Carthage. By 400 BC, Ibiza was a major trader in the Mediterranean with outposts on the nearby, larger Balearic island of Majorca.

It also supplied some fierce mercenaries who fought for Carthage. Ibiza became part of the Roman Empire but was far enough away from Rome that it was mostly left alone. But after the fall of the Roman empire—and brief rule by the Vandals and then the Byzantines, the island was conquered by the oncoming Islamic tide. 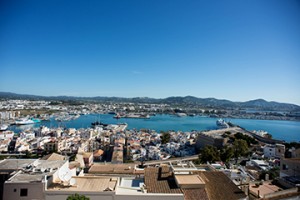 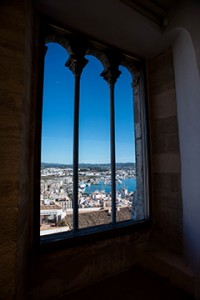 The view from above, with the walls. Silver Wind was at the dock at lower right. Photos by Corey Sandler

The Moors were on their way to taking Andalusia and much of the Iberian peninsula.

The pushback against the Muslims occurred in many places in many forms. Ibiza, Formentera, and Menorca were invaded by Norwegian king Sigurd I in the spring of 1110 on his crusade to Jerusalem.

Sigurd I was not a minor player: before clearing Ibiza he had conquered Lisbon and returned it to Christian rule.

The island was next conquered by the Roman Catholic King James I of Aragon in 1235.

This was still two-and-a-half centuries before the rise of Spain as a global power in 1492.

Ibiza has been a Spanish possession ever since. 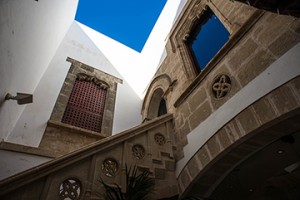 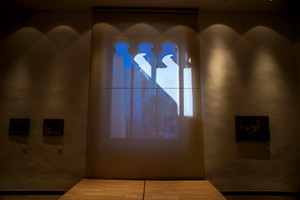 Within the Museum collection of artist Narcissa Puget Viñas in the old city. Born in Ibiza in 1874, he was an important though lesser-known impressionist. Among his favorite subjects the ancient alleys of the old city of Ibiza. Photos by Corey Sandler

As I said, today Ibiza is party central for many Spaniards and Europeans. The Spanish have been trying for years to make the claim that Ibiza is not just beaches, bars, and bikinis.

Not very successfully. Some call the place, “Gomorrah of the Med.”

If you ask someone about the principal attractions of Ibiza, you’re not likely to hear about great museums, cathedrals, and historical sites.

You are much more likely to hear about Paradis, Amnesia, Privilege, DC-10 and other clubs presenting live acts or DJs featuring techno or dance music.

The peak Gomorrah season runs from about June through September, so we’re a bit early.

In the late 1960s and 70s, Ibiza was considered at the forefront of high fashion.

Today, not so much, although shopping is still a major sporting activity. 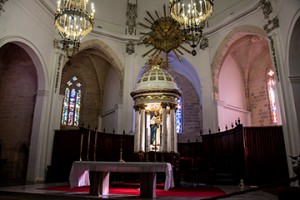 Inside the Cathedral of Ibiza. Photo by Corey Sandler

In Sant Antoni de Portmany on the Western coast you can visit a monument called “The Egg.” It was erected in the 1990s in honor of Christopher Columbus.

And thus Ibiza joins the non-exclusive club of places purporting to be his birthplace: Genoa, Corsica, and Sant Antoni among them.

But if he did come here, I’m sure there would be a party in his honor. 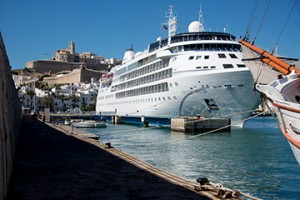 Silver Wind at the dock in Ibiza. Photo by Corey Sandler.

ALL TEXT AND PHOTOS COPYRIGHT BY COREY SANDLER AND MAY NOT BE COPIED OR OTHERWISE USED WITHOUT PERMISSION. If you would like to purchase a copy of a photo, please contact the author.