Both are conducive, I suppose, to great art, and it was here that Pablo Picasso was born and it is here that members of his family contributed pieces—some well-known and others quite obscure—to a museum.[whohit]-1APR2014 MALAGA-[/whohit]

Málaga is the capital of the Costa del Sol, the Sun Coast. 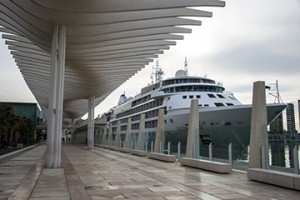 The modern terminal at Malaga frames the handsome city on the hill. Photos by Corey Sandler 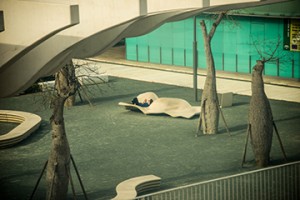 Siesta time along the promenade in Malaga. Photo by Corey Sandler

That seems to be a well-deserved nickname: the coast averages about 324 days of sunshine each year, which means we have about a 90 percent chance of sol.

The Costa del Sol is more or less a linear town, stretching from Málaga to Cadiz.

A few blocks inland from the beach is Málaga’s bullring, La Malagueta, built in 1874. It’s a hexa-dec-agon, a building with sixteen sides. 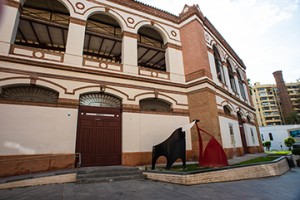 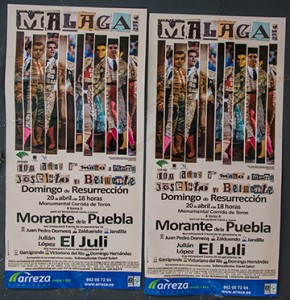 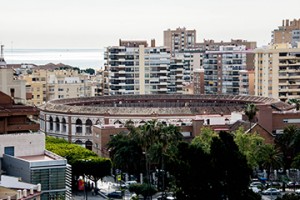 The bull ring in Malaga, in preparation for a major contest during Holy Week. Photos by Corey Sandler

Some of Spain’s most famous bullfighters have appeared here, including El Cordobés and Manolete. Spanish-style bullfighting usually ends with the killing of the bull in the ring.

Above the bullring in Malaga is the Alcazaba, a Moorish fortification from the 8th to the 11th century. Alcazaba comes from the Arabic al-qasbah, meaning the citadel, and this is the best-preserved example in Spain. 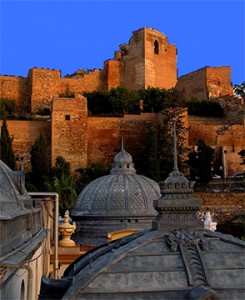 The Alcazaba of Malaga. Photo by Corey Sandler

Next to the entrance to the Alcazaba are the partially restored ruins of a 2nd century Roman theater. Some of the Roman materials were used in the construction of the Alcazaba. There are two walled enclosures, originally connected to the city’s ramparts, creating a third defensive wall. 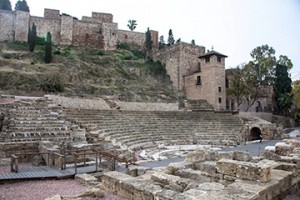 The Roman amphitheatre of Malaga. Photo by Corey Sandler

I mentioned Málaga was the birthplace of Pablo Picasso in 1881, and he is much celebrated here, even though he left town at the age of ten.

The Museo Picasso Málaga is in the old quarter at the foot of Gibralfaro hill, near the Alcazaba and the Roman Theatre.

Picasso once said that he was the world’s greatest collector of Picassos. His family had a few, as well, forming the original core of the museum.

The collection ranges from early academic studies to cubism to his late re-workings of Old Masters.

The museum is in the Palacio de Buenavista, originally built in the 16th century incorporating the remains of a palace from the Nasrid dynasty, the last Arab and Muslim dynasty in Spain. 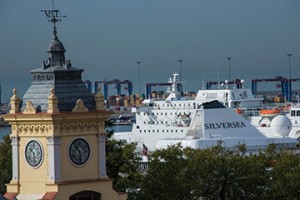 Silver Wind seen from above in Malaga. Photo by Corey Sandler

About an hour west of Málaga in the inland hills is Ronda. Ronda was first settled by the early Celts, but what you see today is the result of later Roman and Moorish rulers. Catholic Spain took control of the town in 1485, during the Reconquista.

The Guadalevín River bisects the city with the steep El Tajo gorge. Three bridges cross El Tajo: the Roman, the Old, and the New.

All of them are old. 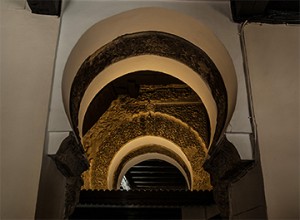 The Arab baths at Ronda. Photo by Corey Sandler

The Puente Romano (the Roman Bridge, also known as the Puente San Miguel), dates from Roman times at least one thousand years ago. The Puente Viejo (“Old Bridge”, also known as the Puente Arabe or “Arab Bridge”) is a mere four centuries old, built in 1616. The Puente Nuevo (New Bridge) was begun in 1751 and took until 1793 to complete. This is the tallest of the bridges, towering 390 feet or 120 meters above the canyon floor.

A chamber beneath the central arch was used as a prison. During the Spanish Civil War of 1936 to 1939, both sides were alleged to have used the chamber to torture prisoners, killing some by throwing them to the rocks below.

Ernest Hemingway spent many summers in Ronda’s old town quarter, La Ciudad. Hemingway’s For Whom the Bell Tolls describes the murder of Nationalist sympathizers early in the Spanish Civil War. Some say Hemingway based the account on killings that took place at the cliffs of El Tajo.

Another frequent visitor was actor and director Orson Welles. About Ronda, Welles said, “A man is not from where he is born, but where he chooses to die.” Welles’ ashes were scattered in the Ronda bull-ring in 1985.

One of Spain’s most spectacular and famous cities is Granada, just under two hours to the northeast of Málaga.

Granada sits at the base of Sierra Nevada mountains, at the confluence of three rivers. The city has been inhabited for thousands of years. The original settlers were perhaps Ibero-Celtics. Then came Phoenicians, Carthagenians, and Greeks.

The heraldic symbol of Granada is the pomegranate: Granada in Spanish.

The city became the capital of a province of the Caliphate of Cordoba.

Although many Muslim buildings were destroyed by the Catholics, those that remain represent the most complete group of Moorish domestic architecture in Europe. 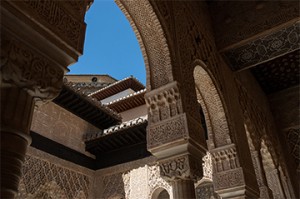 The Alhambra in Granada. Photo by Corey Sandler

It originally was the residence of the Muslim rulers of Granada and their court.

With the reconquest by the Spaniards, it became a Christian palace. Within the Alhambra, a new palace was erected in 1527 by Charles V, the Holy Roman Emperor.

After falling into disrepair, the Alhambra was “rediscovered” in the 19th century. It is now one of Spain’s major tourist attractions.

It exhibits the country’s most famous Islamic architecture, together with Christian 16th-century and later improvements.

Like a house that has been built, rebuilt, and expanded dozens of times over centuries, the Alhambra is a bit of an architectural mess.

That’s actually one of its charms.

The overall design is chaotic, with some rooms at odd angles to each other and styles abruptly changing at every turn.

Because the Muslims in the original settlement were isolated, the Islamic art here is classical

It does not include more recent styles that arose in the middle east and Africa.

The Alhambra’s westernmost feature is the alcazaba (the citadel).

The rest of the plateau is enclosed by a fortified wall, with thirteen towers, some defensive and some providing vistas for the inhabitants.

After the Christian conquest of the city in 1492, some of the art was covered with whitewash.

The Palacio de Generalife gets its unusual name from the Arabic: Jannat al-’Arif‎, meaning Architect’s Garden.

This was the summer palace and country estate of the Nasrid sultans of Granada. The palace and gardens were built between 1302 and 1324.

Within is the famous Court of Myrtles and the Patio of the Lions, like something out of Ali Baba.