Gibraltar is one of the planet’s odd corners, also one of the most recognizable pieces of geology: The Rock. 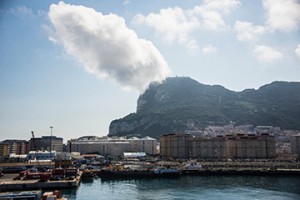 It has a quirky mix of cultures: a British territory clinging to the bottom of the Iberian Peninsula of Spain. To some eyes, the last remaining colony in Europe.[whohit]-31MAR2014 GIBRALTAR-[/whohit]

There a few other places of this sort, including Spain’s exclaves of Melilla and Ceuta on the Moroccan coast not far away. We’re headed to Melilla soon. 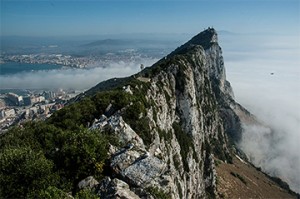 The Rock, from the rock next door. Photo by Corey Sandler

Scientists say about 5 million years ago the two continents were connected here. The Mediterranean Sea was more like a huge lake, and had evaporated into a deep basin much lower than the oceans.

The base of the rock is home to about 30,000 people, one of the world’s most densely populated cities. 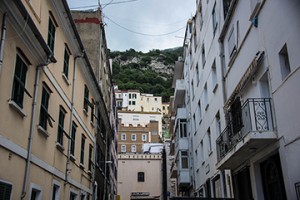 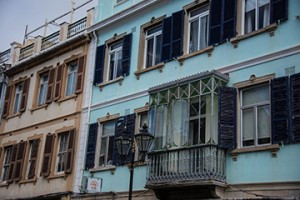 Streets and alleys at the base of the Rock in Gibraltar. Photos by Corey Sandler

In Greek mythology, Hercules had to perform 12 labors to please the gods. The tenth labor—the westernmost assignment—took place here.

Hercules had to cross the massive Atlas mountain in North Africa, on his way to the Garden of the Hesperides. Instead of climbing Atlas, Hercules smashed through it by tearing down a pair of mountainous pillars.

The two points marked the limit to the known world. By his action, Hercules opened the Strait of Gibraltar, connecting the Mediterranean to the Atlantic. 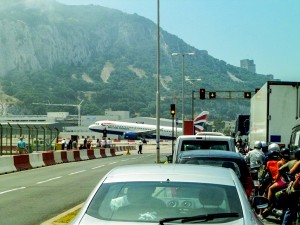 The extraordinarily strange airport at Gibraltar. Windston Churchill Avenue crosses the runway, and cars and other vehicles are stopped at a barrier to allow planes to land or take off. Photo by Corey Sandler

One of the pillars was Gibraltar. The other, in various versions, could have been Monte Hacho which overlooks the Spanish exclave of Ceuta in Morocco.

The other suspect: Jabal Musa (Mount Moses) in Morocco.

Where was Hesperides? Some place it in what is now Libya.

Others say the Garden of Hesperides was on Gran Canaria in the Canary Islands, where our voyage began.

It was across this gap that the Moors—the Muslim tribes—came across to Europe in 711, surrendering al-Andalus in 1491.

In 1501 Gibraltar passed back to the Spanish Crown: Ferdinand II of Aragon and Isabella I of Castile.

We jump forward to 1704, when Spain’s great empire was crumbling.

An Anglo-Dutch force captured Gibraltar during the War of the Spanish Succession.

And then it was made official—at least to the current satisfaction of the British. In 1713, Gibraltar was ceded to Britain by Spain under the Treaty of Utrecht.

Spain attempted to retake Gibraltar in 1727 and again in 1779, when it entered the American Revolutionary War on the American (or at least the anti-British) side as an ally of France.

Spain helped finance the American effort, and fought against the British in Spanish Louisiana and Central America.

The Franco-Spanish army was as large as 100,000, greatly outnumbering the British. But the British were able to hold out in the fortress. The Rock became an important base for the British Royal Navy. 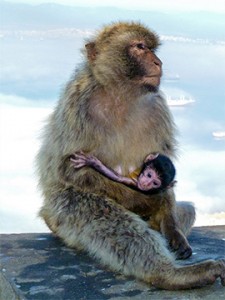 Notable residents of The Rock. Photo by Corey Sandler

It played a role in the Battle of Trafalgar, Nelson’s victory against the combined fleets of the French and Spanish in 1805.

Its strategic value increased with the opening of the Suez Canal in 1869 as it controlled the sea route between the UK and the British Empire east of Suez. 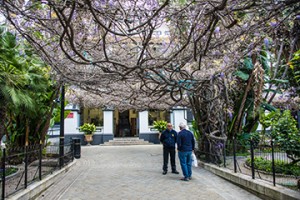 The Courts of Justice in Gibraltar. Photo by Corey Sandler

Spanish dictator Generalisimo Francisco Franco was no saint; not even close.

But he did not trust Hitler, a feeling that was mutual.

Franco’s reluctance to allow the German Army onto Spanish soil frustrated a German plan to capture The Rock.

The detailed plan for Operation Felix was ready to go, but on March 10, 1941 Hitler instead launched Operation Barbarossa—the invasion of its one-time ally the Soviet Union.

Although it was bombed several times and suffered other privations, the Rock came through the War relatively unscathed.

Inside the Rock of Gibraltar, miles of tunnels were excavated from the limestone. By some measures, there are more miles of road within the Rock than outside.

All photos copyright 2014 by Corey Sandler. If you would like to purchase a copy, please contact the author.