Shipping Out of Boston…Side-stepping a Storm

We spent a rainy Sunday in Boston. Speaking for myself, I’ll take a gray day in Beantown over sun and blue skies almost anywhere else.

Boston is one of America’s liveliest and culturally vibrant cities. And the religious fervor is uplifting: the Red Sox are in the playoffs and all is well with the world.

In early evening, we shipped out of Boston, heading for a call at Oak Bluffs in Martha’s Vineyard.

Let’s consider a ship coming out of Boston and wanting to go here, to New York.

You could go out to sea around Cape Cod.

Another route—not ordinarily a wise decision for a large ship—is to sail between Cape Cod and the islands of Nantucket and Martha’s Vineyard.

There is a passage, but it is very tricky and in places very pretty shallow.

Just ask the former master of the QE2, who almost lost his ship—and did lose his command—when he tried that in 1992. 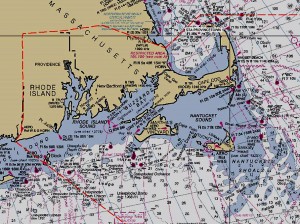 Shoals, Wrecks, and Other Threats around Cape Cod and the Islands

The hook of Cape Cod is like a giant’s raised right arm. Near its fist toward the northwest, is Provincetown.

If you didn’t know Cape Cod was there, or if your ship was being blown south in a howling nor’easter you could easily end up wrecked on the inside of the arm.

Mariners have also known about the Nantucket Shoals for more than four hundred years.

East and south of Nantucket the sea is pretty treacherous. 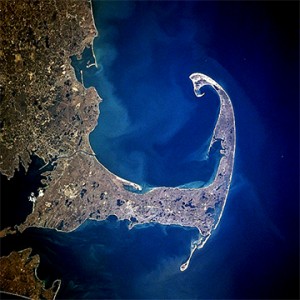 The Hook of Cape Cod

So for the past few centuries, large ships have dropped down below Cape Cod and sail to the south of Nantucket.

But even that has its challenges. Nantucket is nearly surrounded by shoals and other obstructions: rocks and remnants of nearly forgotten naval encounters of World War I and II.

Since 1914, if your ship is of the right side, there has been an alternative: the Cape Cod Canal.

Using the canal saves between 135 and 166 miles, eliminating about seven to ten hours of sailing through dangerous waters.

The man with the plan (and the money) was August Belmont, Jr. And the plan used by The Boston, Cape Cod and New York Canal Company was drawn by engineer William Barclay Parsons.

As a consultant to the Panama Canal Commission, Parsons had recommended a sea-level canal across Nicaragua, but Teddy Roosevelt disagreed.

As chief engineer of the New York Rapid Transit Commission, he had overseen the construction of Belmont’s I-R-T subway line.

In the borough of Queens, he is memorialized with Parsons Boulevard.

And the firm he founded, now called Parsons Brinckerhoff, is today one of the largest American civil engineering firms.

Construction of the canal turned out to be much more difficult than merely digging a channel.

In Panama, the French and then the Americans had to work in tremendous heat and torrential downpours. They dug through swamps filled with mosquitoes carrying malaria and Yellow Fever, crossed treacherous fast-flowing rivers, and blasted through the mountainous spine of Central America.

In Cape Cod, the problems included mammoth boulders left behind by Ice Age glaciers, and the cold New England climate which made it impossible to dredge or dig in winter.

Cape Cod and Nantucket are terminal moraines of the Laurentide Ice Sheet of about 20,000 years ago. 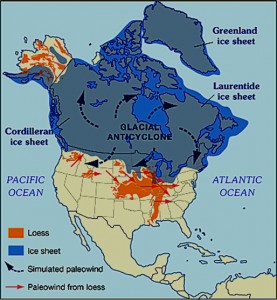 The huge rocks came down from the Canadian Shield.

Though Nantucket is mostly sand, if you look around the moors and even in town you’ll find some fairly substantial boulders.

There’s one in my neighbor’s front yard. It’s a gift from Canada.

Belmont had managed to open seventeen days before the Panama Canal.

The canal was taken over by the U.S. Army Corps of Engineers during the Depression and widened and deepened. Three new bridges were built over the channel.

Each year, more than 35 million vehicles pass over the two highway bridges, which provide the only land link between Cape Cod and the mainland of Massachusetts.

Every time I use one of the bridges I remind myself they were built by the lowest bidder.

And I also enjoy four lanes of two-way traffic without a center barrier. 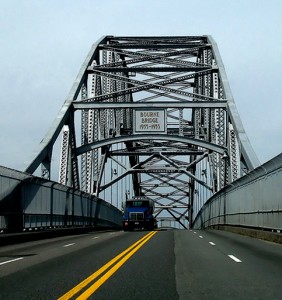 The Bourne Bridge over the Cape Cod Canal.

We’re 135 feet above the water, driving in traffic lanes less than ten feet wide; a semi-tractor trailer is eight-foot-six-inches wide.

The maximum length for vessels is 825 feet.

More importantly, ships have to be able to fit beneath the three bridges, 135-feet above mean tide.

Bottom line: An aircraft carrier or a monster megaship like the ridiculously supersized Oasis of the Seas and Allure of the Seas that carry 6,000 passengers and 3,000 crew within their welded steel hulls are too long, draw too much water, and most importantly too tall to squeeze below the bridges. 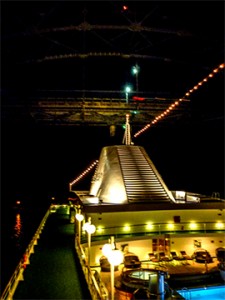 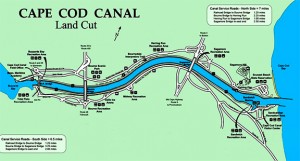 Well, we made it through the canal, and arrived offshore of Oak Bluffs early Monday morning. But our string of good luck with the weather—something that began in the Maritimes of Canada more than a week ago—came to an end.

A significant gale was on the horizon, with high winds and seas. And so, Captain Luigi Rutigliano hauled anchor and we scurried out of Massachusetts and headed for an evening arrival in New York City.

A few hours after we left, my cell phone began chiming with messages about the cancellation of ferry boats to Martha’s Vineyard and Nantucket where we live. So we side-stepped the storm.

All text by Corey Sandler. Copyright 2013. If you would like to purchase a photo, please contact me.