The history of Bar Harbor, Maine is bound up in the glorious greensward now known as Acadia National Park.

It’s a great place to visit, especially if you are lucky enough to be there in good weather with the fall colors in full display.

Well, we had the weather and we had the colors, but we did not have the park.

Because of the shutdown of the federal government (See Mark Twain, above), the park was closed.

There were three cruise ships in the harbor: two small vessels including Silver Whisper and one ugly megaship.

The streets were jammed. The ice cream and taffy stands busy. And the park closed.

The town of Bar Harbor is quite small, with a permanent population of about 5,000.

Of course, that population swells greatly in the summer and fall. 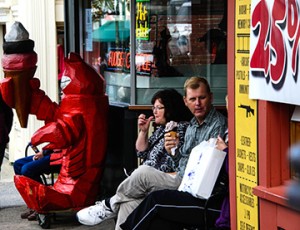 At the back of the harbor is the bar, a stretch of sand and gravel that is covered at high tide but visible and often walkable at low tide across to Bar Island.

It can cause a bit of inconvenience if you’ve gone out on the bar and the tide comes in behind you to cover your escape route. 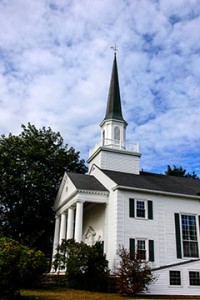 That makes it the sixth largest island in the continental United States, and the second largest on the east coast of the United States—behind Long Island in New York and ahead of Martha’s Vineyard in Massachusetts.

Even without the park, it’s a pretty place, especially if you go past the t-shirt shops and into the old town. 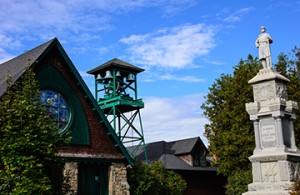 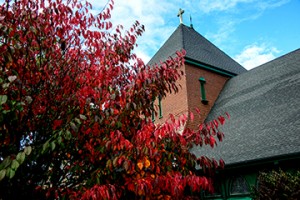 Bar Harbor. In the churchyard is a memorial to the sons of Eden (the town’s original name) who died in the U.S. Civil War. Photos by Corey Sandler

We come back to Bar Harbor on Silver Whisper in about three weeks. We hope the park is open, Congress is shut, and the leaves still red and gold.