Baie-Comeau is on the Côte-Nord, or north bank of the Saint Lawrence, near the mouth of the Manicouagan River.[whohit]-Baie Comeau-[/whohit]

Baie-Comeau was a company town that essentially grew out of a single man’s investment and homestead.

And he wasn’t even a Canadian.

Robert Rutherford McCormick rose through the family business to become owner and publisher of the Chicago Tribune newspaper.

He was one of those publishers who felt that his newspaper was his personal megaphone.

A conservative Republican, he was a fierce opponent of Franklin D. Roosevelt and the New Deal. Also Democrats in general, liberal Republicans, easterners, the World Court, the League of Nations, and later the United Nations. Oh, and also he intensely disliked the British Empire.

He was an America First isolationist who strongly opposed entering World War II and supporting Britain.

So what was he doing in the Dominion of Canada, part of the British Empire until 1982?

Why, he was using the abundant water resources of Quebec and what seemed like an unending supply of soft wood trees to construct a paper mill and a hydroelectric power plant to operate it.

He established the town of Baie-Comeau in 1936. 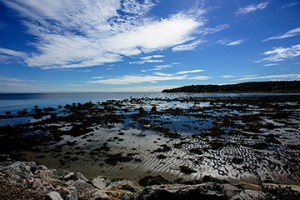 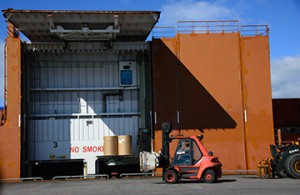 Newsprint is loaded onto a huge special-purpose ship in Baie-Comeau. Photo by Corey Sandler

He modestly named the structure holding back the Manicouagan river the McCormick Dam.

The dam thing is still there, just 3 kilometers or 2 miles west of town.

Hydro Quebec, the provincial power giant, owns and operates dozens of huge power plants in Quebec; I’ve been 1,200 miles north of Montreal to the La Grande complex at Radisson on Hudson Strait. 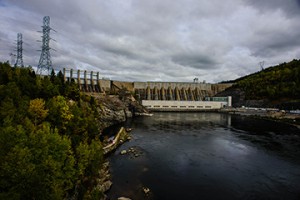 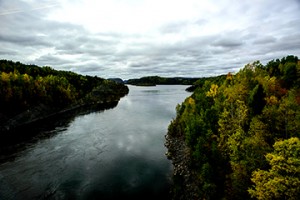 Here on the Saint Lawrence River, the Manic-2 plant was completed in 1967.

The eight turbines together produce about 1.145 Gigawatts of power, which is in the range of a large nuclear power plant—without the nuclear reactor.

The tour is, shall say, electric. Especially when you are able to enter into one of the turbine and generator rooms and are able to feel the power of the onrushing water and see the huge rotor spinning within the stator.

Alas, photos were not permitted because of someone’s idea that allowing them would threaten the dam security. It almost killed me to walk around the dam without my cameras. 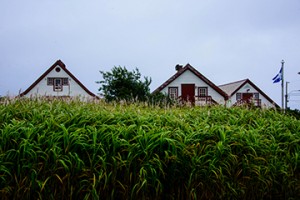 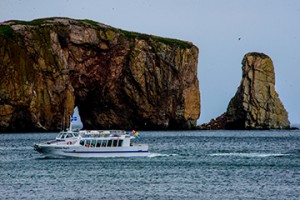 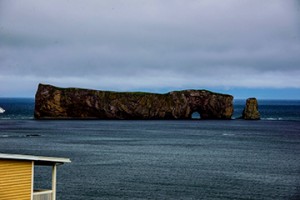