As I write this, we are sailing through the Kiel Canal, exiting the Baltic Sea and heading for the North Sea. About 3 p.m. tomorrow, July 16, we will enter into the outer reaches of the River Thames and then make a stately procession to London.

The London Tower Bridge is scheduled to open for us about 8 p.m. and we will pass through the great landmark and then tie up to the historic HMS Belfast for the end of this voyage.

It’s been quite a journey. This cruise began July 6 in Copenhagen and also included two other bright and lively Scandinavian cities: Helsinki and Stockholm. Silver Cloud also took us to Saint Petersburg, which is lively and exciting in the unique Russian way. The city includes some of the most spectacular palaces and museums in the world, in a place that has seen all possible extremes of wealth, poverty, siege, war, the rise and fall of the Soviet Communists, and the rise of Vladimir Putin and modern Russia.

It may take a while before we understand whether Putin is a democrat or a would-be dictator in the Soviet or Czarist mold. Speaking for myself, I think Putin sees his model not in Stalin but in Peter the Great. That may not be great.

We also visited the beautiful bucolic island of Gotland, the home of the medieval city of Visby. And then our final port of call, before our exit from the Baltic through the Kiel Canal and our upcoming trip up the Thames, took us to Warnemünde, the beach resort at the mouth of the Warnow River.

I wrote about Warnemünde and the nearby larger city of Rostock in my blog entry of June 17, when we came here on our way into the Baltic. On this visit, I went in a different direction, to the fairy tale castle at Schwerin, about 90 minutes away. 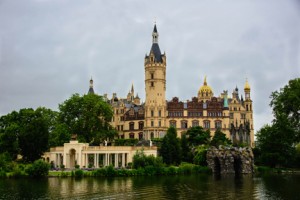 Schwerin Castle. I used a bit of computer magic to paint the colors like an old Photochrome postcard 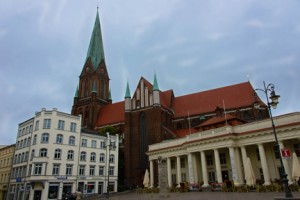 Schwerin’s Lutheran Church towers over the town. It dates back to about 1158 as a Catholic Church, and progressed through the Reformation to its current design 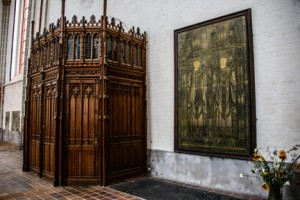 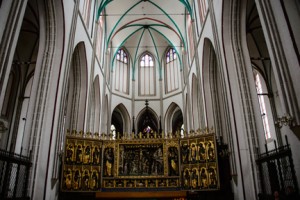 Schwerin’s history, in castle terms, dates to at least the year 973. For centuries it was the home of the dukes and grand dukes of Mecklenburg and later Mecklenburg-Schwerin. The castle as it stands now dates as far back as the 15th century. Many updates and changes have been made over the years, but it is still an ancient place within and without. The final look of the castle includes some 19th century touches. 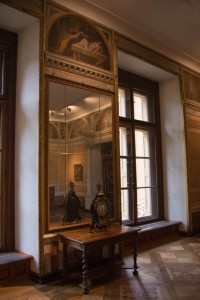 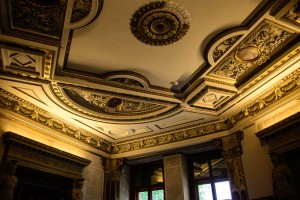 Why is this called a fairy tale castle? Just take a look at fables and stories from across Europe: you’re likely to find some form of Schwerin or another famed palace, Neuschwanstein Castle in Bavaria. It just seems to fit the description nicely.

And then there was Walt Disney. He began as an artist, and spent time studying in Europe as a young man; for a while he was working in Èze, near Nice in France. When Disney came home to California and launched his moviemaking company, one thing led to another and we ended up with Disneyland and Sleeping Beauty Castle.

We toured Schwerin Castle, which had some beautiful and rich public rooms. About half of the place is open to the public; the other half is used by the regional parliament. 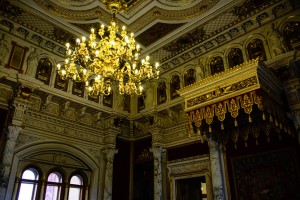 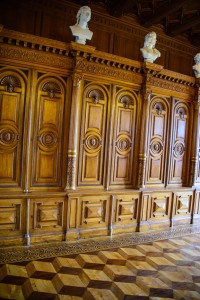 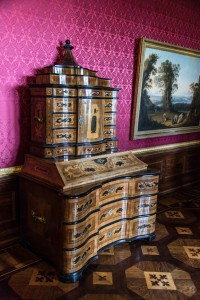 But what really caught my eye was this most unusual piece of statuary on the town square of Schwerin. One side depicts the bloody assault of Henry the Lion, who was Duke of Saxony and Duke of Bavaria in the mid-12th century. 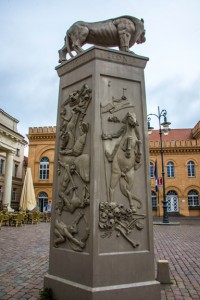 The violent face of the monument

Let’s just say he was not much loved. The other side of the sculpture shows people—how should I put this?—expressing their extreme lack of respect for him. The sculpture, a modern work from post-reunification Germany, shows rows of men and women mooning him. I bet you thought that was a modern form of political expression.