The beautiful Silver Cloud arrived in Murmansk on schedule in early morning; several hours later–presumably after they had finished drinking coffee and eating cakes and running their rubber stamps dry–the local bureaucrats cleared our ship. It was a first indication of a place frozen in time.

Why is there a city of 300,000 people at 68 degrees 58 minutes north latitude, about 2 degrees within the Arctic Circle?

It is in fact the largest city within the Arctic Circle. (Reykjavik in Iceland is just outside the circle, and about half as large.)

Murmansk is a cold, lonely place dark for months in the polar winter and disturbingly bright in the summer of the midnight sun.

This is truly one of the corners of the world, specifically Russia’s northwest crook, not far from the border with Norway and Finland.

Remote as it is, it is also a place where you can get some sense of the size of our planet. As far north as it is, Murmansk is only about halfway between Moscow and the North Pole and there are still about 1,458 cold miles to the Geographic North Pole.

The last time the sun set in Murmansk was at 2 a.m. local time on May 21. Seven minutes later the sun rose and it has been above the horizon ever since.

The next expected sunset is at 1:25 in the morning on July 23 and locals plan on partying all night long…until the sun rises again at 2:11. 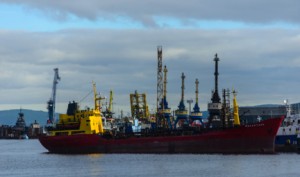 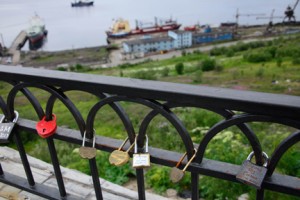 Love Locks installed on a railing above the port.

So why a city at the icy cold top of Russia?

There is a magnificent port on an inlet that extends about 12 kilometers or 7 miles inland. There are many inlets like this in and around the Kola and White seas, but most of them freeze solid for several months in the long, dark winter.

What is different about Murmansk is that just offshore is a tongue of the North Atlantic Drift Current. That undersea river is the far northern reach of the Gulf Stream, which comes up from South America, along the Northeast coast of the United States and Canada and ultimately peters out near Murmansk.

That stream keeps the port of Murmansk nearly free of ice all year round. And that made it a great asset in the north.

CONVOYS TO THE NORTH

Murmansk was the last city founded in the Russian Empire. In 1915—during World War I—Russia needed an ice-free port in the Arctic to receive military supplies from its allies.

And so in 1915, a railroad was built from Karelia, east of Saint Petersburg.

From 1918 to 1920, during the Russian Civil War, the town was occupied by the Western powers as well as the forces of the White Army.

In World War II, after the Germans broke their tenuous non-aggression pact with the Soviet Union nd declared war in June 1941, Murmansk became an early target.

Operation Silver Fox, officially a join effort of the Germans and Finns, was aimed at the capture of the key Soviet port. Murmansk suffered extensive destruction, rivaled only by the destruction of Leningrad (Saint Petersburg) and Stalingrad (Volgograd).

However, fierce Soviet resistance and harsh local weather conditions prevented the Germans from capturing the city.

Today, the fighting around Murmansk is remembered by a monumental monument of a soldier in a greatcoat.

He is known locally as Alyosha—the diminutive of the name Alexei—and he stands 36 meters or 116 feet atop a hill in the city, visible from almost everywhere. He faces west, toward the Valley of Glory, where the fiercest fighting of the Arctic Campaign occurred when the German invaders were turned back. 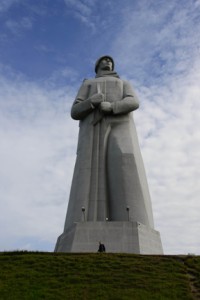 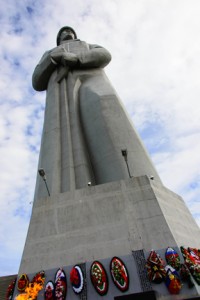 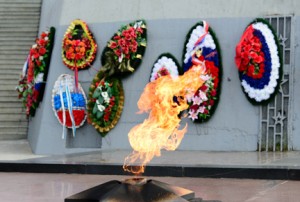 Once the Russians had managed to beat back the German advance, the port was open for business as one of the principal reception centers for supplies from the Allies.

Arctic convoys sailed from the United Kingdom, Iceland, and North America to northern ports in the Soviet Union, primarily Arkhangelsk (Archangel) and Murmansk.

The challenges were immense: fierce opposition by German naval, submarine, and air forces including those operating from occupied Norway, very rough seas, heavy fog, and ice. A convoy set off each month, except in the summer when the lack of darkness made them very vulnerable to attack.

Sailing around the northern tip of Norway, the convoys were exposed to one of the largest concentrations of German U-boats, surface raiders and aircraft anywhere in the world.

Strict orders forbade the halting of any ship for even a moment for fear of being attacked by prowling German U-boats. A ship which suffered a mechanical breakdown or a sailor who fell overboard were left behind.

Between August 1941 and the end of the war, 78 convoys made the perilous journey to and from north Russia, carrying four million tons of supplies for use by Soviet forces fighting against the German Army on the Eastern Front.

Amongst those who made the trip was my wife’s father Daniel Keefe, who came from upstate New York to North Atlantic and ten convoy crossings.

The last surviving British warship from the Arctic Convoys is HMS Belfast, now moored on the Thames opposite the Tower of London.

During the Cold War, Murmansk was a center of Soviet submarine and icebreaker activity.

After the breakup of the Soviet Union, the nearby city and naval base of Severomorsk became the headquarters of the Russian Northern Fleet; it is still somewhat of a closed city to outsiders.

The Northern Fleet was in very poor condition. Many of its nuclear ships were scuttled or beached on the Russian island of Novaya Zemlya, which still serves as a radioactive graveyard.

Not far from Alyosha are three other monuments that between them tell the story of Murmansk pretty well.

First is the Russian Orthodox Church, the Saviour on the Waters. Although it is a modern, post-Soviet structure, within are some very old and impressive icons and decorations.

The church is meant to commemorate the risks and travails of those who went to sea. 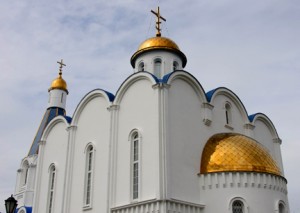 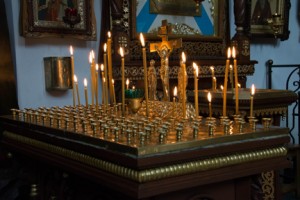 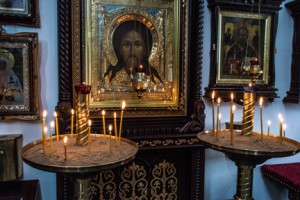 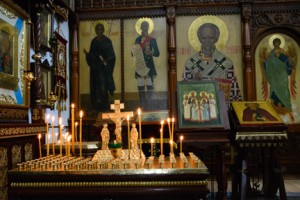 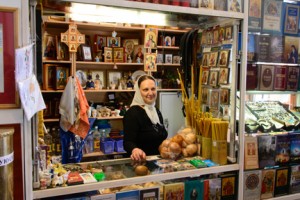 Down the hill from the church is another recent construction,  a small lighthouse that is meant as a symbolic remembrance of those who were lost at sea. Inside are plaques and a book of remembrances that is said to include the names of all ships that were lost from the port of Murmansk since its founding. There are many gaps; few believe the list to be anywhere near complete.

And then, just outside the lighthouse, is the recovered remains of the conning tower of the great submarine Kursk. The nuclear-powered cruise missile submarine sank in the Barents Sea in August of 2000.

Though the British and Norwegians offered to assist in rescue, Russia declined their help. All 118 sailors and officers aboard Kursk perished. The Russian Admiralty at first suggested most of the crew died within minutes of the explosion; however, some of the sailors had time to write notes.

Parts of the sub were eventually raised and most of the bodies recovered. 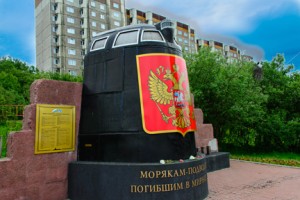 The recovered conning tower of the submarine Kursk

But the Kursk remains as one of modern Russia’s inglorious naval moments, not one that its leaders choose to much discuss.

Above the port, within sight of Alyosha and the church and the city is one more monument: a statue of Sergei Kirov.

Kirov was a close friend of both Lenin and Stalin, and rose to head the Communist Party of Leningrad. He was assassinated in 1934 at his office at the Smolny Institute in Leningrad (today’s Saint Petersburg.) 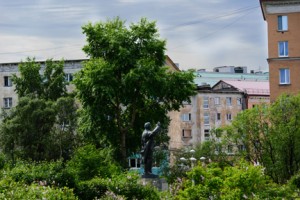 The case was never solved, although here are some of the threads we can pull at: He had apparently fallen out of favor with Stalin. Stalin had reduced the number of bodyguards who were assignbed to protect him. Stalin remains at the top of the list of suspects.

This much is also true: Stalin used Kirov’s death as one of the pretexts for the repression of dissident elements of the Party, culminating in the Great Purge of the late 1930s. In that purge,  many of the Old Bolsheviks were arrested, expelled from the Party, and executed. Perhaps the most common charge brought against those who were involved in “show trials” was complicity in Kirov’s assassination.

Notwithstanding Stalin’s probable involvement, a monument was erected in Murmansk, and the Mariinski Theatre in Saint Petersburg was named in Kirov’s honor: both acts at the direction of Stalin.

Circling the city are some spectacularly ugly Soviet-era housing blocks; beyond them are mostly featureless tundra. 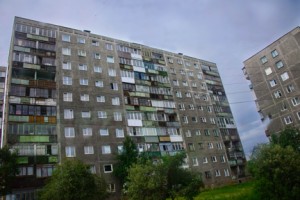 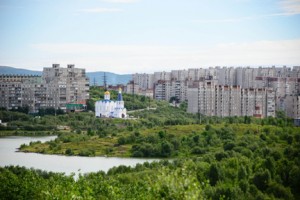 The apartments are a depressing reminder of times past. Today most of the occupants “own” their apartment, but not the building or the land beneath.

Here the North Atlantic Drift has not thawed much. 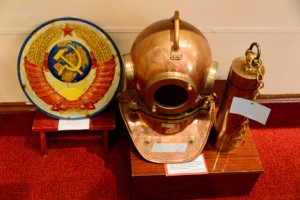 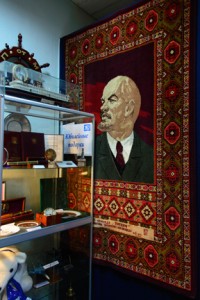 All text and photos are Copyright 2013, Corey Sandler. If you’d like a copy of a photo, please visit the Obtain a Photo tab of this blog.