Honningsvåg is the northernmost city on the mainland of Norway.

There are a few gotchas in that description. Mainland, not on an island.

A city, not a town or village or settlement.

That said, Honningsvag has only about 2,436 inhabitants which is below the Norwegian definition of a city as a place with at least 5,000 residents.

But its status as a city was grandfathered in place.

A CAPTAIN EARNS HIS PAY

We arrived to face a stiff wind coming out of the north, and blowing across the dock where Silver Cloud was due to tie up.

It took us three tries, the last one with the help of a boat that came out from shore to take our lines and pull them to mooring points in the harbor. We winched ourselves alongside.

There are times when a ship’s captain earns his keep in ways other than shaking hands at a formal reception line; this was one of those days.

Honningsvåg is within a bay on the southeastern side of the large island of Magerøya. That name speaks volumes about the fruitfulness of the land: it means “meager.”

All that seems to grow on Magerøya is lichen, huge numbers of fish, reindeer (only when they visit on summer vacation), and cloudberries.

I’ll pass on the lichen, but I have tried reindeer (and caribou, the same creature) and I’m sorry to report that Rudolph is rather tasty. It reminds me of a mix between beef and calf’s liver.

Cloudberries, which grow only at very high latitudes—in places like Norway and Scotland—are delicious, delicate fruit and very high in Vitamin C. 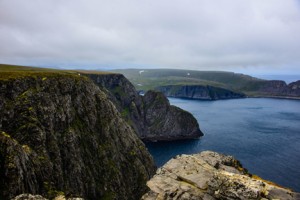 Searching for a northeast passage to India in 1553, British navigator Richard Chancellor came upon a crag 1,007 feet (307 meters) above the Barents Sea.

The Norwegians would later adjust that to Nordkapp.

It certainly is far north, but first of all, it is not the North Pole, and secondly it is not actually the farthest north piece of land in Europe.

The neighboring Knivskjellodden Point, just to the west, extends about a mile further north.

It’s a lot harder to get to, though, and so the more convenient North Cape gets the glory. And the visitor’s center, gift shop, and restaurant. The northernmost gift shop in Europe, of course.

But actually, since both of these points are situated on an island, some purists will maintain that neither is on the mainland of Europe. Instead they point to Cape Nordkinn (Kinnarodden)  about 70 kilometers or 43 miles to the east. It’s not quite as far north, but it is on the mainland. 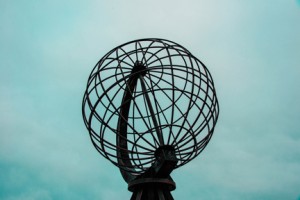 The marker at North Cape, near the gift shop

And just to put things in perspective, the steep cliff of North Cape at 71 degrees 10 minutes North latitude is about 2,102 kilometers or 1,306 miles from the geographic North Pole.

In any case, the North Cape on the northern side of Magerøya island, is a dramatic place, a rite of passage for many visitors to the far north.

The drive from Honningsvåg—a city in name alone—is about a 40-minute trip across a slightly green moon-like landscape that is mostly empty. There are not that many settled places in the world above 71 degrees North, and the geography shows why.

In Finnmark County at the top of Norway, an area about the size of Switzerland, there are about 1.5 humans per square kilometer; reindeer outnumber people two-to-one.

All through this region of Norway, and then across the border into Finland, are the Sami people.

They are also known in some languages as Lap or Laplanders, although modern Sami may reject that term.

Traditionally, the Sami have pursued a variety of livelihoods, including coastal fishing, fur trapping, and sheep herding.

Since prehistoric times, the Sami people of Arctic Europe lived and worked in an area that stretches over parts of what is now northern Norway, Sweden, Finland and the Russian Kola Peninsula.

On our way to the North Cape we visited the remote home of a Sami couple. The man, who spoke little Norwegian and no English, posed with one of his favorite reindeer. His wife worked inside at the gift shop counter.

Changes in latitude, changes in attitude. 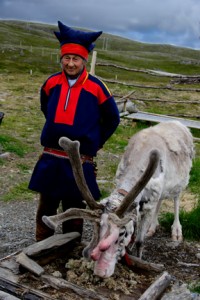 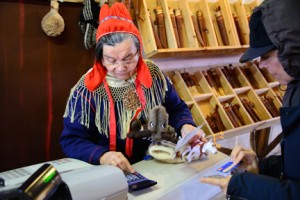 Text and photos copyright 2013 by Corey Sandler. If you would like to obtain a copy of a photo from this blog, please visit the tab Order a Photo.