Greetings from the Land of the Midnight Sun.

Also the 3 a.m. sun and the noontime sun and cocktail hour sun.

This is also one of the best places in the world to experience the Aurora Borealis.

Except, of course, when the light is on all day. Midnight Sun means the Northern Lights are out of sight.

That doesn’t mean the sky is always blue. We have been in and out of the mists and rain for the past few days as we headed north up the west coast of Norway.

But this morning—morning by the clock—dawned bright and sunny and we happily headed into town. 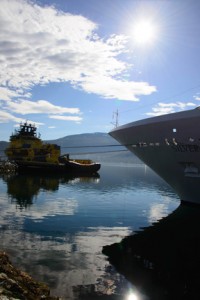 Silver Cloud at the dock, along with an ocean-going tug

Even though at one time this small settlement did lay claim to the nickname of “The Paris of the North.”

Tromsø has very much the feel of a place near the end of the world. The shops and houses are painted in brilliant hues and modern structures feature mirrored glass to extend the views all around. 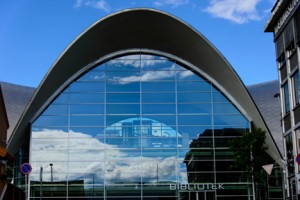 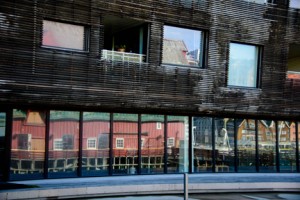 It has a lot more color and liveliness than Murmansk and Arkhangelsk, which lie ahead of us on our journey.

Most of Tromsø is located on the small island of Tromsøya, 350 kilometers or 217 miles north of the Arctic Circle, at 69 degrees 40 minutes north.

Among its civic claims to fame: the world’s northernmost university, botanical garden, cathedral, and most importantly, the northernmost brewery in the world.

Despite only being home to around 80 people, Tromsø was issued its city charter in 1794 by King Christian VII. The city quickly rose in importance with trading, fishing, churches, and a bit of culture.

Arctic hunting, from Novaya Zemlya to Canada, started up around 1820. By 1850, Tromsø was the major center of Arctic hunting, and the city was trading from Arkhangelsk to Bordeaux. 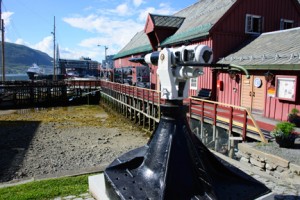 It was at this time that the small settlement bestowed upon itself the nickname “Paris of the North.”

The Macks Brewery was opened in 1877, and still maintains a presence. 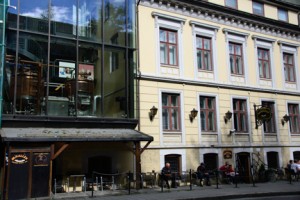 Macks Brewery, the northernmost brewery in the world, or so they say

By the end of the 19th century, Tromsø had become a major Arctic trade center from which many Arctic expeditions originated.

Explorers like Roald Amundsen, Umberto Nobile, and Fridtjof Nansen made use of the know-how in Tromsø on Arctic conditions, and often recruited their crew in the city.

It was in Trondheim, about 100 miles from Tromsø, that the Germans parked their prize battleship Tirpitz during World War II.

By the end of the intense cat-and-mouse game in the North, the Tirpitz had been moved to a cove right outside of Tromsø, and it was there the battleship was finally sunk.

We enjoyed our morning in the sun, even when it began raining again. Later in the all-day morning, about 2 pm, blue skies returned.

In town, as we usually do, we visited a supermarket to learn about the real way of life in a foreign port. There we saw some things we expected–like whale meat–but one thing that caught us by surprise.

At the seafood counter was a basket of extra- extra-large brown speckled eggs, about two- to three-times the size of chicken eggs. They were, we learned, from seagulls. The price, about $4 each.

This is a great delicacy in northern Norway, despite the fact that here–like many places around the world–seagulls are referred to as “flying rats.” They are said to have a mild flavor, usually boiled and served on a piece of flatbread with melted butter atop them. (I can’t help imagining they actually taste like garbage bags and soda pop tops, but I did not put my theory to the test.) 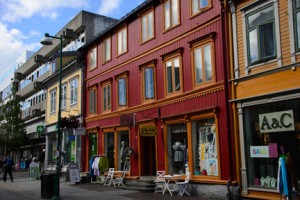 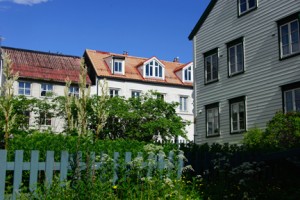 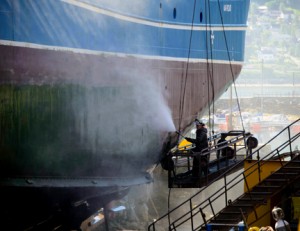 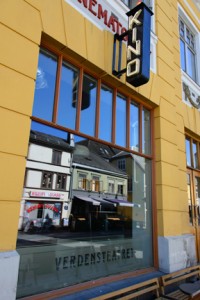 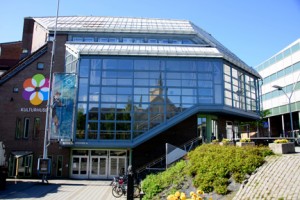 Here’s the way we experience Sun Shock here on board the beautiful Silver Cloud: we come back to our suite from an extended dinner at the end of the day, perhaps at 9:30 or 10 pm, and find the curtains tightly closed.

But a few beams of brightness leak through, and it’s all but impossible to resist opening the curtain:

Text and photos Copyright 2013, Corey Sandler. To obtain a copy of any photo, please visit the Order a Photo tab of this blog.